Note from Jane: This is the first review from our new paranormal reviewer, Amy. I know DA has been lacking in the PNR reviews so I sent out a bat signal and Amy, a long time DA reader, emailed me with interest. I think Amy will be a great fit for our blog. Initially she will review two PNRs a month.

You are the first romance author I ever remember reading. I spent a good chunk of my teen years devouring your books (and your pseudonym’s, Amanda Quick), hunting them down at my local library and bookstore. You were my “gateway author;” because of your books I discovered the romance genre and became a romance reader. In fact, I think the beginnings of my affinity for the rainy Pacific Northwest and Seattle started with your books. Yet, after college, for some reason, I stopped reading your work. I have a vague sense that maybe I started finding your stories a bit predictable, but oddly enough I can’t remember the exact reason. 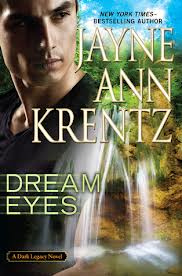 It’s hard to find a paranormal romance without vampires and shifters (which I enjoy, but have often lately underwhelmed by) and when I discovered you were writing new work in the genre, I decided to pick up Dream Eyes, which is apparently the third book in your Dark Legacy series.

Gwen Frazier sees ghosts, or rather, visions that are actually a form of lucid triggered by the psychic residue left behind in by scenes of past violence. Despite her talent and job as a psychic counselor interpreting other people’s auras and dreams, she oddly enough, treats the ghosts as unwelcome hallucinations. When she finds her old mentor Evelyn Ballinger dead and laptop missing, Evelyn’s ghost convinces a strangely reluctant Gwen that further investigation is needed. Considering Gwen’s long-term friendship with Evelyn, and that two years ago, Gwen stopped a psychic-seeking serial killer (who met her at one of Evelyn’s research studies) in the same small town, you would think there would be more suspiciousness or call to action. Instead, Gwen’s reaction is “There is nothing I can do.” It’s the ghost that reminds her she can hire a paranormal investigative firm, run by her friend-like-a-sister’s fiancé.

Judson Coppersmith is the paranormal investigator assigned to Gwen’s case. He had met her earlier through mutual friends and had been immediately drawn to her “witchy green-and-gold eyes” though was turned off when he realized she saw him as a potential client – “vulnerable and in need of her professional expertise.” [16]
He’s clearly a man’s man, who doesn’t feel that he needs help from anyone, even though his talent is experiencing the emotions of a murderer in a place where someone is killed, [86] which, as he admits, leads to nightmares. The additional fact that Judson has been experiencing his own recurring nightmares as a result of escaping a murder attempt by long-time colleagues makes him even more skittish of treating Gwen as anything other than an employer.

It’s pretty clear from the beginning that Gwen is the Reluctant-heroine-who-cannot-possibly-see-herself-as-unique-and-special-even-though-she-is-a-unicorn. As the mystery unfolds, we learn that not only did Evelyn leave everything in her will to Gwen, but she built a huge special machine in the basement of her house specifically tailored to Gwen’s abilities. Further emphasizing Gwen’s specialness is that the discovery that murderer might be linked to Gwen’s distant past as an orphan who attended a school that tended to attract the psychically enabled. It’s no surprise to learn that Gwen becomes a target for the killer, which of course, brings out Judson’s protective instincts.

Though Judson is definitely an alpha male, he is, thankfully not of the ultra-possessive, demanding, claiming-a-mate type that we so often see in other paranormal romances. Instead, what we have here is a modern alpha male who is told that the way to Gwen’s heart is to show respect and admiration for her talents. You can’t knock a hero who does that.

What I liked about this was the slow build of attraction between your protagonists. As the two spend more time together, they have long conversations where they learn more about each other. Gwen and Judson always thought before they spoke, verbally dancing around each other in almost a courtly manner. But the talking was also a bit of a drawback; there was A LOT of talking and explaining, particularly with backstory, and pivotal action scenes that happened offscreen.

The mystery was a bit convoluted and confusing, and the reveal of the murderer’s identity was less shocking than it felt like it should have been. The reliance on the long Villain Monologue at the end to connect all the seemingly random dots felt kind of lazy.
[spoiler]In fact, the reveal of the murderer as one of the minor two bit characters that we barely spent anytime with seemed to be a bit of a copout.[/spoiler]
But, for me, the main problem with this book was that the protagonists felt like copies of your heroine and hero from previous stories, even after more than a decade-long hiatus. We have the Reluctant-heroine-who-is-special-and-psychically-attuned as well as a hero who is intelligent, protective, and afraid to be vulnerable. Though they are unique individuals, to this former JAK-auto-buy reader, they don’t feel that way. We even have a similar setting, the rainy Pacific Northwest, with casual references to a restaurant’s “typical Pacific Northwest menu that ran the usual gamut from salmon and Dungeness crab.” [61]

I liked this story, but I think I’ve read too much of your work. I said at the beginning that I had a vague sense that I started finding your stories predictable, but maybe the real problem was that I found them utterly forgettable.