To be frank, it’s the title of this book which caught my attention and made me want to read it. In a world full of Duke/Baby/Scandal/Duchess/Mistress/Pregnancy titles, this one stands out like a hooker in church. But it wasn’t just the title that grabbed me. The idea of a landscape architect and a concert pianist finding their way to love sounded fun and intriguing as well. 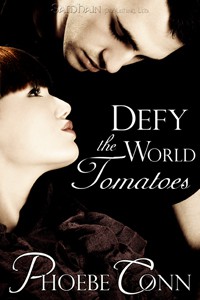 Somehow the fact that Griffin Moore is also a pseudo Interpol agent slipped my attention. The secondary romance between Darcy MacLeod’s business partner Christy Joy and sweet charter boat captain Jeremy added still more length. Oh and there’s the bit about Griffin owning the building where Defy the World Tomatoes is located and dropping the bomb on the two women about them having to move out in six months when their lease is over. Then there’s Christy Joy’s ex husband lurking in the wings and her daughter Twink plus all the assorted part time staff at Tomatoes. And the torrential downpour which threatened to flood the business. And the details of the landscaping Darcy does for Griffin. Plus all the sex. Lots of sex. And…and….

And that’s what ultimately brings down the grade. Too much. There’s just too much going on here. The characters are well drawn, the situations are interesting. I love the fact that time is spent showing Darcy at her job and Griffin at his. But no sooner would one issue be introduced then it gets followed by two more. Yet, things are never really resolved. They just meander along some more.

The title first lead me to believe that this would be a cute contemporary with lots of laughs. Well there are laughs but there’s darkness as well. Some intense darkness at the end after which comes some of the meandering then it’s time for some serious emotional issues between Griffin and Darcy then she finds a way to reach out to him and suddenly everything’s fine. But I didn’t feel that some things had been resolved.

Because the relationship between Griffin and Darcy kept me off balance for most of the book. They’d be fine then one would act strangely or off putting and the other would question their future, then they’re back together, then Events Happen and it’s like an arctic ice flow between them. Darcy complains that Griffin is bossy and demands his own way and she doesn’t want to lose herself in his life and work but by the end of the book, she hasn’t truly resolved this to my satisfaction. Griffin keeps telling Darcy how wonderful she is and how he hasn’t let any woman but her into his life this much and how they won’t have secrets from each other. Then he holds secrets such as the insignificant reason he really wants to use the space occupied by Tomatoes plus – minor detail here – the fact that he’s an Interpol agent! Were I Darcy, I’d be wondering what else he has up his sleeve.

The whole book just seemed this juxtaposition of unfocused events that, here I’m using this term again, wandered along. At times, the story felt endless and not in a good way. Things just didn’t seem to really go together and the emotional tone veered wildly. Like sitting down to a 10 course meal at a fine French restaurant and along the way having Moo Goo Gai Pan then Tex Mex slapped on a plate in front of you. Each is fine but it’s not what I expected when I entered the joint. The notes I wrote after I finished included the words bizarre and weird. “Nuff said. C