REVIEW: Dead Man and the Restless Spirits by Lou Harper 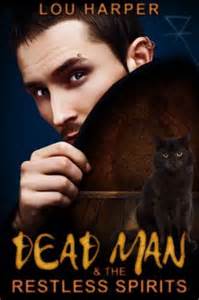 Dying sucks hairy monkey balls, even when you’re not the stiff.

Denton Mills has a secret: he can see dead people. Or rather, how they died. It’s quite a drag in a city like Chicago, teeming with the echoes of the no-longer living. Rather than whine about it, Denton has learned to live with his troublesome talent. His adaptability comes in handy when he meets his enigmatic new neighbor.

Bran Maurell catches Denton’s eye right away, but unfortunately Mr. Tall, Dark, and Mysterious is as standoffish as he is alluring. However, after an unexpected introduction from Bran’s cat brings the two men together, Denton discovers they have a mutual interest in the spirit world. Herbalist by day, Bran moonlights as a witch, performing house cleansings for a fee.

From Bran, Denton learns that his knack for interacting with the dead qualifies him as a necromancer. It makes good business sense for them to team up and rid Chicago of its pesky spirits one grateful client at a time. Amongst ghostly adventures the attraction between the men is impossible to ignore. They seem like perfect partners—unless Bran’s not-so-little secret comes between them.

I usually enjoy your books quite a bit. And Jamie from your novelette/novella “Academic Pursuits” brought something unique to m/m genre, in my opinion. He was the guy who enjoyed having a lot of sex with different guys and did not do it because he had any psychological issues.

I really loved “Spirit Sanguine”, the first book in this series, so of course I was eager to read this book. This book is structured similarly to “Spirit Sanguine” – it has three stories with Denton and Bran dealing with different situations, different cases, but their relationship is shown in continuity. It progresses a little with every novelette. Unfortunately this book did not work for me as well as the first one.

As the blurb tells us, Denton appeared briefly in “Spirit Sanguine”. I was so curious to find out what hidden depths his character might have in this story. Sadly, I did not think that in this book any depth was added to his character. In fact besides him finding love I was not sure what new things we learned about his character. And that’s despite the fact that Denton was the third person narrator in this novel. We did learn that he is funny, but I could see that even from his appearance in the first book.

The humor in this book worked very well for me. I did not smile or chuckle as often as I did when I was reading “Spirit Sanguine”, but when I did, it was perfect and I thought it was very appropriate.

Denton and Bran were very good together and I thought that we learned much more about Bran than we did about Denton. I thought the author did a lovely job invoking the association with Professor Severus Snape from “Harry Potter” when she was writing about Bran. No, Bran is not a rewritten Snape at all, he is just tall, dark and snarky and as blurb tells you he is a witch and a herbalist. But if you read “Potter” just once, you won’t miss such association. I was obsessed with Potterverse for years so I did not have to look very hard.  I was a little disappointed though that the story felt the need to call Bran “Snape” once. Seriously, there was no need for it, let’s trust the readers that they will see it IMO. I will leave it to you to find couple other less obvious references to Potterverse in the book. I thought that Bran’s reasons to be standoffish were very well done and those reasons were original enough, or at least I have not seen the particular plot twist as it was done here in any other paranormal story that I have read. Despite the fact that I did not feel that I got to know Denton much better than I did during his brief appearance in the first book (this is my main reason for the grading the book the way I did), I still loved the chemistry between the guys. I also have to note that while the story does not have many sex scenes, what we did get was very hot in the best sense of the word IMO.

I also have to say that I was also disappointed with the twist involving Bran’s mother. I was disappointed not for the reasons you may think. Bran’s mother is a very likeable and funny character, and in the brief time she appeared on the page I really liked her. However, one of her actions, although it was not evil, disappointed me a lot [spoiler] basically she cast a spell for Bran to attract his perfect soul mate. I thought that the book was the story of natural progression of feelings between the guys and I really liked how during their interactions they seem to like each other more and more. I was disappointed that spell brought them together instead of them just meeting accidentally as potential roommates. Granted Bran’s mother said that no magic would hold them together if they did not like each other, but I was disappointed simply by the fact that the spell was cast no matter how unusual it was.[/spoiler]
Grade : C.

→ Sirius
Previous article: REVIEW: Come as You Are by Theresa Weir
Next Post: Daily Deals: Romantic suspense, a Canadian assassin (how can that be – they are all nice), and others including another Sarah Morgan