The first book I read of yours was a contemporary romance which I enjoyed and hoped to see more of your work in that area. When your book, Darkest Caress, was released on NetGalley I was intrigued because it was not contemporary romance but instead, a paranormal. I am constantly on the lookout for a new paranormal author. While the work was competent, I think my tastes are too jaded at this point to find a competent story compelling. 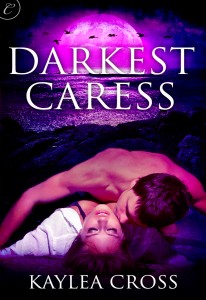 Darkest Caress relies on the mate bond, an old prophecy, a small band of good guys (actual brothers in this case) who will defeat a bad man and his army form the basis of its world building.  The “others” are individuals who apparently feed off the energy of others.  There is some play with the concept that every person controls their aura which is fed by their internal energies which the host can decide to be good or evil.  This was unsubtly demonstrated through one non essential secondary character. (First he was bad… and then … after some reflection and intervention he was suddenly good.  It was like an injection of super clozapine).

Liv Farrell, realtor and part time piano teacher, meets Daegan Blackwell, a mysterious and wealthy potential purchaser of a million dollar home situated on the coast in Vancouver. Daegan is an Empowered and he and his three brothers form a triumvirate that will someday battle Xavier who seeks to become the Obsidian Lord. What exactly they will be fighting over is not fully explained. I suppose the soul of humankind or something. I’ve never really understood why any immortal being would want control human kind. Wouldn’t they want to just wipe us out? I guess in this circumstance, humans serve as food. The energy of a human is a power source for the “others”.

Liv is also Empowered, which she would have to be in order to be Daegan’s mate.  Darkest Caress does allow the characters to struggle with the mate bond but they can’t be too far apart because of the Heat Cycle.  The Heat Cycle causes the parties pain when they are apart and nothing short of bonding will abate it.  Forced love!

Daegen is immediately in lust and, I guess, love, but allows that Liv needs time to adjust to the knowledge that she has a supernatural power as do others and that they are destined to be together.  The problem is that Liv’s struggle with the mate bond places everyone in danger making her refusal to accept the inevitable pairing.  The authorial choice in this regards felt unfortunate to me. It was easy to place the blame on Liv for a negative outcome but it also made Daegan’s self sacrifice look foolish as well.  In fact, at some times I wrote in my margin that he was portraying the too stupid to live role. At one point, after Daegan has marked her which endangers her life, he purposely leaves her and his brother has to fill in the details.  Even after she knows about being empowered, the mate bond, the Heat Cycle, and the power struggle, Daegen still refuses to give her the full picture.  I couldn’t believe he was trying out half truths at this point in the name of protection and allowing her free choice. It was ridiculous.

I also wondered strongly about the need for DNA evidence that Liv purportedly needed to prove she was an Empowered.  It might have made sense if Liv was a scientist but she wasn’t and thus this idea that DNA would convince her where her own senses could not seemed odd.

Every movement seemed telegraphed with a heavy hand and the attempts at intrigue came off hokey instead of suspenseful. For instance, one character thinks to himself “fucking riddles … always more riddles” in regard to this line: The Obsidian Lord shall confront the Empowered who embodies the reflection of what he once was.”  The character goes on to lament that “[h]e didn’t pretend to fully under the dark prophecy.”  The riddle isn’t that confusing particularly when it is known that the Obsidian Lord is an Empowered male who lost his mate.

If a reader is a fan of the JR Ward and Lara Adrian series, and is jonesing for something similar, this may fit the bill. I appreciated that this was not a vampire story but I felt like the worldbuilding relied on worn tropes and failed to be presented in a fresh way. C