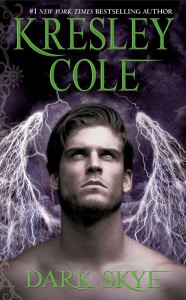 Back in 2008, Jane wrote about the romance trope subversion found in the “Immortals After Dark” series, in which the conventional male/female roles are often flipped. That continues in this story, which features a completely inexperienced hero and a heroine who’s been around the block quite a few times in an immortal lifespan. Unfortunately, it doesn’t save the book from being kind of meh.

Most Lore immortals have to wait centuries for their fated mates to turn up, but the Vrekener prince Thronos is just a boy when he recognizes his in 9 year old Melanthe (Lanthe), one of the Sorceri. Their people are enemies — the righteous Vrekeners make it their business to steal powers from the supposedly evil Sorceri — but none of that matters… then.

‘To me, you smell like no one else in the world ever has, or ever will.’ His gray irises glowed silver with emotion. A breeze ruffled his sandy brown hair. ‘It means you and I are going to be best friends. When we grow up, we’ll be… more.’

They do indeed become best friends, for a short time. But though Melanthe is Thronos’s fated mate, he is not necessarily hers. ‘Sorceri don’t have mates’ and ‘Sorceri don’t believe in fate,’ she asserts. In any event, while the adult Thronos desperately searches for Melanthe for centuries, literally unable to have sex with any other woman, she feels no such restriction. Instead she suffers a non-specific loneliness and longing for love that has made her something of a Lore joke, since the immortals she sleeps with often take advantage of her and steal her powers. Nonetheless, she refuses to be shamed by Thronos, who is not only a virgin but from an extremely repressed society. (Even kissing before marriage is considered an “offendment” — you can guess how they feel about masturbation.)

If you’ve read Kiss of a Demon King, you’ll know that this is only a small part of Thronos and Lanthe’s complicated history: there’s betrayal and hurt and bitterness up the wazoo for these two. But as it turns out — rather disappointingly — those issues are more like Big Misunderstandings: once they learn the truths behind their past, the real conflicts between the fated lovers are Lanthe’s sexual history, and Thronos’s incredibly uptight and controlling plans for her.

The story is an Odyssey, an almost Yellow-Submarine-esque series of adventures in strange dimensions. The pair begins traveling together (initially as prisoner and captive) after the destruction of the Order prison they were both in. (The beginning is pretty abrupt: for backstory on their escape, see Dreams of a Dark Warrior and Demon from the Dark.  Chronologically, this is set during the events of the previous five books in the series.) The trip is not only highly dangerous but full of portents and allegorical elements. I didn’t find the adventures or world-building here very enthralling. Much of what happens is highly convenient in terms of their relationship growth — It’s almost as if someone deliberately created a bizarre world just to get these two together! — and there are what seems like dozens of random, cryptic portents and prophecies to be interpreted.

What happens in their relationship is somewhat more compelling. The rigid Thronos begins to loosen up, particularly as he becomes inadvertently exposed to his demonic roots. (His winged, sky-living people claim angelic status, ignoring all signs of their demonic origins.) And Lanthe once again begins to trust him and to believe in his feelings for her. There’s some well-imagined, gut-punching angst, and interesting themes: Thronos learning to see shades of gray, Lanthe reclaiming her power as a sorcerer, both of them learning to forgive, accept the past, and deliberately choose each other.

But I kept being tripped up by the actual prose. I don’t recall ever having this problem with the series before, but the writing uses many short, declaratory sentences, tends towards telling rather than showing, and is riddled with exclamation points. Consequently, even some of the most dramatic moments of the book felt flat. There was much less snark and sparkle than I expect from this series, and both characters feel like paler versions of previous ones.

It sadly added up to no more than readable and intermittently emotional for me. Very sadly, since like many other readers, I was just dying for this couple’s story. There is movement towards the overall Accession plot, but I’ve never been as interested in that as I’ve been in the romance and couple dynamics.

This is a long series, but considerable backstory is given, so you could probably enter here if you wanted to. (And perhaps it would seem less disappointing if you did?) I haven’t read the two books immediately preceding this one yet, but was able to follow the threads well enough. C