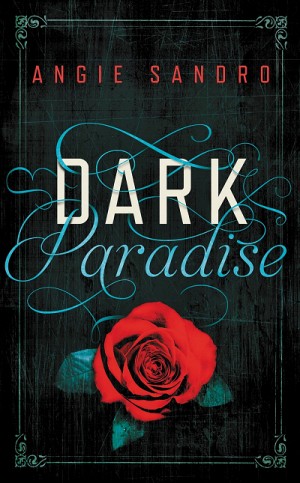 When I first heard about your debut, my interest was piqued. A non-contemporary romance NA? Featuring non-white characters? Give it to me! Interests in diversity aside, I’m curious to see if NA can expand beyond contemporary romance successfully. Dark Paradise seemed promising.

Set in the Louisiana bayou, Dark Paradise tells the story of Malaise “Mala” LaCroix, the last in a long line of supposed witches. As for Mala herself, she thinks that reputation is just a bunch of nonsense. People look down on their family because her mother is the town prostitute and everyone knows it. Well, that and the fact that the LaCroix line is a result of a relationship between a plantation owner and his slave.

But it turns out that it’s not just gossip. When Mala finds the body of a dead girl floating in the bayou, the girl’s ghost begins haunting her. And of course, the dead girl’s brother soon comes around, accusing Mala of being responsible. (It does look suspicious. The body was found floating in LaCroix land, after all.) To further complicate matters, Mala and the brother, Landry, have an undeniable attraction and connection — one that she’s denied and that he’s fostered for many years.

The thing that struck me about Dark Paradise is the setting. It’s alive. I can’t speak about authenticity as I’ve never been to the Louisiana bayou but I could easily picture this small town in the deep South. Where class lines run deep, and those class lines may run along racial lines. Where the religious thump their bibles and judge. Where everyone knows your business and one misstep can lead to your ostracization.

As an aside, I really liked how the novel acknowledged that it was possible for a visibly black person to have pale-skinned relatives who passed for, and likely identified, as white. I feel like this point is often overlooked in books featuring black characters that live in the U.S. In Dark Paradise, Mala even talks about how you can see the red in her own hair.

Despite these things that I did like, I was left feeling lukewarm towards the book. I thought the characterization left much to be desired. At times I didn’t understand why they chose to do certain things and sometimes those choices contradicted convictions that had been voiced five pages before! That said, a large portion of this can be attributed to the relationship between Mala and Landry. They’re attracted to each other! He thinks she killed his sister in some sort of over the top Satanic ritual! (Why is it always Satanic ritual?) Her friends think he’s a player that just wants in her pants! His parents think she’s a witch who’s ensorcelled him! She thinks he’s a liar! There’s also the part where he stalks her and scares her half to death but it’s okay, he didn’t mean it. He was just torn up about his sister! I don’t know about you but I find that kind of back and forth exhausting. Make up your damn minds, people.

The other complaint I have is less concrete. As a suspense plot, I think the pieces are all there. There are multiple leads and multiple suspects for the murder. But it all seems to unfold in a jumbled mess. Partially because of the shaky characterization. Partially because it’s overshadowed by the burgeoning of Mala’s powers. You see, the LaCroix witches come into their full power when their mother dies. Mala’s mother has foreseen her death and warns Mala to prepare as the ghost haunting signals that the time is fast approaching. There’s also Mala’s great-aunt who is a powerful witch (enter some handwaving about twins to explain how she could have that power if the power is meant to be a mother-to-daughter thing). And partially because of the hot and cold aspects of Mala and Landry’s relationship — along with the other sort-of-but-not-really love interest, Georgie. The book tries to do a lot with all of these aspects and as a result, I think fails to do them justice.

Dark Paradise is a very different kind of read. The setting prevents it from being outright urban fantasy, and the suspense and fantasy aspects separate it from other NA novels. While I liked how family plays an important role, I also wish we’d seen more of Mala pursuing her dreams in a criminal justice career. Sure, it came up in the beginning but as the book continues, those goals fall along the wayside. I get that she has some immediate concerns that need attention but I hope those don’t get tossed away because she’s set to become some powerful hoodoo queen. But for readers who pick up NA novels for the relationship, I’m going to have to say that the romance between Mala and Landry left me cold. C