The opening scene of the book is intriguing because it doomed a character to a horrible fate, or so he believes.  Keenan is an angel of death and he has been dispatched to harvest the soul of Nicole St. James.  He finds her suffering a horrific attack at the hands of a vampire and Keenan not only hesitates but transfers his death touch to the vampire thus violating his two thousand year charge.  One mistake plummets Keenan into the ranks of the Fallen, his wings stripped and his entrance to the heavens barred. 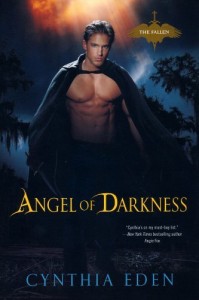 Chapter One starts six months later.  “The rage began to heat his blood because it shouldn’t have been like this.”  Keenan has been hunting Nicole for months.  He has been told that she is the key to his redemption which he believes to be his path to grace and into the heavenly hosts.   Chapter One also begins the path of confusion for me.  Keenan’s motivations and actions are inconsistent and changeable. I suppose some of this could be chalked up to the uncertainty and newness of being fallen, but the mutability of his behavior, particularly toward Nicole, was unsettling and not in a good way.

Another problem is the way in which only parts of the entire world are shown in this book.  Neither Nicole nor Keenan know much about the paranormal world but there are vampires, fallen angels with powers, shapeshifters, and higher powers with unknown motives.  Each time they turn the corner, the body count gets higher and a new discovery about this strange world they’ve been thrust into arrives.  But if Keenan has been alive for 2,000 years, why is everything such a mystery to him.  Is he that myopic or obtuse?

Also unexplained is the heroine’s transformation from school teacher to vamp, as in scantily clad, high heeled, bar trolling vamp.  Keenan describes her pre vampiric state as being staid and somewhat conservative.  And in six months (which are not in the book but occur between the prologue and Chapter one) she turns from normal school teacher to angry vamp (in all meanings of the word).  This seems so cliched and unnecessary.  Like she all of a sudden has to look like Lara Croft complete with the belly baring leathers and tight shirt once she’s a blood sucker?

The strength of their feelings as written toward each other don’t match the overall story.  They barely know each other.  They are
running from demons, she’s learning he is an angel, she is scared of the vamps who had control of her.  He has negative feelings toward her because she’s supposedly at fault for his fall (DUDE, YOU DECIDED TO SAVE HER) and yet they are all over each other.  The whys of their attraction escaped me. The emotional character arcs seemed lost as well. The strength of the book lay within the suspense structure.

The plot, although with many parties, was fairly well constructed.  Keenan, as a newly fallen angel, is unaware that he has any powers. Angels are the most powerful beings in the paranormal hierarchy.  To get more powerful, you need only the pure blood of the angel.  Keenan becomes a target.  Nicole is one as well because of what she had to do to survive during her first six months as a vampire. Both are helped out by another fallen Angel, Sam, who is actually more interesting than both Keenan and Nicole.  Sam’s motivations for helping Keenan are murky but without Sam, Keenan would be angel dust and Nicole would be dead.  The focus of the book was on the action narrative and the lust/sex/love sections felt tacked on.  I also didn’t feel like I left the story with a greater understanding of the world than when I entered it. A lot of the world building was in the existence of the characters rather than the setting which made it feel a bit more disjointed.

I think the whole story would have worked better if it was structured more like an urban fantasy and the romance between Nicole and Keenan involved slowly.  The worldbuilding breaks no ground. It was the romance that I felt the book was tired and cliched whereas the action plot kept me turning the pages.  C