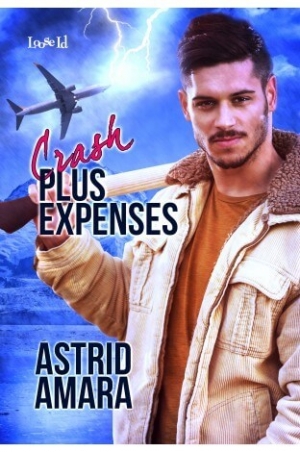 It’s also a problem because he knows there’s a secret behind Connor Katz’s past, a reason the man’s sister is paying beaucoup bucks to have him followed, a reason Connor appears so quiet on the outside, yet seems lit like a fire from within. Dan needs to know Connor’s secret.

But if they survive the crash, how on earth can Dan get to know the mysteries of a man he’s been in love with from afar without admitting he’s a private eye who’s watched his every move?

Dear Astrid Amara, every time I hear that you are about to release a new story, well, let’s just say I want for that story to fall in my lap that very second. Unfortunately this one ended up being a mixed bag for me. I was prepared for the guys to experience a fast attraction because the story was a novella, and I knew that you would do your very best to make that believable for me. I was prepared for the fact that the story would feature just the beginning of a relationship because you had mentioned that you were writing this story in two parts.  Apparently we will meet Dan and Connor again in your yearly Hanukkah offering.  And I am usually okay with a well written story which shows only the beginning of the relationship even if there is no sequel.  I did not have a problem with any of this.

However, I had some problems with the story structure, and more importantly I hate the “oh, let me fail to say something, which makes the other guy misinterpret what I did say based on that incomplete information” plot device.  You decided to use it and that’s your artistic choice, but boy did it not work for me.

But let’s start from the beginning. Actually, the beginning started not to work for me right after the first couple of paragraphs. Dan and Connor are on a plane which is going down pretty fast and it is obvious it will crash.  I thank the higher powers that I do not know what a person who knows they are likely to die in the next few moments may be thinking, but I cannot buy that in those few moments they would decide to tell us the whole setup for the story. Why Dan Lewinski the PI decided to accept the assignment of shadowing Connor Katz, making sure he was not exhibiting a “pattern of unhealthy behavior,” (paraphrase) and let Connor’s estranged sister know if there were any problems. I get that the writer needed to provide this information to the reader, and because the story is about surviving the crash, giving the back story later may have felt like an even worse info-dump. However, the way it was done just did not work for me, because it made the urgency of those last moments disappear. It started well:

Rhino horn in the eye.

Dan Lewinski had fantasies of his preferred method of death. If forced to shed this mortal coil, he wanted to exuviate in fanfare and aplomb.

Dying in a fiery inferno falling from ten thousand feet had some panache, granted. It was way cooler than, say, embolism or choking on a pretzel.

But dying  in a plane crash took a lot of time.  Time when a man like Dan would think things like I didn’t pay that utility bill, and I never made amends with my father, and Wait, I am thirty years old  and still single. I don’t actually want to die right this moment”

Apparently getting ready to die in a plane crash took *so much* time that Dan has time to share all of this and more with the readers:

“He’d never officially met Connor, of course. A year ago, Dan and his business partner, Frankie Fisher, had been hired by Connor’s estranged older sister to keep tabs on Connor and alert her if he engaged in any suspicious or dangerous behavior.

Clarity as to what constituted suspicious was never provided by Sheila Cole-Bergman. She remained downright sketchy about the whole assignment.”

Once the back story was completed, the narrative became very engaging, I rooted for Connor and Dan when they were trying to find a way to survive the Alaskan wilderness and I did not have to stretch my disbelief too far when some help for them came along the way.

I found both guys to be very likeable and sympathetic. I liked how the story tried to help me deal with their fast attraction in ways other than just evoking “dangerous circumstances – heightened feelings and awareness of each other”.

What I did not like was the way the conflict in this story was presented. Basically Dan is worried that when Connor learns that Dan had been watching his every move for a while, Connor would not want anything to do with him. Dan knows he has to tell the truth and fast.

“If he was ever to be Connor’s friend, Dan had to stop lying. But how could he contemplate such a revelation now, when there was only the two of them against the miserable wilderness and their lives were in great peril? Surely lies would be all right until they were in danger.”

Alas, he decides not to. Why? I was not sure. The excuse of being in shock and not thinking clearly after the crash worked for a while. After all, they were hurt after the accident and I could forgive Dan for not thinking very clearly.

The best (by which I mean the worst) example of miscommunication came after Connor knew that Dan was hired to watch him. Connor was worried that the people he had been running from for years had hired him. The secret which was mentioned in the blurb really did mean that Connor’s physical safety was a huge issue even at that point in his life. Then, when Connor asks Dan, *point blank* who hired him, Dan basically says he cannot answer because he needs to protect his client. At this point I was doing all the head-desk movements. Of course Connor misinterprets Dan’s answer and believes that the people who are a threat to him hired Dan, and of course that causes Connor to separate himself from Dan and put himself in even more danger. Picture a very irritated Sirius at that point in the story, which comes close to the end.

Still, I liked the guys so much, and I loved Dan’s begging for forgiveness. It was very sweet.

Because the characters were so sympathetic, I cannot grade it lower than C.