As a lover of intertwined books and series, I appreciate the purpose behind this book: to allow long time readers of the Colters’ Legacy series a chance to revisit past couples. While I think that the intent to give readers what they want is a great one, I found Colters’ Promise to be similar to reading a multi-chapter epilogue. I think that passionate lovers of the series will be quite satisfied, but I prefer more tension in my romances than this book had. 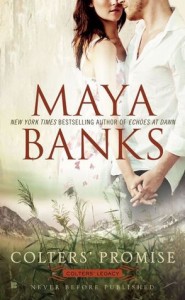 The book opens in Clyde, Colorado, as Lily Colter has an unexpected pregnancy confirmed. She was not expecting to become pregnant, and had, in fact lost a daughter earlier in her life to SIDS and later became homeless. Lily and her husbands, Seth, Michael and Dillon (yes, she’s in a polyamorous relationship with brothers) had been using birth control because Lily was not ready to be pregnant. She’s shocked by the pregnancy and very worried that something will happen to this baby too. She is stymied by this news, and is not ready to share her secret with her husbands.

Holly Colter, the mother of Lily’s husbands is thrilled that all of her kids will be home for Christmas. She’s decided to make Christmas dinner, which will be feat considering that Holly is a well known failure at cooking. She wrangles Lily into teaching her to cook.

Meanwhile, Callie, the Colters’ youngest daughter is sick with strep throat. Her husband, Max, has gone to take care of his sister, Lauren, who has been abused by a boyfriend. Callie is determined that Lauren should come to stay with her and Max until Lauren is feeling stronger and more confident. She and Max retrieve Lauren and begin the slow process of helping her recovery her sense of self-worth.

That’s really all of the storylines in the book. Both Callie and Holly end up being sick at some point during the books, which I think is meant to illustrate how much the Colter men (and Callie’s husband – we’ll call him an honorary Colter) cherish their women. And I suppose, if the fantasy that you have is for your alpha man to take care of you, I think that this book works. It’s mostly about the women being “independent and strong” while still having their alpha husbands say things like, “be sure you call when you get there, you know how we worry” and having to hide their cars so that their husbands won’t see them and come to discover what they are doing. Mostly, I think that the Colter men would be happier if their women were home, doing women things, and never ventured out anywhere.

You certainly excel at writing extremely hot love scenes, and each of the scenes did show the deep and abiding love that the Colter men have for their women. I believed the relationships between all of the characters, even as I tried hard to not be unnerved by brothers being OK with sharing one woman at the same time.

I believe that for your longtime readers of the Colters’ Legacy series, this book is going to be extremely satisfying. Although I’ve read the entire series, I found the lack of tension and what I perceived as the overbearing nature of the Colter men detracted from my enjoyment of the story. As I said in the beginning, this book feels very much like an epilogue, rather than a standalone novel. I’m giving Colter’s Promise a C.