I tried to read, but did not finish, the first book in the Barker Triplet’s trilogy.  When the second book came along, I wanted to give this self published series another chance.  “Collide” is a re-united lover story.  The primary problem I had is that it felt melodramatic and the characters acted more like they were teenagers than adults. 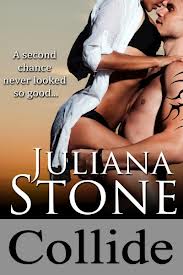 Bobbi-Jo Barker and Shane Gallagher were high school lovers with a tempestuous relationship.  They would fight, break up, reconcile and repeat their behaviors continuously until one fight involved too many hurtful actions and they split for good.  This led Shane into a downward spiral where he ultimately ended up spending his time in “jail” for three years (actually this should be prison, jail is short term confinement).

Five years later, Shane is trying to remake a life for himself in his hometown of New Waterford, Michigan, and Bobbi-Jo is struggling with the major upheavals in her own life.  The book started out on a sour note for me. Bobbi-Jo jilts her fiancé at the altar, doesn’t contact him and runs off to a bar where she finds Shane and Shane takes her home. Throughout the book fiance Gerald is mocked for being uptight and boring.  But being boring really doesn’t deserve to be humiliated in your hometown by a) being stood up at the altar and b) having the entire town know that your wife to be went home from a bar with her high school sweetheart.

As a result of the jilting, Bobbi-Jo is fired from her “junior clerk” position at the law firm where Gerald works.  So Bobbi Jo is out of a job, out of a fiance and discovering that she still has feelings for her high school boyfriend who broke her heart.  The most logical course of action for Bobbi Jo is to fall in bed with Shane again.  Shane shows some feelings of animosity toward Bobbi Jo in the beginning but those feelings are quickly tossed aside as Shane decides that he and Bobbi Jo belong together.  The problem that haunts their new beginning is Bobbi Jo’s refusal to come clean about a big secret.

While the book deals with second chances and growing up, I didn’t feel like Bobbi Jo had come very far from her high school days.  The change in the relationship dynamic comes primarily from Shane refusing to fall prey to the emotional rages that dominated him prior to prison. I wish Bobbi Jo had undergone the same emotional transformation.  I also though the reveal of her secret  came far too late in the story, particularly given what drove them apart in the first place.  The secret brought up an issue that resonated with the same core issues of their past and the text leading up to it didn’t give me confidence that this situation could be resolved as easily as the post secret text wanted me to believe.

Shane’s reformed bad boy is an appealing archetype but he didn’t bring anything new to the genre, either.  What I did like was the healing that took place amongst Bobbi Jo and Shane’s families.  Shane had a troubled upbringing and was at odds with his stepmother but through a concerted effort on all their parts, Shane began the process of reconciliation.  Bobbi Jo’s family reconciliation started with Book 1 and her sister’s, Billie, return to Michigan.  But the third triplet, Betty, is still causing worry for the Barker family.