I am still surprised at how little I liked your latest Western-lite book, Close Enough to Touch. I’ve enjoyed many of your books–especially the sexy Bad Boys Do (reviewed here, along with the other Donovan books, by Robin) and the very funny  Lead Me On (given a B+ here by Jane)– and you’re hilarious on Twitter. This book, however, wasn’t funny, sexy, or probable. The leads, Cole and Grace, are ill-suited sad sacks faltering through life who meet in a small Western town and share rough sex and peevish conversation. It’s rare I’m raring to finish a book; this one I was pleased to plow through. 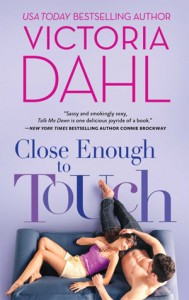 Grace Barrett slunk away from Los Angeles where, poor baby, she lost her true self pandering to her ex-boyfriend and his self-absorbed clients in big bad Hollywood. Over the past ten years, Grace’s gone from homeless teen to small time make-up artist–she kinda liked herself at that stage–to big time makeup artist. Sadly, she also acquired a blowhard boyfriend, Scott.  Scott not only cheated on her and hooked her up with soulless movie big wigs (professionally); he dumped her and threw her out of the home they shared. Grace, at a low point, stole scummy Scott’s  wallet–she figured he owed her a bit of cash. Unfortunately for Grace, when she then crashed at an old friend’s place, the dude threw a wild shindig where some asswipe stole Grace’s purse–and Scott’s wallet which had eight grand in it. Scott threatened to have Grace arrested; furthermore a producer she ticked off –she lectured the non-gent about his abusive treatment of his girlfriend, a famous actress–told the movie world Grace was a quarrelsome drunk and now no one will hire her. Grace, feeling defeated by LA and life skips town and heads for Jackson, Wyoming.

Why Jackson? Well, her cantankerous great-aunt Rayleen has offered her an unfurnished apartment in a building Rayleen owns rent-free for a few months. Rayleen doesn’t know Grace at all; she’s only letting Grace stay at the Stud Farm–so called because Rayleen usually only rents to hot young guys–as a favor to her sister Rose, Grace’s grandmother.  When Grace arrives and asks Rayleen for the key, Rayleen sums up all that sucks for Grace.

Her silver eyebrows rose and she finally looked up. A sharp green gaze took Grace in with one flick of her eyes. “Thought you’d be knocked up.”

Her eyes fell back to the table and she resumed her card flipping. “A grown woman who can’t keep a job or support herself and has to write to her grandmother to ask for money? I figured you were out of commission. But you look perfectly fine to me.”

….“I was living with someone and it didn’t work out. With the economy—”

“Who told you could ever depend on a man for anything?”

“You probably learned that from your idiot mama. That woman doesn’t have the sense God gave a dog. And dogs ain’t exactly nature’s Einsteins, are they?”

A strange, hot wash of emotion trickled along Grace’s skin. Fury, certainly, but it was mixed up with shame and the awful burn of truth spoken bluntly.

“Listen,” she pushed out past clenched teeth. “If you don’t want me here, say so and I’ll leave right now.”

….“Listen, honey,” Rayleen said, finally setting down the cards. “It’s not a question of me wanting you here. I don’t know you from Adam. But I’m willing to have you here because I have an empty apartment and Rose asked me for a favor. You pay the utilities and you can stay. But just through ski season. August is one thing, but come December? I’ve got my eye on a handsome snowboarding instructor I had to turn away last year.”

….“You’re pissed, ain’t ya? I like that. Pride’s a beautiful thing, but you’ve got to ask yourself where your pride has gotten you up to this point. Because as far as I can tell, it’s gotten you homeless and bitter. You enjoying the taste of that?”

Once Grace takes the key, she’s no longer homeless. But she’s still bitter and, for much of the novel, she stays that way.

Grace’s bitterness doesn’t turn off the injured cowboy across the hall from her, however. Cole Rawlins wants to jump her bones the minute he hears Grace cursing and kicking her suitcase in the hall outside his door. Cole, who had a horse fall on him over a year ago, still hasn’t gotten back in the saddle. His leg and pelvis, which were busted to hell in the accident, still hurt like a bitch and his long-term dream of buying the ranch he’s worked on most his whole life is ominously iffy. Grace looks like just the distraction he needs.

That girl was going to be trouble. If the purple layers in her dark, choppy hair didn’t make that clear, the hard glint in her eyes certainly did. He knew that look. He’d seen it before. And despite his image as the wholesome and friendly good ol’ cowboy, that look stirred something in him. It was like a dare. A challenge.

And he did love a challenge.

Grace turns out to be no challenge to bed–Cole’s riding (for the first time since his accident) Grace between his sheets within a few weeks of her coming to town. No Grace is, drum roll please, a challenge to get close to. She keeps her heart slammed shut to all but her friend Merry. (Is it me or do the names in this story seem a bit cornball?) Grace wants Cole to fuck her but not care for her. Cole wants more; Grace continually pushes him away.

She felt him lift his head and look at her, but she kept her eyes closed and turned her face away.

His fingers curled a little tighter against her, but when he bent his head again, his mouth was just as gentle. He teased her, tempting her to feel something more than just sexual need.

His lips slid down to her ribs, lingering over the tattoo he couldn’t stop asking about. It was as if he wanted to collect details about her for his own amusement. Why?

“Harder,” she rasped, sliding her hand over his to push his fingers more firmly against her. “Cole.”

“Shh,” he whispered against her skin. “It’s okay.”

She pulled his hand higher and forced it beneath her panties. She wound her free hand into his hair and squeezed her fist tight. “More,” she ordered. “No.” He twisted his hand up and captured her wrist. She pulled his hair tighter until he pushed her down into the mattress.

Grace turned her body, turning away from him, struggling, forcing him to treat her roughly. He yanked her back against his body, her ass pressed to his cock.

When he shoved her to her stomach and fucked her, Grace was smiling. She didn’t need gentleness from anyone. She just needed this.

I didn’t need any of it. The two are joyless, clinging hard to pain from their pasts. Cole, in particular, is stuck on a mistake he made when he was young. He’s thirty-four, never had a serious relationship, is angry at his long dead dad, and unable to think of any future for himself other than the one he’d always assumed he’d have.  Grace can’t figure out any solutions to her problems that don’t require oodles of brooding and self-flagellation. Depressed doesn’t equal deep–Grace and Cole act in ways that are predictable and indulgent. Their predicaments–both singularly and together–failed to flag my interest.

I also didn’t like the silver screen induced conflict between the two. Cole loathes all things Tinsel Town ever since his dick led him, when he was twenty-one, to grief  at the hands of a bitchy Kathryn Bigelow-esque director. When Grace suggests the ranch Cole longs to own as the perfect place for scenes in same director’s latest movie, Cole is an utter ass about it even though it offers rewarding work for Grace. For her part, Grace seethes with misplaced anger when she discovers Cole’s kept his long ago Hollywood heartbreak from her.  By the time they did finally pull their heads out of their respective rumps and worked toward some sort of adult happy ending, it was too little, too late, and too far-fetched.

I do like your way with dialog; it’s a strength of this novel. The way the characters talk to one another is realistic and engaging. Rayleen, in particular, is shown by the things she says to be a woman with a bigger heart than she wishes any one to see. I also enjoyed the banter between Cole and the other “studs” in the book. These guys talk like guys–I found the male shooting the shit to be more believable than the burdened blather Cole and Grace share. And I was left wondering about Eve, Grace’s boss in Jackson. She comes across as a complex woman with a story worth telling.

When I finished this book, I paged through my favorite of your contemporaries, Bad Boys Do. That book has likable leads, verve and wit, hot sex, and a satisfying HEA… unlike Close Enough to Touch. I give the latter a C.