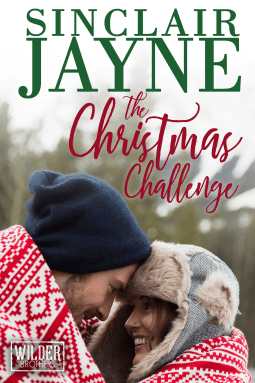 Prodigal daughter, infamous flirt and fiery-haired champion barrel racer Tucker McTavish blazes back home to Marietta with both a secret, and a personal challenge. She will keep a low profile at her twin sister’s Christmas wedding. Which means no whiskey. No kissing. No scandals. No fun. What she needs is a miracle, so it’s too bad when she visits the legendary Miracle Lake to plead for inner strength: a tall, dark, and handsome bad boy is waiting with a challenge of his own.

Extreme sports guide Laird Hunter doesn’t do boring. And he thought he didn’t have secrets. He thrives in carving his own trail through tight and dangerous spots, but when he finds out his entire life has been built on a lie, he heads to Marietta for answers. But when he meets the redhead with the killer smile, laughing eyes and body with more curves than a mountain road, he finds himself asking a whole new set of questions.

Will these two daredevils – with more than a few secrets between them – find the one person from whom they don’t need to hide?

Yeah, so, okay the blurb promises a bad girl meets a guy with Issues and I’m thinking “no booze, kisses or scandals – how bad can she really be?” Maybe she’s a bit impulsive or she got caught in a walk of shame. But that’s not it. Turns out – what she’s done is bad enough that she’s not only shot her professional career in the foot but also her relationship with her twin sister and not in a easy-to-fix way. In a “I tried to steal your now fiancé” way. So far, the saving grace is that she didn’t realize Luke was so serious with Tanner (yes, that’s the sister) when Tucker (honestly, who named them?) made her move.

After dodging coming home to Montana ever since escaping to the rodeo circuit in California, Tucker must now face the music at her sister and Luke’s wedding. Her challenge for herself is that she’s going to be good though – at least for one month. That is until she spots Laird (yep, his mother loves romance novels) out on the ice at the local lake. He’s sex-on-a-stick with a voice that sends thrums of hawtness through Tucker and she can’t resist just a little flirting – it’s like breathing to her and the only way she knows to interact with men. His disinterest initially piques her interest and then spurs her to be sure he at least notices her.

One thing leads to another and before she knows it, she’s confessing all her sins to him because he’s listening – really listening and not judging her which no one has done since she and Luke hooked up years before Luke met and fell in love with Tucker’s sister. What, she asks, if Luke was her one and through her own stupidity she’s now lost her only chance for forever happiness?

The cold shoulder she gets when she finally reaches the family ranch promise that this visit isn’t going to be easy.

Laird is unsure of what to do with Tucker. She’s a bundle of nervous energy, unable to sit or stay still and liable to blurt out anything she’s thinking, especially if she thinks someone is judging her. He’s got a lot of energy as well which he’s used to burning up with extreme sporting. Tucker makes even him antsy. She feels he ought to hang out a counseling shingle since he’s so good at pointing out things to her she’s missed or misinterpreted. Since he’s dealing with some life altering stuff too, he’d probably disagree. He does enjoying “playing” with their sexual attraction and rapport too, their energy zinging off each other like a world class ping-pong game. Laird admires her honesty and willingness to lay it all out without skimping on her faults so her suggestion of them being a mutual support team sounds like a plan.

Tucker will need that as her world gets suckier as she realizes she’s really messed up with her sister and the bedrock of the family ranch will no longer be there for her either. Meanwhile Laird is trying to find his way in his new reality which knocked him sideways when he got dumped into it. Can these two hyper, lonely and lost souls – despite being all super-hot and sexy and the world thinking they’re in total control and badass – help each other and find something more?

Laird can’t believe Tucker doesn’t see or know how big a heart she has or how much she gives – she gave him the gift of inclusion with her family for the holiday events which is something he’s had very little of, really. After the rejection by his birth mother and long term girlfriend, it means a lot to him. But the standing, simmering and unsettled tensions coating the atmosphere boil over a time or three as Tucker and her twin sister deal with their personal issues and the loss of their ranch along with their alcoholic father. Their disagreements aren’t going to be papered over by Tanner’s upcoming wedding.

I knew this was part of a series but until about halfway through, the past characters were in scenes to further this book. At the holiday celebration evening, the full on re-visitation began complete with little sketches of how snuggle happy and “gooey eyed in love” the past main characters are now.

Some of the timing seemed a little “off” too. Up til the midway point, Laird had resisted telling anyone anything about why he came to Marietta even though his temporary job might have eased his way in asking questions about his past – something he’d even considered. Then after a hot but not quite finished make out session with Tucker, suddenly he’s spilling the secrets he’s kept close. Also, I do wonder about the details he mentions about the adoption but this was 30 years ago so maybe things were different and adoptive parents got almost no information. Hmmmm. His loss of and quest for his missing sibling calls to Tucker to mend her relationship with her estranged twin. While Laird is ready to open himself up to a relationship, Tucker isn’t there yet. In fact his declaration scares her silly.

I dunno but after a sizzling start, the story kind of drifts along. Laird gets hard – or semi-hard – and ogles Tucker’s perfect ass. A lot. Of both. He’s ready to change and be a better potential family man and since Tucker is so obviously wonderful with kids, I can tell what’s coming but the sparkle done fizzled out a bit. As the story winds to the end, it’s really getting mired in “series book” wrap up.

One shout out of joy is when Tucker verbally nails a man for attempting to use the P word as an insult to another man. The men are related but still. Anyway, Tucker reams him out, upside and down then crosses her arms and dares him to use the word as an insult. He appropriately backs down.

The beginning of the book was great. Wonderful and zippy with some interesting character challenge set ups. I can’t remember coming across a story with quite the same set up like Tucker has had with her soon-to-be brother-in-law – actually it’s kind of eeuw – and she certainly has her fair share of issues with everyone else in her life. Meanwhile Laird – love the name – muses on his own secrets he needs to discover and the past failure relationships which he thinks have scarred him. Then all this drags on and gets rehashed and jumbled with the wrap up of the previous two books main characters. It got a little dull. I think a mixed grade is called for. B/C

→ Jayne
Previous article: REVIEW: The Ballad Of Elva and Chester by Adrian Archangelo
Next Post: Monday News: Book deals, 2016 notable books, women in television, and ‘sexism sucks for everybody’