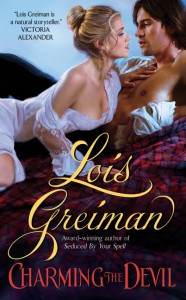 I think of myself as a big fan of the Beauty and the Beast tale, but I can’t help but wonder if we readers are being oversaturated with the retelling of this popular myth. Charming the Devil is the third entry in the Witches of Mayfair trilogy (and given that it is a trilogy, I assume that it is the last book in the trilogy but there are several plot threads that appear to be unresolved at the end).

Faye Nettles (not her real name, but I don’t know that we are ever given her real name) was found somewhere and taken in by Lord and Lady Gallo who own the Lavender House. The Lavender House shelters women who have gifts. Faye’s gift is one of truthtelling and it was sorely abused by someone in her past life. As part of the Lavender House, Faye is called upon to use her gifts to determine whether Rogan McBain was involved in the death of Lord Brendier.

Why the Lavender House is interested in Lord Brendier’s death remains a mystery to me in the end, as do many elements of the story. At one point, it was hinted that Faye is given this task merely so that she can prove to herself she is a woman of great strength and not the mouse she perceives herself to be. Yet, given all the dangers that Faye is put in to gain this knowledge, it seems that Lady Gallo plays very loose with her charges. Motivation of the characters often escaped me in this story.

The story had a very nice gothic feel to it, aided by the timidity of the Faye. She’s very uncertain of Rogan McBain, in part because of his large size. Men have never been kind to Faye and Rogan McBain has the ability to fell her in one blow. For Rogan’s part, he finds “faerie Faye”, as he calls her, fascinating but he’s also a little apprehensive for Rogan’s experience with women hasn’t been very good either. He has a strong protective streak, one that he’s tried to tamp down or eliminate, but to little success. This desire to protect the weaker, or the seemingly weaker sex, has gotten his heart broken and made him leery of permanent attachment to women.

Rogan and Faye are both like wounded birds and easily misunderstand the motives of others and intentionally mislead the other in trying to keep up their appearances. Faye is trying to show that she isn’t tenderhearted or weak (not understanding that the former does not imply the latter). Rogan is torn between wanting to protect Faye and not wanting to fall into another trap.

I found both Rogan and Faye to be very likeable. Rogan is described as so beast like, however, I envisioned pictures of Andrea the Giant. You, however, apparently see a young Gerard Butler. There was a definite disconnect between that vision and the description of Rogan as having “freakish size” or being referred to as a “big freak of a man” and having “timber sized legs”.

Part of my problem with the book is that it seemed very disjointed. There lacked smooth transition between scenes. One minute you would have two individuals talking and then next, one character would be in the backyard garden of a home at midnight. As I said previously, the motivation of the characters eluded me. Why were Faye and Rogan at ton parties? How did they go around blithely interrogating people? Why is Shaleena naked? (you can read the Shaleena naked scene here. I mean, the first scene produced questions that remained unanswered. I kept asking myself what the point was.

I have not read any of the other books in the trilogy and I admit to feeling disadvantaged because of it. Perhaps if I had read the three previous stories, I would have understood the role of the Lavender House and why Shaleena was naked. How people could just turn up in the garden at midnight and why Faye could roam the streets at dawn.

I liked the gothic appeal of it. I liked Faye and Rogan. I just felt like I had only been allowed to read half the story. C