Ah, the peril of the long-running series. I knew in the back of my mind that your ongoing Elantra series consisted of many books but checking Amazon, I see that Cast in Ruin is book 7. This both surprises me and makes me wince. Surprise because I can’t believe it’s been that many books already (I remember when Cast in Shadow first came out!), but wince because at some point, the barrier of entry for new readers becomes too high. 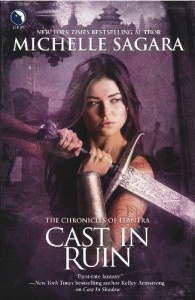 Cast in Ruin continues the fallout from the previous novel, Cast in Chaos, in which a magical storm introduced a new race of people to Elantra. Because this new race is one of small giants, the people of Elantra are understandably wary. Efforts are underway to smooth over relations between the races but unsurprisingly, it’s a slow process.

Kaylin Neya, human Hawk (sort of the equivalent of a police officer) and gifted with magical abilities no one else has or entirely understands, continues her ongoing etiquette lessons with the Dragon Court. Given the nature of her talents, she has to meet the Dragon Emperor sometime but first, she has to become presentable enough so as to avoid being eaten. Further complicating her life are the race of giants whose presence requires attention and a work force already taxed by an involved and long-running investigation into other matters of the city.

But things take a turn for the bizarre when dead women start showing up around the fief the immigrants have made their home. Under other circumstances, people would look towards the newcomers as the source of the problem. That assumption is dismissed, however, by one minor detail. The dead bodies are all of the same exact woman.

It took me an embarrassingly long time to read this novel. It read long and only my love for your works kept me going because had this been any other author, I would have tossed this book aside. Now I realize your books are generally long. I feel like this is a defining trait of your works. Normally, I’m fine with that. Traditional fantasy is my love, after all. But this was the first book of yours where I struggled to finish and in fact having finished it, I still don’t know if the effort to keep going was worth it.

Without going into spoilers, my main issue is that while things happened, I didn’t feel like there was much forward progress in the book. Yes, I realize there was a game-changer, of sorts, introduced in the latter parts of the novel. The problem with this is that I felt like the sole purpose of the book was to introduce this game-changer. Who came into the book. And then the book ended. It’s a bit of a letdown, you know?

It’s true that because of the lead up to the new character’s introduction, we learn more about the dragons. Unfortunately, the information wasn’t imparted in any way I found compelling. How long have we been waiting for Kaylin’s much-anticipated introduction to the Dragon Emperor? Now I realize she isn’t at all ready for that meeting, but how many books has it been? Has she made any forward progress at all? At the rate we’re going, I have doubts as to whether we will even see that meeting within the next 2 books given the assumed location of the next installment.

That said, we do finally get a much-needed conversation between Kaylin and Severn. Does it lead anywhere or change anything? No, not especially. While I liked seeing what Kaylin actually thought of Nightshade, that subplot is moving about as fast as the built-up meeting to the Dragon Emperor. Perhaps even slower. I’m not particularly frustrated by the lack of progress but 1) by this point, I don’t expect any on that front anymore and 2) I was more irritated by other things.

Long-running series are difficult to keep interesting. I say this as a reader who’s followed many (Kelley Armstrong’s Otherworld, George R.R. Martin’s A Song of Ice and Fire). What keeps me invested is change. While some readers would say that the new character in this book did introduce change to the series, I would argue that while it did introduce change to the world, it didn’t introduce an immediately obvious change to Kaylin. Sure, she gets a new roommate but how does this affect her character arc? After all, for all intents and purposes, the new character is essentially an immortal version of Kaylin and to be blunt, one of that character type per novel is enough. I feel like the proportion of scale was lost.

While it’s true Kaylin is not the same character we first met in Cast in Shadow, I’m not entirely convinced she’s made as much character progression as you’d expect for someone who’s gone through 7 books. She’s striking me as static at the moment. Does that mean massive character evolution couldn’t happen in the next novel? No, of course not but I’m not seeing it and it’s making my interest in this series flag. I honestly don’t know how much more of this non-progress I can take. And new readers beware: this is a not a good entry point into the series. We’ve long since passed that point, unfortunately. C

→ Jia
Previous article: REVIEW: Wishes and Stitches by Rachel Herron
Next Post: REVIEW: All They Need by Sarah Mayberry