Longtime readers of DA know that I’m a dedicated fan of yours. If you publish a novel, it’s almost guaranteed that I’ll read it. I’ve followed your Elantra novels about Kaylin Neva since the very beginning. I can’t believe we’re already up to book 8! Time flies. Well, for us, anyway. The timeline is still pretty decompressed within the books themselves. 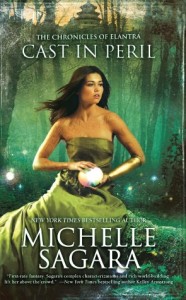 Cast in Peril continues the story of Kaylin Neva, our reluctant heroine gifted with magical powers no one completely understands and whose body is marked with written tattoos most people have long since forgotten how to decipher. The Elantra series revolves around the cases she takes on in her role as a law enforcement official/investigator while also tackling the ramifications of having those very same magical abilities. For the past several novels, Kaylin has been navigate the complicated politics that comes with living in a world filled with different races, all of whom live under the auspices of a dragon emperor.

Since the events of the previous novel, Kaylin has been adjusting. She has a new roommate, the female dragon Bellusdeo. She’s been taking care of a mysterious egg. Things could be better but they’re not all bad. Then someone blows up her apartment in an assassination attempt upon Bellusdeo’s life.

You’d think this distinct possibility would have occurred to someone. Bellusdeo is the only female dragon in the world. Basically, the future of the race depends on her. If she dies, the number of dragons in the world remains as it is. The fact that she was allowed to room with Kaylin is something that doesn’t sit well with me because it just doesn’t make sense. Unless, of course, you view it through the lens that Bellusdeo is a special chosen one in the same way that Kaylin is a special chosen one, and as such, she gets to do whatever she wants. As you can guess, I’m not keen on Bellusdeo’s character, mostly because she’s all of the traits I dislike in Kaylin amplified.

At any rate, Kaylin and Bellusdeo escape the attack unscathed but just barely. This is mostly due to the intervention of the mysterious egg, which chooses that moment to hatch. What comes out of the shell? Good question. It looks like a small glass dragon. That’s not what it is at all, of course, and soon Kaylin finds herself in possession of a magical familiar many people would destroy worlds to obtain.

While this is all going on, Kaylin has also been looking into a series of disappearances in the fiefs. The investigation leads to some unfortunate revelations, which tie into a side assignment Kaylin must take on. You see, in exchange for some information needed for an ongoing investigation, Kaylin must travel with the Barrani to West March. Given that the Barrani are this world’s equivalent of the Fae, you can guess how well this is going to go.

One thing I’ve always liked about the Elantra series is that the books generally have self-contained story arcs. True, certain plotlines and character arcs carry from one book to the next. Occasionally one book will explore the fallout of events that happen in the previous one. I do think we’ve long passed the point where new readers can jump into the series but overall, the books never individually feel incomplete.

That changes with Cast in Peril. Apparently, this novel and the one to follow, Cast in Sorrow, were meant to be one novel but had to be split in half due to length. Having read the novels you write under the Michelle West, I’m used to this. Other readers, however, might not be.

But that’s not why I have mixed feelings about it. While I do believe the split was necessary, it had the effect of making this book feel incomplete. Yes, in a sense, that’s certainly true considering that it’s really the first part of a novel, but it makes for a rather unsatisfying reading experience. I personally found the first half of Cast in Peril to be slow. Yes, things happened. Yes, there was a huge explosion that had major repercussions. But despite all that, I felt like it was a lot of flash and show for not a whole lot of forward movement.

This goes to the heart of my main complaint with the Elantra books as of late. It began bothering me in the previous novel, Cast in Ruin, and it only got stronger with this installment. We are eight books into the series but not nearly as much time has passed within the series’s timeline. If I estimate correctly, I think it’s less than a year. And while I don’t mind decompressed timelines, I do think there’s such a thing as taking it too far. It makes the overall narrative seem like it’s plodding forward. I don’t think a narrative should ever plod. It’s also begun to stretch believability that all these monumental, world-changing events have been happening within such a short time span.

With Cast in Peril, I was promised a trip to West March. It’s the reason why Kaylin had to take a leave of absence from the Hawks. It’s the reason why Teela has to accompany her. It’s a Big Deal that the Consort is coming along. And even though we eventually get an interesting journey there, it’s still a letdown that we never arrive. In fact, it’s frustrating. It’s slow burn build up to something that never happens because the books end. I expect this sort of pacing in a big fat epic fantasy doorstopper. I did not expect it here.

As for the eternal Severn versus Nightshade debate, readers on both sides of the divide will be pleased to know that Kaylin has significant interactions with both in this novel. I’m still on Team Severn all the way. My mind has not changed and I doubt it was ever will. The power dynamic between Kaylin and Nightshade makes me uncomfortable in the context of a romantic relationship and considering some of the revelations that happen in this novel, I don’t think I’d ever be okay with the idea of them being a romantic couple. In some ways, I think there was more progress on the Kaylin and Severn front with them explicitly addressing some things between them but I don’t think all hope is lost for those on Team Nightshade. (Hence, why I’m still so uneasy about this aspect of the novels.)

There are some interesting displays of magic in this book. I enjoyed those scenes quite a bit but I can see how those readers from not as strong a fantasy background might find them a bit impenetrable and abstract. Despite that, however, I was most interested in the familiar and curious to see what role it’ll play in future books. I realize it’s yet another sign of Kaylin being the special chosen one but people who find that trope irritating probably wouldn’t be reading this series in the first place.

Overall, I don’t regret reading this novel but I’m feeling increasingly disenchanted with the series. For all the events that keep happening, it just doesn’t feel like there’s been any forward movement at all. Yes, I realize not much time has passed “in-world” but considering how catastrophic some of the events of past novels were, there should be more advancement, particularly on a characterization level. I’m still hanging on for Cast in Sorrow, but I’m not eagerly anticipating it either. I fear series fatigue has overcome me at last. C