I was wary about the plot of your short eBook, Can’t Buy Me Love. Meg Parson, executive assistant to gorgeous ruthless multi-millionaire CEO Cole Jackson, has longed for her employer since the day he hired her.  She has forced herself to ignore her feelings for him because 1) he’s a player and 2) sleeping with him could ruin her professional reputation. Cole’s had the hots for Meg for over a year now and, when the two have to head to Costa Rica together to close a business deal Cole’s jonesed for forever, he decides he’s ready to acquire both the new company and his sexy assistant. 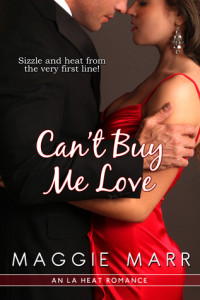 I’m not wild about boning the boss tales. Yes, I know many women have indeed slept with their superiors and that, shockingly, many felt it helped them get promoted.  Still, such stories don’t call to me—when I read them I get distracted by a blinking neon sign in my brain: Bad Idea. Very Bad Idea.

But, I thought I’d give your book a whirl and see if you could recount that trope in a way that didn’t distress me. And, I have to say, you did. I was fine with the way Meg and Cole negotiated their professional relationship. I wasn’t crazy, however, about Meg or Cole nor did I especially enjoy their love story. The two went from colleagues ignoring their desire for each other to lovers so fast I almost got motion sickness. And, they act like such morons in the last chapters of the book—both suffer from excessive TSTL syndrome—I ended up not giving a damn whether they made up or not.

At the beginning of the book, the readers are introduced to Cole and Meg through the way the two view each other. Meg has been Cole’s assistant for three years, but has spent the past six months in an office down the hall, working on that BIG deal. Cole has missed seeing her and now that she’s in his office, he’s awash in lust.

Meg Parson’s voice was brighter and lighter than the curves of her body would suggest. She shifted her weight and her hip teased forward against her suit skirt. The outline of bone against taut fabric taunted Cole with hints of lace panties. In a careless moment his gaze roamed over her legs, caressed her skirt, and brushed over the outline of her breasts. Hunger for Meg clutched his belly and twisted hard.

Meg, too, can barely think about anything what a hunk her boss is.

Even with his tie pulled loose he appeared stunningly sexy….

The deal Meg has been working on is suddenly at risk and there’s nothing for it but for Cole and Meg to take his private plane—“one of a handful of custom-made Boeings in the world”—fly down to Costa Rica, and woo the elderly couple who is balking at selling their company, TBC, to Comnet, Cole’s huge multimedia company.

Once the two are in Costa Rica, living the life of the fabulously wealthy, Cole decides it’s time to bed Meg. She, despite her deep conviction boinking her boss will both demean her professionally and probably break her heart, can’t resist the juggernaut of sexy that is Cole Jackson. He gets her alone, and tells her her life

“Is about to get more interesting.” His lips pressed hot against the back of her neck. Her knees weakened and she fought to stay vertical. His arm slid around her waist and held her firmly as his lips explored her neck. She needed to step away from his touch—to pretend that she had never felt Cole’s lips on her neck and his hands on her waist. But her body betrayed her, and her hips pressed backward, arching toward him and against his hardness. This was madness. Absolute and complete….His finger stopped on her lips and pressed ever so gently as if asking permission for her kiss. Meg parted her mouth, her tongue slipped to her lips brushing his fingertip as he gently traced her mouth. She wanted him. She wanted Cole more than her promotion, more than safety, more than security, even more than all the compatibility requirements on her list. “We…we…can’t—” she breathed out heavily. He was too much. More than she could handle, more than she could take— “Oh, yes we can.” His arms circled her and pulled her forward. His lips were on hers with fierceness, a need-a possession of her.

That kiss leads to lots of very hot sex and by the time the two have convinced the sweet elderly couple to sell, Cole and Meg are a couple. They return to the States where Meg essentially moves into Cole’s Bel Air mansion and the two conduct a secret affair: Meg doesn’t want anyone to know because her colleagues might think less of her.

People would forget her stellar education or that she worked tirelessly for three years to get her promotion or brokered an amazing deal between Comnet and TBC. Her reputation would forever be tinged with the implication that her promotion was based merely on her abilities in bed.

There’s lots more hot sex and then, a huge and completely unnecessary misunderstanding. Cole and Meg, who both have “issues” from their pasts, act like idiots. Heartbreak ensues. All problems are resolved quickly—the book’s less than 150 pages.

The brevity of the book is, I think, part of its problem.

All the characters are stock characters—the arrogant, makes the big bucks, sex god boss, the gorgeous assistant whose bodacious body belies a brilliant mind, the lovely elderly couple who are living proof of  LASTING LOVE.  There’s even a sassy BFF for Meg, although given that Prim, Meg’s friend, works for Comnet’s biggest competition, one would think the two might be a little savvier about email. Just saying.

Can’t Buy Me Love isn’t bad; it’s just too short and too trite to really be good. But, the sex scenes are steamy and, surprisingly, the “I banged my boss” trope is handled well. I suspect were it a longer book, it would have ended up somewhere in B territory. As it stands, however, it’s an utterly forgettable, wile away a few hours on a plane, C. Also, the copy I had, which, granted, was a release, was rife with errors. Words ran together, lines ended randomly, spelling mistakes made sentences unintentionally hilarious—I hope this is just the case for the review copy; in a finished copy, readers deserve more care for their money.

→ Dabney
Previous article: Is There A Right Way to Read Rape?
Next Post: Dear Author Recommends for May 2012