I’ve really loved some of your past Superromances particularly because I think you do such a great job of creating authentic, believable people in your stories. While the prose was still strong, I felt that the pacing was a bit slow, the ending was a bit too dramatic and the characters weren’t quite as vivid. 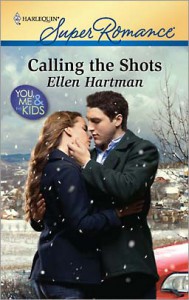 Clare Sampson has had trouble allowing anyone to create permanent bonds with her. She takes this to extremes by moving her and her son all over the country taking on new computer consulting jobs. This might not have presented a problem but for her son, Tim, a 13 year old tired of their nomadic existence. He doesn’t want to make new friends, attend a new school, join new clubs each and every year. The fact that Clare never realized this seems a bit odd and her surprise at Tim’s unhappiness seems almost disingenuous or, at the very least, myopic. Clare’s latest stop is upstate New York and Tim has joined the youth hockey team even though he has never played hockey before.

Allie is the 13 year old daughter of Bryan James, a former high school hockey star who went to college on a hockey scholarship and subsequently ruined his future one drunken night that resulted in a knee injury. His ex wife got a choice gig as a celebrity hairstylist for a reality tv show in California and Bryan is single parenting for the first time in his life. It’s not going well. His daughter Allie is getting into fights at school and refusing to talk to him.

Neither Clare or Bryan came off as insightful parents (or the ex wife for that matter) yet Allie and Tim were presented as fairly well adjusted minus a few slamming of doors and fighting. Allie, in particular, seemed a bit paint by numbers given that Bryan was never around before her mom up and left and now her mom has up and left. For a book that centered around Clare and Bryan’s relationships with their kids, I just felt that Allie and Tim were underdrawn even if their conflicts, emotions, rebellions seemed reasonable for their age.

Allie and Tim are both on the youth hockey team in upstate New York and engage in fisticuffs at the rink. If they don’t participate in mediation, Allie will get thrown off the team and then the team won’t make State. Clare doesn’t like this but when she is confronted with the reality that everyone in the town will hate her son and her if Allie is kicked off, she quickly assents to mediation. The mediation involves the kids engaging in six weeks of group activity with their parents which places Clare and Bryan in close proximity; not to mention their meetings at the hockey arena.

I wondered if there wasn’t too much going on in this book. The teenage anxiety could have been sufficient for one book but through in two teenagers suffering from identity crisis and abandonment, throw in Clare’s inability to allow someone else into her life, Bryan’s unexplained failed marriage, and the nearly non existent ex wife, I felt that each issue only received a cursory look.

Then there the issues that weren’t addressed.   Bryan sits down and works out his finances at one point as his problems with Allie are endangering his job.   Clare, however, is only supposed to be in the town for a little under one year.   There is no mention as to whether there would be any work for her after this contract is over.   Even if she wanted to settle down, would she financially be able to do so?   Then there was the burgeoning teen romance between Allie and Tim.   How would that be affected by Clare and Bryan’s relationship?   How would Allie respond to Clare’s insertion into their lives when Allie’s mother had recently abandoned her?

Clare played the prickly closed role v. Bryan’s more open, willing to take chances, role. The romance doesn’t really pick up toward the latter half of the book. What results in the resolution of Clare’s conflict – her unwillingness to open up and make herself emotionally vulnerable by becoming attached to something (a town) or someone (Bryan) – really frustrated me and I felt that it was a rushed ending which wasn’t half as thoughtful as most of the book. C

→ Jane
Previous article: First Page: Young Adult
Next Post: Dear Jane: What Is the Best Way to Read PDFs on a 6 Inch Screen