Review: By the Hour by Roni Loren

I picked up By the Hour because I enjoyed your first Pleasure Principle book, Off the Clock. I was surprised that Elle McCray, the purported villainess and rival of the heroine, Marin, in Off the Clock was going to be the main heroine, but I rolled with it. 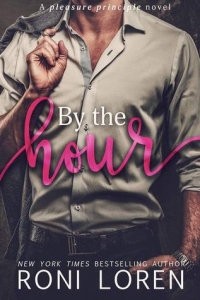 I love the idea behind these books. For anyone who hasn’t read them, basically there is a rehabilitation/addiction/therapeutic facility called The Grove. They deal with a number of issues including those of a sexual nature.

The hero, Lane Cannon, is actually a professional sex surrogate who works in the sex therapy wing. Elle is the lead doctor in charge of dealing with patients seeking help for addiction. The two know each other but aren’t on friendly terms.

The relationship between the pair begins when Lane tries to kindly engage Elle, our heroine, at a party for Marin and her fiance (hero from book 1). Elle is the definition of Ice Queen but she doesn’t quite fit the stereotype. She’s extremely closed off and has good reason to be (see ex-husband and crazy relationship with her family), but she’s aware of those issues.

It could be REALLY easy for readers to hate Elle, even within the first 30-40 pages of the book. Every line she shouldn’t cross, she does such as calling Lane a hooker, actually trying to pay him for sex, refusing to publicly acknowledge their relationship, etc. But I don’t think the reader can hate Elle anymore than she hates herself and what kind of cards life has dealt her.

Lane has equal reason to be closed off, but he presents an easy going and comfortable presence to those who know him. It’s part of what makes him a successful sex surrogate. He has aspirations of becoming a licensed clinical social worker, but his hidden anger and pride could get in the way. For example, even though he is failing his classes, he refuses to be tested for dyslexia or request academic accommodations. He worked as an escort and still has anger about the idea of being used by anyone or anyone who would refuse to acknowledge him as a working professional.

Because Elle definitely fails on the acknowledgement front, we get A LOT hate sex initially.

It’s known that Lane goes to a kink club and has tendencies towards women whom might be more submissive, but he doesn’t expect that from Elle. Neither does he fit what would be a stereotypical BDSM romance Dom. The characters do establish sexual likes, dislikes, kinks, preferences, etc. but neither lead is fully defined by his or her sexuality. At the same time, this is an extremely sexual book so physical intimacy does play an enormous part in bringing the hero and heroine together. The physical and the mental are deftly woven into a number of actions between Elle and Lane.

There are a lot of nods to romance tropes in one book: Lane is a former escort; Elle has Lane pose as her fiance at a family wedding; Elle as a successful doctor juxtaposed against the stigma around Lane’s work as a sex surrogate creates a class issue; Elle, the older heroine, is paired with a younger hero. All these tropilicious events culminate in an understanding.

Elle screws up a lot and many of her actions could be viewed as distasteful. Elle’s redemption happens through Lane’s perspective and Lane’s point of view. Because he does not give up, neither do I. However, I’m not sure this method of redeeming a character’s negative traits is entirely successful.

The novel is well-written and engaging. I did find Elle’s characterization felt stagnant in terms of her progression. She didn’t progress unless Lane came in with some compassion and forgiveness. He doesn’t heal her but he absolutely doesn’t hinder her growth either. It’s like the more Elle interacts with Lane, the more redemptive she gets. I found the conclusion and the HEA satisfying, but I will admit to you that as a reader I have a hard time with the setup of a prior antagonist turning into a hero, mostly in the realm of contemporary romance. It’s easy for me to accept the idea of an antagonist becoming a hero within a historical, paranormal or almost any other subgenre of romance except for contemporary. Perhaps it’s because as a reader, contemporary is too close to reality and my reading view is more black/white than shades of gray.

Readers will be entertained, but they, like me, might have to be dragged kicking a bit along the way. I will definitely revisit The Grove, but probably won’t end up best friends with Elle.