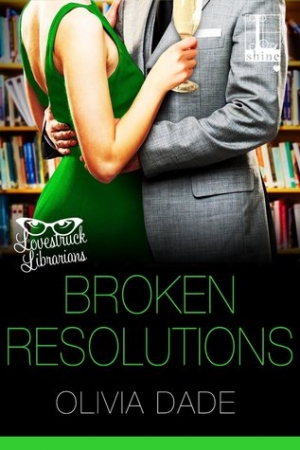 I like books about librarians and the set up for Broken Resolutions looked fun and cute. Shy librarian, Penny Callahan, takes over New Year’s Eve singles event at the library at the last minute. Reclusive famous author, Jack Williamson, is dragged along by his widowed mother, Brenda. Librarian and author make a love connection. (Brenda makes a love connection with another attendee because older people need love too.) It had all the potential for a lighthearted, flirty read.  And, bits of it were – particularly those featuring the feisty Brenda, who is not shy about her desire to jump back on the sex train after being single and sexless since the death of her husband a decade earlier. Watching Jack alternatively cringe at his mother ‘s frankness and stare daggers at Carl, the distinguished gentleman Brenda has her eye on, was a lot of fun.

I also liked Penny’s dynamic with fellow librarian Angie, whose brainchild the singles event was. Angie sounds like my kind of librarian actually – she develops unique displays and activities and has increased library patronage significantly. (Unfortunately, Angie’s efforts have drawn complaints from the Board and she will have to rein things in or risk losing her job in the next book in the series, due out next January.)

Where things fell a little flat for me was in the characterisation of one of the other library patrons, known only as “Skintight Dress”, which I felt was slut shamey. Given that both Penny and Jack thought about the woman in the same terms, I felt it was an issue with the narrative and not just Jack, but it didn’t make me feel kindly disposed toward Jack in particular, who thought in terms such as:

Even Skintight Dress, whose outfit appeared to shrink still further each hour they spent in the library. By the end of the evening, he fully expected the woman to be wearing nothing but a thong and a set of pasties.

She wasn’t flaunting herself. She didn’t move like a woman aware of her body and how it could entice men. He’d seen no posing. No affectation. Nothing but innocent beauty and sensuality.

as if there’s something wrong with a woman who is aware of her body and how it can be desirable. I think the characterisation was supposed to be broad for humorous effect, but unlike “Cologne Guy” or “Red Tie”, the name given to this woman was unfairly gendered I thought and the humour fell flat here for me.

The other problem with the book was that most of the action took place over the course of New Year’s Eve and the early hours of the next morning. Yet, by the end of the story, both were pledging undying love and that was just too fast for me. It made me question both characters’ judgement. I’d have found it more believable if they were agreeing to start a relationship and things ended on a HFN.

Jack, because he is a famous author with a young daughter (he is divorced), is very wary of trusting new people – he has been burnt before by the paparazzi and does not want his daughter’s life disrupted by media intrusion. He makes the decision to hold off telling Penny that he is not an accountant but is actually “John Williamson”, one of Penny’s favourite authors and this forms the main conflict of the story. While I didn’t love Jack’s decision, I thought Penny’s reaction to the news was a little over the top considering, for all her priding herself on her honesty, she had lied to Jack twice for very selfish reasons the night they met.

While I liked parts of the book, the romance felt rushed and unbelievable to me and I didn’t warm to Jack all that much.

Then again, what do I know? There was a part of the book which I was seriously rolling my eyes over because I thought the text was overwrought – and it turned out to be a direct quote from Jane Eyre. Perhaps I just can’t appreciate a classic.

→ Kaetrin
Previous article: Friday News: The Video Edition
Next Post: REVIEW: Round Midnight (aka A Midnight Clear) by Emma Barry and Genevieve Turner