[themify_box style=”blue rounded shadow”]Marthine thinks you shouldn’t raise children on Oz, Narnia, and Shakespeare unless you are prepared for a love of magic and mystery to root deeply in your offspring. Marthine devoured sci-fi and fantasy as a kid, grew out of it for a while, and has grown back into it. In college, she called it “magical realism,” and now she calls it fun. Find her on Twitter at @MSatris and online at marthinesatris.com. When not writing, she edits for a literary press and teaches English to college freshmen[/themify_box] 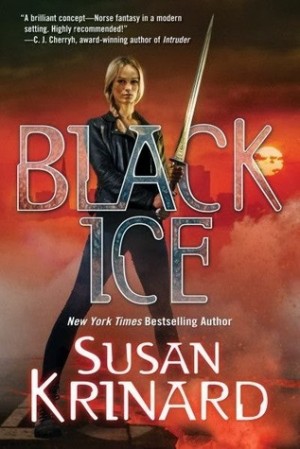 When I finished Mist, the first book in your Midgard series, I was left with a lot of unanswered questions about the world you’d built and the characters’ relationships to each other. I hoped that this next book in the series might put some of those to bed, but in fact, everything has just gotten more chaotic, confusing, and packed with action that seems to exist just for its own sake.  It’s important to note that I read an advance review copy, and I am sure much has been tightened up between this version and the published version, but still – I felt let down by Black Ice. I keep getting lured in by your beautiful writing, including the incredible descriptions of what the Nordic gods’ magic looks like, but the snarled up plotlines and addition of at least ten new characters had my head thumping just trying to keep straight who knew what and who was on whose side.

Black Ice opens just days after Mist ends, and covers just a few weeks but a lot of action. The battle between Mist – daughter of the fertility goddess Freya and a frost giant (Jotunar) lover — and Loki, the god of mischief, over the fate of the mortal world is heating up even as San Francisco gets colder and colder, sheathed in Nordic ice. We begin Black Ice in the perspective of Anna, a brand new character with connections to Mist’s past, and she’s accompanied by a mysterious sentient bird named Orn that both sides covet. Anna has been drawn to San Francisco by Mist’s unconscious glamor, which is drawing people with special abilities and deep connections to the Nordic myths together in San Francisco. I was very interested in this opening in Anna’s point of view, wondering if it meant we’d be watching the war between the gods over the future of our world from a completely new perspective. But we spend most of the story in the perspectives of the three main characters: Loki, Dainn, and Mist. The completely exhausted, yet always beautiful and strong, Valkyrie Mist gathers her troops while also trying to figure out what the Hel she’s fighting for. She and Dainn, the oath-breaking elf and shape-shifter, are still working together on Freya’s behalf, trying to keep Loki from turning the world into his playground. But the game is getting more and more complicated, and Mist still isn’t sure she can trust her own mother – and Dainn knows she can’t, since Freya is still intent on turning Mist’s body into a vessel for her to use on earth.

The primary driving force of this second book in the series is Loki and Mist’s race to find and control Odin’s treasures, which were entrusted to the Valkyries and other trusted followers centuries ago. A wonderful new complication in this race is Loki’s young son, Danny, whose ability to control magical forces is already so strong that even Loki is a bit afraid of what he can do. Danny seems to be autistic, mute and unresponsive to most outside stimuli, but when he meets Dainn, his father’s former lover, he comes to life. And Dainn is drawn deeply to protect this little boy, at any cost, as is Mist, to their mutual confusion. Danny, Dainn, and Mist band together to find one of Loki’s other children, the eight-legged horse Sleipnir, who is also one of Odin’s treasures, which, unfortunately, leads to a giant tangent in a far off, unknown plain right at the climax of the battle in San Francisco. This splits the book into multiple alternating chapters following lots of different characters in their various battles for a solid third of the novel, which got very, very confusing. While it may be that final revisions ironed out some of the confusing elements of this book, the slackness of this storytelling choice really works against the reader’s experience.

Mist’s Valkyrie sisters are coming to her aid after centuries of whiling away their nearly immortal lives in far corners of the earth, and Loki continues to lure mortal criminals and some immortal schemers to his side. He also controls the powerful and intimidating frost giants – but we learn from one of them early on that they may have been coerced. Mist catches a frost giant breaking into her loft and injures him, only to have him confess to Dainn as he dies that he is Mist’s father. While this might seem to lead us in the direction of Mist’s personal history, the revelation of Mist being responsible for her own father’s death is just one more puzzle piece thrown into the box of intrigue and complication that is this novel, along with Anna’s history, her bird’s real identity, and the many threads of plot and motivation that are left unresolved.

While I am disappointed in the substitution of tumult for a clear story, I appreciate that in the world of the Migard series there is a lot of room for different kinds of relationships, and for the complexities of lust and love that test even immortals. And Ms. Krinard, you sure know how to write about the heat of attraction so that it makes the page simmer, I will happily concede. There is a seriously hot scene of Loki and various combinations of his young admirers falling into bed, though Mist gets short shrift on the sex front. She and Dainn make eyes at each other, but their appreciation for each other is always complicated by Dainn’s self-hatred and his secret oaths to others, as well as by Mist’s need to save everyone, by herself, all the time.

One of the other strengths of your book is the descriptions of the magic and the strangeness of an icy San Francisco — a weather shift that fazes the residents much more than the simultaneous supernatural earthquakes, of course! For instance, when Loki is building a bridge to the dimension where the frost giants live, the scene (as it read in the advanced review copy) is perfectly realized:

He opened his left hand, gathering into it the finest crystals of ice from the air and the earth surrounding the bridge. He closed his fist, and when he opened his fingers a tiny crystalline spider crouched on his palm, its legs like needles and its faceted body reflecting the moonlight like a diamond.

Loki tossed it into the air, and it began to spin a webwork of ice strands as fine as sewing thread, firmly anchored to the trusses and deck of the bridge. Loki kept the web stable as the spider did its work, spreading his hands wide and chanting the Runes: Day, Water, the Wagon, each stave stretched until it, too, was no more than the width of a single hair. He tossed the attenuated staves toward the spider, who wove them into the filaments of ice, blocking the road and forming a structure that could have stopped an army of bulldozers in its tracks.

Your language is so lively, and the vision is so specific and real! And Loki is nothing but delicious fun – I love reading the scenes from his perspective. He takes such joy in spreading chaos, and he pines so much for Dainn I almost pity him… until he uses his wiles to force Dainn to submit to his lust, and then I just hate him again.

Despite these wonderful elements and rich characters, I have to disappointedly say that this book  could not have been more of a mess in terms of plot, in the version I read. Dainn says something that seemed very revealing  to me in the first third of the book, shortly after he has promised Mist to not go off on his own, since his control over the beast within is severely depleted:

And once again Dainn faced a choice. He could pursue the Jotunn and thus the bird, or report to Mist.

Guess what he does? Disregards his promises and sets off on his own, of course, just as he does time and time again in this series. In order to create plot movement and mystery, the same mistakes are made over and over again. Promises are made, only to be broken; no-one, apparently, has wards that work, since Dainn and Mist are always building them, only to have them effortlessly broken every single time Loki or his minions draw near; herbs Dainn takes to control his shape-shifting work only until it’s convenient for the plot that they don’t; and the agreements to leave each other’s territories alone are ignored as soon as they are made.

Additionally, everyone – reader and characters – are in a constant state of confusion, since Loki and Freya have information they aren’t sharing, and minor characters keep creepily popping up to say dark and mysterious things, or offer help, only to vanish offstage again. Mist has a mysterious wrist tattoo that burns when she works magic, and no-one knows why, and when the book ends, we are in the mind of Orn the raven, who seems to have way more information about what’s really at stake in this magical battle than even Freya or Loki has, but the reader isn’t told why, how, or to what purpose this raven is involved with the whole enterprise.

I felt very frustrated and whipped around, and we never spend enough time with Mist in this book to truly understand or empathize with her. She remains a perfect woman, seen mostly from everyone else’s perspective. After Mist’s father’s identity is revealed, nothing is done with her responsibility for his death for one hundred pages, if not more, because there’s Danny and the battle and everything else to deal with. I think this is a matter of too many strands forming a knot instead of a braid in the book.

Simply because so many hints were dropped in book two and so many loose ends laid out that weren’t tied up, I will likely read the final novel in hopes that the burning tattoo, the appearance of Mist’s father, the crazy mind of Orn the raven, and the mysterious lawyer who occasionally shows up to do martial arts-style combat with Mist will all finally come together and relate to the main battle at hand. I also hope that the magic and skill of you and your editors have carved a great book out of the storm of action and characters that I encountered in the review version of Black Ice.