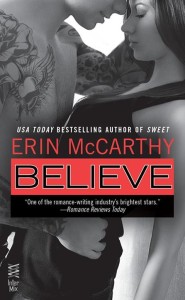 Although I’m not an ardent fan of Erin McCarthy’s True Believers books, I did like the first two novels enough to keep reading. The endings of True and Sweet didn’t quite leave me satisfied but the rest of them worked well enough to hold my interest. With Believe, I was ultimately more satisfied with the final outcome of the relationship but the issues touched upon in the process left me with severe reservations.

Robin is a friend of Rory and Jessica, the heroines of the previous books in the series. While she loves art, she opted to be practical and majored in graphic design. Painting may be a passion but it’s not stable work. All was going well until the previous summer. Her best friend, Kylie, went home for the summer and something happened between Robin and Kylie’s boyfriend, Nathan. Wracked with guilt, Robin’s withdrawn from her friends and no longer the vivacious party girl she once was.

Then she meets Phoenix, the cousin of Tyler and Riley (the heroes from the previous books in the series). Phoenix has just gotten out of jail after serving time for nearly killing his mother’s abusive and violent ex-boyfriend. He was diagnosed with intermittent explosive disorder when he was young but it’s largely gone untreated because his mother used to take the medication he was supposed to take for it and in turn sold it for heroin. Yes, his mother was an addict much like Tyler’s and Riley’s.

The thing I really liked about Phoenix is while he is the typical NA bad boy in many ways — tattoos everywhere, tattoo artist, “dangerous” (served time in jail, has a bad temper, even though his is the result of a disorder) — he’s surprising in others. Because of his mother, he’s as straight edge as they come: no alcohol, no cigarettes, no drugs. He doesn’t judge other people if they choose to partake but it’s not something that interests him. I think it’s this quality I like because it helps give him insight to Robin’s binge drinking problem — she falls back to alcohol when she cannot cope.

But even with this dynamic, I was deeply perturbed by the presentation of what happened between Robin and Nathan. The narrative presents it a mistake arising from too much alcohol. Robin drank too much at one party and when the guy she’d been flirting with hooked up with someone else, Nathan took her home. Except she woke up the next morning naked in his bed. The problem? She has no real recollection of what happened the night before. She blacked out because she’d drunk too much alcohol.

The novel presents this as sex. Robin castigates herself as a slut who hurt her best friend by sleeping with Kylie’s boyfriend. I’m not even going to address the slut shaming because that would imply what happened was consensual sex. It wasn’t. Robin blacked out. She was practically unconscious. You can’t give consent under those circumstances! When I realized what had actually happened and how the narrative was presenting it, I was reminded of a series of sexual assault ads run in Edmonton.

So as you can imagine, I was seriously bothered that it was framed as cheating. No. Robin was sexually assaulted. Nathan is not a cheating asshole. He’s a rapist. He knew what he was doing. What do you call a guy who takes advantage of a girl who’s practically unconscious? So I really disliked that because Robin wasn’t “hurt” — she didn’t wake up with bruises, scratches or other physical injuries — that meant it wasn’t rape. That’s a misconception already deeply embedded in our culture. it doesn’t need further reinforcing.

The only person who even comes close to acknowledging the problem is Phoenix. He lets it go because Robin herself doesn’t acknowledge it as rape but later it becomes apparent through his actions he does consider it assault even though he never says it aloud. But he’s the only one. I cannot even begin to fully articulate how screwed up that is. Remember the reason why Phoenix went to jail. It takes walking in on a woman being raped to realize the various ways it can and does happen? Really?

It’s a shame because I really liked the relationship between Robin and Phoenix. I liked how they healed each other and how they made each other better versions of themselves. That’s what I like to think love should do. But the way the sexual assault was handled and presented really detracted from that.

I liked that binge drinking, particularly on college campuses, was addressed. Robin had a legitimate problem. What I didn’t like was that her decision to swear off alcohol and go clean was the sexual assault. Because in framing what happened as drunken sex, Robin blamed herself. “If she hadn’t been drunk, it would never had happened.” No, it would never have happened if Nathan had just taken her home and left her alone like he was supposed to. He is the one to blame, not Robin. This is victim blaming.

This was a very frustrating read for me. I enjoyed the relationship between Robin and Phoenix. This was also the first book in the True Believers series where I found the HEA/HFN for the couple to be satisfying. I liked that Robin’s sudden shift from party girl to boho artist let her become the person she was meant to be. If I were judging the book on those aspects, I probably would have given this as a B. Too bad those good things were overshadowed by a narrative that upholds the most insidious beliefs of rape culture. The next book in the series features Kylie, Nathan’s ex-girlfriend. Based on the excerpt, I just don’t know if I can read it if they’re going to continue to treat what happened between Nathan and Robin as cheating and consensual sex. And judging by the way Kylie treats Robin when the inevitable happens in Believe and she finds out, I fear that is likely. Maybe someone else can read it and tell me. C