REVIEW: Before You Break by Christina Lee 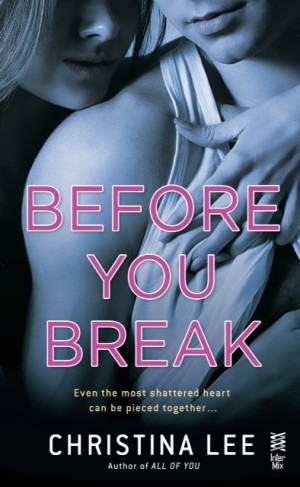 Last year I read and enjoyed your debut novel, All of You. Enough so that I looked forward to your next book. Before You Break is about Ella, the best friend of Avery, the heroine of All of You.

Ella’s younger brother committed suicide when she was in high school. This left a mark on her entire family. They worked through their grief and moved on with their lives, but it influenced Ella in many ways. She’s studying to be a psychologist. She works at a suicide prevention hotline.

Unfortunately, some of these things are less ideal. She’s dating a guy because of a tenuous connection to her dead brother. Hardly a reason to stick with someone under the best of circumstances and even less so when the guy is an asshole who’s cheating on you. But Ella’s boyfriend is part of a frat and through that frat, she meets Quinn.

Quinn is the university’s star catcher. He’s also not living his own life. Feeling guilty for an accident that happened when he was in high school, he’s living out the life that should have belonged to his best friend. Quinn loves working on cars, not playing baseball. He wants to open a garage, not become a business major.

Given the recent conversation about readers’ hard lines, I want to start off by assuaging any fears. There’s no cheating in this book. Ella ends things with her cheating boyfriend before starting anything with Quinn. But she didn’t end things because of Quinn (and in fact, doing so would have made me doubt the long-term viability of their relationship); rather, meeting Quinn made her realize some deficiencies in her prior relationship.

Before You Break is a novel that plays with dual identities. Ella and Quinn know each other through the frat house and Ella’s ex. They also know each other as Gabby and Daniel, the suicide prevention hotline operator and the guy who calls in when he questions why he’s still alive. Neither knows about the other relationship. Ella doesn’t know Quinn is Daniel, and Quinn doesn’t know Ella is Gabby.

This is clever and all, but I’m not convinced it adds anything to the narrative. I understand why the device is used. Quinn isn’t going to unload all his baggage to Ella. In fact, his opening up about the past is a major hurdle he has to overcome in order to start a proper relationship with her. But I found the dual identity plotline drawn out. When will Quinn find out she’s Gabby? What will Ella do when she realizes the reason behind Quinn’s reticence? These questions only keep you hooked for so long. After a while it becomes “get on with it already.” In some ways, this reminds me of the Lucas/Landon bit from Easy but not as effectively done because Before You Break is told from both the POV of Ella and Quinn, not just Ella.

That said, I really liked the brief glimpses of Ella’s family. Ella’s family is Polish and we get to see what culture played out in their home life when Ella goes home for Easter. I have a fondness for depictions of immigrant families in fiction, and this hit the spot. It’s the little details that worked: the making of the food for an extravagant meal, the men from the older generation having loud conversation outside the house, older members of the younger generation helping their littler counterparts eat their food, and the way you get sent home with tupperware after tupperware after tupperware of leftovers. It’s chaotic and loud and everyone is in your business, but it’s something I really identify with, coming from an immigrant family myself.

Before You Break is about two kindred souls. Ella’s life was changed by the suicide of her younger brother, and Quinn feels unbearably responsible for the death of his best friend, to the point of wondering why he’s still alive when his friend is not. Their home lives are also a study in contrasts: Ella’s tight-knit immigrant family and Quinn’s lonely but politically driven parents. it’s about working through the grief from losing a loved one, exorcising any responsibility you may will, and learning to live for yourself. I like these themes. In fact, I love them.