REVIEW: Before She Dies by Mary Burton 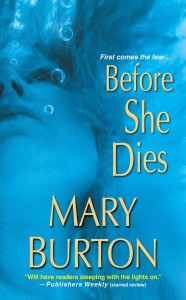 Charlotte Wellington remade herself from itinerant carnival fortune teller to high powered and extremely successful criminal defense lawyer.   Her past is one she doesn’t talk about but the circus’ return to town and deaths stalking women related to the occult make it difficult for Charlotte to keep her secret.  Her sometime lover, Detective Daniel Rokov, is frustrated by the barriers Charlotte is erecting to their relationship and the lack of progress in his case.

Their relationship takes a back seat to the suspense which involves a serial killer targeting women who read fortunes, study witches, and the like.  Various individuals are offered up as the potential killer and we get plenty of scenes from the killer’s point of view. I rarely see the point of these scenes even though I believe that they are a staple of suspense books, at least romantic suspense ones.  I didn’t feel that it added a level of horror or tension.  The danger of being the next victim can be carried out through the failure of apprehending the villain without delving into the mind of the villain. Further, the motivation behind the killer’s actions was given short shrift which was a disappointing denouement.  Given the amount of time I spent with the villain (the book starts out with a fifteen page kill scene), his past and what led him down his course of action would have been a fitting reward.

There is even some mysticism in the book.  The target of the killer are women who he believes are evil.  The killing that the villain does is ritualistic, spurred according to the text by religious beliefs.  “She must confess and be purified first.”  At several points in the book, we are led to believe that Charlotte, her sister, and another woman actually have a gift with the cards and that they can see things from the future in those cards.  Yet, like many of the other elements in the story, this wasn’t explored with any depth but rather alluded to when convenient in order to add a feeling of danger and apprehension.

There were numerous conflicts here and none of them were really well fleshed out, in part because I felt that they were competing for space rather than complementing each other.  First there was Charlotte’s embarrassment about her past. She didn’t want her colleagues to know her roots because she was both embarrassed of them and because she felt it would diminish herself in their eyes. Second there was Charlotte’s desire to keep her intimacies with Daniel Rokov at the physical level only, with multiple reasons for the distance being peppered throughout the story with everything from Charlotte’s personal insecurities to her need to be in control.  Third there was the real issue of Charlotte being a defense attorney and Daniel being a detective.

The romance was afforded far too little page time.  It often seemed that we were treated to more discussion between the main protagonists and the secondary characters about the blossoming romance than we were given actual scenes between the two main protagonists.  Given that romance was really secondary to the storyline, I was surprised me was how very pat the ending was.  Because given that the romance was so spare, I thought that this book might have an edgier ending, instead the ending was harlequin-esque with nearly everyone given positive prospects, except for the villain of course.

The story is readable but I found it disappointing as a romance.  The suspense element was the focus and while it contained no surprises, it was entertaining. This is a case where I liked the voice but didn’t like the story which tells me I need to read more to see where you fit on my list of to buy authors. C