Angela James loaned this book to me and I went on to purchase my own copy ($1.99 using the Kobodollaroff coupon). This book is often recommended on the goodreads forums and it is highly rated. I totally understand the appeal because it is a very readable book plus I think that there are hookable elements such as a fantastical ideal of the bad boy who transforms for one person only. The voice of the author is compelling and her command of the characters make the book seem all the more real. The reason that it is disturbing is the fairly positive light in which this dangerous and dysfunctional relationship is portrayed. In real life or as an exemplar of a healthy relationship, this is a terrible book. It’s a book that you want to talk about with your daughter if she reads it. There may be triggers ahoy for those sensitive to physical abuse. 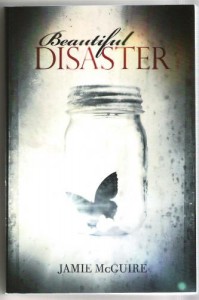 Abigail Abernathy attends an illegal fight in the bowels of her university early on in her freshman year. There she catches the attention of fighter Travis Maddox (whom I believe is a junior). They come into more frequent contact as a result of her best friend, America, dating Shephley (Shep), Travis’ cousin. Travis and Shep live in an apartment off campus and when the dorm showers break down, America and Abby move into the apartment.

Travis immediately attaches himself to Abby but he’s a man whore, bringing home any number of women after drunken binges. Abby recognizes that Travis is bad news right away, particularly given her past, and she agrees to be friends only with Travis.

Travis leaned so close that I could feel his breath on my cheek. “I’m sorry…did I offend you in some way?”

I sighed and shook my head.

“Then what is your problem?”

I kept my voice low. “I’m not sleeping with you. You should give up, now.”

A slow smile crept across his face before he spoke. “I haven’t asked you sleep with me,” his eyes drifted to the ceiling in thought, “have I?”

“I’m not a Barbie twin or one of your little groupies up there,” I said, glancing at the girls behind us. “I’m not impressed with your tattoos, or your boyish charm, or your forced indifference, so you can stop the antics, okay?

Travis is determined that they should be friends and Abby is helpless against Travis’ charisma.  The flirty exchanges between Travis and Abby are very cute.  Their relationship, however, to any one looking on the outside is more of a girlfriend / boyfriend. Abby sleeps with Travis in his bed, platonically. They spend almost every minute together when they aren’t in classes.  Travis worships Abby and demands every one treat her respectfully, even though he has little respect for other women.

While Travis is taking home a different girl every night, Abby starts seeing Parker, a wealthy pre med kid, who happens to be Travis’ fraternity brother.  Abby’s on again/off again relationship with Parker might drive readers crazy but I saw it as a defense mechanism.  How else could she prevent herself for falling for Travis?

I loved the setting of this book at Eastern University and Abby, Mare, Shep, and Travis felt authentically college aged to me, full of self confidence and invincibility but without the responsibilities and worries that post college brings. Eastern U must be a tiny college, though, given that it seems everyone eats lunch at the cafeteria at the same time. In some respects, this setting resembled a high school more than a large university. The dialogue was engaging and fresh. Shep warns Abby off, saying that her having a one night with Travis will lead to Shep and Mare breaking up:

“This isn’t my first rodeo, Mare. Do you know how many times he’s screwed things up for me because he one-nights the best friend? All of a sudden it’s a conflict of interest to date me because it’s fraternizing with the enemy! I’m tellin’ ya, Abby,” he looked at me, “don’t tell Mare she can’t come over or date me because you fall for Trav’s line of BS. Consider yourself warned.”

The interaction between the four was really well done and displayed the volatility of youthful romance.

“He took a swing at Shep when he found out we helped you leave. Abby! Please tell me!” she pleaded, her eyes glossing over. “It’s scaring me!”

The fear in her eyes forced only the partial truth. “I just couldn’t say goodbye. You know it’s hard for me.”

“It’s something else, Abby. He’s gone fucking nuts! I heard him call your name, and then he stomped all over the apartment looking for you. He barged into Shep’s room, demanding to know where you were. Then he tried to call you. Over, and over and over,” she sighed. “His face was…Jesus, Abby. I’ve never seen him like that.

“He ripped his sheets off the bed, and threw them away, threw his pillows away, shattered his mirror with his fist, kicked his door…broke it from the hinges! It was the scariest thing I’ve ever seen in my life!”

There were a number of unbelievable elements such as Travis being not only the bad boy, but a card carrying member of a popular fraternity. He smokes, is an incredible instinctive fighter, never trains, drinks constantly, drives a motorcycle, and is so brilliant he doesn’t need to study. He doesn’t even run or lift weights or engage in any kind of physical activity other than fight occasionally (and even that is not on a regular basis). At one point, he even sings in the cafeteria getting everyone to sing along with him.  His charisma is just that amazing.   Abby is an even more shallow character. We know only that she wants to remake herself in college but into what, I don’t believe if even Abby knows which would be fine except that eventually Travis becomes her whole world.

Travis’ default reaction to everything is violence, no matter the danger in which might place Abby.

Travis barreled his way onto the dance floor, and plunged his fist straight into the pirate’s face, the force sending both of us to the ground. With my palms flat on the wooden floor, I blinked my eyes in stunned disbelief. Feeling something warm and wet on my hand, I turned it over and recoiled. It was covered in blood from the man’s nose. His hand was cupped over his face, but the bright red liquid poured down his forearm as he writhed on the floor.

Travis scrambled to pick me up, seeming as shocked as I was. “Oh shit! Are you all right, Pidge?”

When I got to my feet, I yanked my arm from his grip. “Are you insane?”

America grabbed my wrist and pulled me through the crowd to the parking lot. Shepley unlocked his doors and after I slid into my seat, Travis turned to me.

“Your fist was two inches from my face!” I said, catching the oil-stained towel Shepley had thrown at me. I wiped the blood from my hand, revolted.

The seriousness of the situation darkened his face and he winced. “I wouldn’t have swung if I thought I could have hit you. You know that right?”

He is a scary guy who views everyone as a threat and every situation as a potential fight.  Abby encourages this for all her protestations otherwise.  Later in the book she tells Travis to teach another guy a lesson in manners and Travis goes over and beats the hell out of said guy.

“Did you mean it when you said you didn’t want me to change?” he asked, squeezing my hand.

I looked down at Chris laughing to his teammates, and then turned to Travis. “Absolutely. Teach that asshole some manners.”

Travis lifted Finch’s tray off the table and swung it into Chris’ face, knocking him off his chair. Chris tried to scramble under the table, but Travis pulled him out by his legs, and then began to wail on him.

Chris curled into a ball, and then Travis kicked him in the back. Chris arched and turned, holding his hands out, allowing Travis to land several punches to his face. The blood began to flow, and Travis stood up, winded.

“If you even look at her you piece of shit, I’ll break your fuckin’ jaw!” Travis yelled. I winced when he kicked Chris in the leg one last time.

In some ways, Abby is more of a possession than a person to Travis.  Abby chastises him for acting like he is marking her, peeing on her leg (figuratively), yet despite all the warnings, this is where Abby wants to be.

This book, for its flaws, is compulsively readable. While reading the book, it is easy to get caught up in the fantasy of it and the romanticism of Travis’ strength of feeling for Abby but at the end, you are left with this uneasiness because Travis doesn’t change. He’s still the uber violent rage monster that he was in the start of the book who is routinely destroying things and then asking for forgiveness and Abby is the very young woman who keeps forgiving him.  C

→ Jane
Previous article: First Page: Sylvan Legacy, YA Historical Romance with Fantasy Elements
Next Post: Setting Up a New Library with Calibre: Essential Plugins and Getting to Know Metadata