REVIEW: At Any Price by Brenna Aubrey 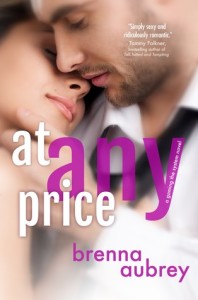 Mia, a struggling pre-med student and online role playing games blogger, has decided to take advantage of the bizarre value society places on female virginity by auctioning hers off. With the reluctant help of her best friend Heath, a careful auction with many safeguards and stipulations is held; the winner is unbearably handsome software prodigy Adam Drake.

This is a challenging set-up for a romance, because it’s a pretty unsavory situation on both ends. Adam’s side is more readily sympathetic: it’s obvious that getting into Mia’s pants is not his primary motive, although that’s not revealed to Mia for some time. It’s harder to accept Mia’s reasoning, and justifiably so — her tendency to lie to herself makes her something of an unreliable narrator.

In many ways this was a typical New Adult story. First person by female narrator, check. Heroine with a traumatic history of sexual abuse, check. Rescue from assault by the hero, check. Gay best friend — no wait, that’s a different subgenre; New Adult male friends are supposed to be straight so you can have a love triangle. I actually really liked Heath: he’s not written as a “fabulous” or sassy stereotype, but because he’s far more forthright and clear thinking than Mia, he gets many of the book’s best lines. (When Mia tells him she’s been reading Cosmo, he retorts,  “Stop right there. If you get your sex education from Cosmo then you are in for a world of hurt—or he is.”) And another way in which the book defies stereotype: although Drake does get into a little bit of icky virginity worship, it’s overall blessedly free of obvious slut-shaming.

Since Mia deeply distrusts men — I guess being gay scores Heath a pass — the deal is supposed to be just one night and no future contact, but the story goes in some unexpected directions and creates powerful emotions as Mia and Drake try to navigate what becomes an untenable situation. I personally would have preferred it if the story hadn’t tried to do everything: the basic plot is perfectly fine without all the fantasy accoutrements of Drake buying Mia expensive clothes and makeovers, taking her on trips, and “loaning” her expensive gadgets. (Readers who are more heavily into Cinderella stories certainly might disagree with me.) Mia’s responses to this treatment are inconsistent, and I didn’t always understand her motivations. The fact that she didn’t always understand them herself wasn’t enough to make her character completely work for me.

I also didn’t get much of an authentic geek vibe from her or Adam, except that the fact that Adam used his wealth to spend time on the International Space Station rang very true. The love scenes had a certain distance to them, as did Mia’s constant harping on Adam’s perfect hotness; in both cases, she seemed to be describing more than truly reacting. The best part of the book may be the plot: its bare bones summary sounds both generic and skeevy, but (much like On the Island by Tracy Garvis-Graves) what actually happens is meaningful, and reveals a lot about both characters.

At Any Price doesn’t have the feel of a professionally edited book. There aren’t any execrable errors, but there are some continuity issues and grammar flubs that could have been cleaned up. I was still absorbed by the storytelling, and though it happily does not end on a cliffhanger, there are enough genuine complications in Mia and Drake’s relationship to make me interested in the next book. Though I was disappointed that the series turned out to be a trilogy… especially since I was hoping for a book for Heath. C