I’m not sure why I picked this book to read.   It’s not like I am a big fan of angel stories.   The cover is okay but not great.   The blurb isn’t all that catching and frankly, when I started the story, it seemed like I had read it before, only with a different cover and different names on the front. 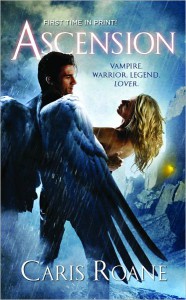 The story is derivative and full of all the things I hate like the mate bond (make the Bahhhnd, Jake for those Avatar fans), sequel bait ALL OVER THE PLACE, a heroine with so many powers no one can even fathom her, Matrix like time bendings, mind bending, channeling (at one point, they have to teach the heroine to fight within 24 hours and so she mind melds with her mate and he downloads into her mind his fighting techniques). YET, I could not stop reading it. There is some strange alchemy here.

The set up is that there is different dimensions of Earth. The first dimension is Mortal Earth, the next level up is Second Earth, etc. The upper levels are closed off until you are called for ascension and then it appears that you can move freely between the levels. (Kind of like a video game, I guess? Except instead of defeating a boss to get to the next level you have to await to be called by a higher power. No wait, this is more like high school and cliques. The higher up you are on the social scale, the more mobile you are. Okay, this is probably not the equivalence you were aiming for).

This book is concentrated on Mortal Earth and Second Earth. Future books seem to focus on upper levels (or at least that is what is hinted).

Alison Wells is a therapist, six feet tall, who has sworn off dating because whenever she has sex with someone, they get injured. Her last bout ended with the guy in the emergency room. She’s giving up her counseling practice to return to school to get her Ph.D. But during her counseling career, she had been counseling a guy named Draven Graeves. It turns out that Graeves is the Commander, a leader of an army of death vampires and other bad guys who want to rule both Mortal Earth and Second Earth.

On the other side, you have Endelle, the most powerful ascendant in 9 centuries (I could be wrong about the number of centuries) and counterpart to Graeves. Endelle’s rule is bolstered by the Warriors of the Blood, a band of 7 Guardians of the Ascendants, all males, who protect Mortal Earth by killing death vamps. Death vamps are created by sucking humans to death. You know a death vamp by their coloring; they take on a blue tinge (better than smelling like baby powder). Endelle and the Warriors also have the help of the Militia Warriors, basically super humans but not as strong as Warriors. Grunts, essentially, or maybe Pawns on the chessboard.

When a being is called to ascend (move up the dimensional ladder), there is a battle between Endelle and Commander to gain that asset. Both want Alison because she is the most powerful mortal to be called to ascend since they can remember. She can do pockets of time reversal, dematerialize. She can speak telepathically and has empathy skills. Bla bla bla.   I’m sure in her spare time, she turns water into wine.

In order to prevent the Commander from capturing the asset by turning her into a death vamp or just getting killed, the Guardian Kerrik is sent to Alison.

The book is essentially about the breh heddren, a mythical mate bond that none of the Warriors of the Blood have ever experienced. UNTIL NOW. Cue music. Kerrick, who has lost two wives and three children to this ongoing battled between Endelle and Commander, has vowed never to take another mate. But the mate bond is SO STRONG that despite their mutual resistance, the two cannot keep their hands off each other.

The breh heddren is sealed by mind diving, sharing of blood and coitus – all at the same time. So Kerrick and Alison resist doing all three but dabble in the others.   They are everything but breh heddren virgins.    One recognizes the mate bond through scents. Kerrik gives off a cardamon smell and the Alison gives off a lavender smell. And these two smells drive each other mad for one another. (as an aside, how many guys are really turned on by lavender?) Will these two crazy agnst-ridden love birds make special transcendental music together? I guess readers will just have to learn that for themselves.

Oh and there is some committee that makes rules that govern the war between Endelle and Commander. I never really understood why these rules exist or why the two abide by them but these rules create the bounds of the plot and the world. Both sides have electronic grids or something and can detect the power signals of all the peeps with “Second” power on Mortal Earth.

I wrote to a friend of mine that the story is a bit whackadoo. There is head hopping, info dumps and an entire romance built around the mate bond. These two don’t fall in love. It’s destiny. Or something. It’s like paranormal soup but it is really readable paranormal soup. Sexy paranormal soup. Like there is a little of Ward. The Band of Brothers who have never experienced the mythical breh heddren will now, in the space of several books published one after the other, all of a sudden fall victim to it. While they don’t speak in slang, they ALL use the term EOS (end of story) to shut the door on certain topics. It was like a Guardian requirement: live without a mate, kill death vamps and use “EOS” at least once per day.

And the word “cried” was used as a dialogue tag non stop even in, what I termed, inappropriate places. “I don’t want to guard her”, he cried. (this is a made up example but I’m just trying to convey a point here).

Weirdly I could not stop reading even though I was frowning at myself the entire time. I knew it was derivative. I knew it was info dumpy. I knew that there was no delicately layered love relationship because the bond was some mythical destiny but not only did I enjoy this book but I stayed up late reading it. AND I’m pretty stoked for the next one.   There were hints dropped here and there about some really interesting future characters and possibly some inter Guardian fighting over a woman.   No Kumbaya here. Some of the Guardians do not like each other, thank god. Truly, if I had to live with the same seven people for a 100 years or more in a high stress environment, I would want to kick the crap out of at least one of the seven.