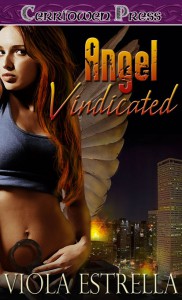 I bought this book because it was the first digital first book to be nominated for a RITA. How exciting, right? I’m not sure if the RITA nomination inflated my expectations but I am sorry to say that my reaction is somewhat (okay, a lot) less enthused than that of the RITA judges.

Angel Vindicated appears to be the start of a series of books although I see nothing new coming down the pipeline as a sequel. Certainly the ending is ambiguous enough that it has all the signs of the start of some series. This is a straight up Urban Fantasy with the requisite loner heroine (even told in the first person) who believes no one really wants her but somehow has three of the hottest men around panting after her.

Abby Angel is a young Angel, only 28 years of age. She’s a bit insecure in her looks because while all the other angels are beautiful brunettes or blondes with luscious hair falling around their shoulders in soft curls, Abby has wild corkscrew red hair. The world building isn’t complicated nor is it well developed. It is set in modern day Denver. The Angels act as a fugitive apprehension service of sorts. Each district has a MOG or Messenger of God who acts as the seer for the community of Angels and ex-Angels she oversees. The Angels are females in charge of delivering a thumbprint to the heart of a demon. Three thumbprints and the demon is dispatched to hell. A demon is entitled to a thumbprint for “corrupting a human to commit a sin.”

The Ex Angels are male angels who do desk duty because it was determined that male angels were too aggressive for this work. Angels are made by the mating of angels. Once angels fall in love, they lose their angelic status (long life and wings) and live a normal life span. This is considered the pinnacle of angel existence–to settle down and have babies.

I will say I thought much of the book was meant to be farcical but I wasn’t sure if this part was because Abby Angel longed for this as well. She was envious of her sister’s good fortune and often wondered what made her defective that ordinary ex-angels didn’t want her.

But one particular ex Angel does want her, Judd. Even though Abby is blind to it, the reader is not. After all, he spends every spare minute with her, is concerned when she is out demon hunting, and is overtly jealous the time she spends with Simeon.

Simeon is the half demon who seduced Abby five years ago and now he is back in her life and her pants. Why Simeon decides he loves Abby is a mystery to me. We never see anything from his point of view and what we do see of him through Abby’s perspective gives you the idea that he enjoyed sexxing her up but not loving her.

Finally, there is human Kaleb who looks like Simeon, likes the same music as Abby, drives a hot car that Abby adores and conveniently for Abby, is not half demonic. He, too, thinks Abby is pretty neat stuff.

This book isn’t much about character growth or relationship developing. Instead it, like many of its UF bethren, focuses on the mystery (who is hurting the Angels) and the resolution to said mystery. At the beginning, Abby Angel is sent to give a thumbprint to a demon and instead four demons beat her up and leave her with a warning that things are going to change and Angels aren’t going to be policing demons any longer. Abby Angel seeks out the help of Simeon when the Angels in charge seem uninterested in her report. The resolution to said mystery is quite the deux ex machina. “Ask and you shall receive,” Matthew 21:22, plays a strong role.

There is no real explanation how angels and demons are made or unmade. I know that angels are born of angel and angel mating but there is early reference to how men used to be Angels and now they were desk jockeys and no longer Angels. They should have been ex-Law Enforcement Angels but they were referred to as “ex-angels”.

I was confused about how angel status was conferred and taken away and how and by whom. In the beginning of the story, Abby explains that there are three types of Angels. Then she goes on to say that only females were Angels. “It became evident several years ago that men didn’t make the best Angels. Too much testosterone and not enough patient had led to multiple reports of demon mistreatment.” There are a few male Angles of Death. At one point of the story, however, all the ex-Angels become Angels again and…yeah, maybe it’s “the Lord gave, and the Lord hat taken away; blessed be the name of the Lord.” Job 1:21 (who knew my familiarity with the Bible would come in so handy for reviewing sexy romance books!)

Part of my frustration with the lack of in depth worldbuilding was due to the fact that a) there wasn’t a ton of character development and b) the worldbuilding was very rudimentary so what was there should have been more consistent and more fully fleshed out.

I did wonder whether this was submitted as a novel with romantic elements and then was considered for a First Book Award because it is not really a romance. It ends with an unresolved triangle with her professing to be happy in Kaleb’s arms while intending to practice kissing with Judd to see where that may take them. . I probably won’t pick up a sequel if there is any. I’m just not that attached to any of the characters or interested in the worldbuilding. C-

EC marks its books up high at Amazon and BN (list price $13) so it is far cheaper to buy it at Cerridwen Press.