REVIEW: An Heir of Uncertainty by Alyssa Everett 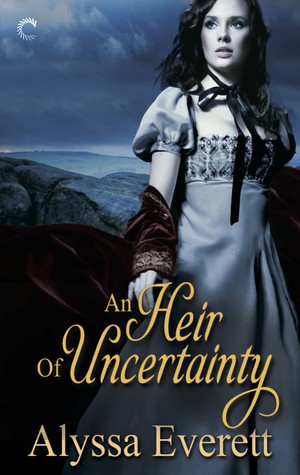 This had two elements I normally loath in a Regency romance: a punning title, and a mystery. I love the title, which is both elegant and appropriate. The mystery… not so much, although my reasons may not apply to other readers.

Lina, Lady Radbourne, is shocked when her young husband dies trying to win a drunken bet; she tells the magistrate there won’t be an heir while barely knowing what she’s saying. By the time she realizes that she is in fact pregnant, the presumptive heir, Winstead Vaughn, has already arrived at Belryth Abbey with his young daughter and teenaged brother in tow. (A rather endearing albeit idealized portrayal of how mild Aspergers Syndrome might express itself during the Regency: Freddie is a very straightforward, “peculiar” lad obsessed with breeding pigeons. I was pleased with the authenticity of Win and Freddie’s relationship, and not at all surprised to learn that Freddie was inspired by family members.)

Initially Win and Lina see each other as obstacles to their security. Both come from poverty and have a lot of shame around it, and both feel that their futures are riding on the sex of Lina’s unborn child. But not only are they attracted to each other, they have a great deal in common. Each is the responsible one who takes care of everyone else. Each has been accused of being a fortune hunter. (In Lina’s case, this is arguably true, though no more than for most woman of her time.) And neither was entirely happy with marriage. Win fall in love with an upper class woman who never forgave him from taking her away from luxury. Lina’s marriage was the kind you’d get if one of the heroines of a Heyer novel actually married the besotted younger man who courts her: she was fond of him, and grateful to him for rescuing her, but there was always something missing. In Win she discovers what it is: he’s a man she can rely on, not a boy she has to take care of. And she badly needs a person to rely on, because someone is making coldblooded efforts to rid the world of her baby — or her.

Lina feels extremely guilty about having strong feelings for another man just two months after her husband’s death, and both characters struggle with their pride, but there’s really not a lot of tension between them; when conflict does arise, it felt contrived to me. Most of the tension in the story came from the mystery, which I’d say is above par for a romance/mystery combination: it’s genuinely puzzling, and there’s a reasonable cast of suspects and some meaningful clues. Still, I had issues with it. Note: I won’t reveal the villain, but my commentary in the following spoiler may make it easier to guess who it is.

My feelings about the mystery reminded me of this quote from A Talent to Deceive by Robert Barnard: “In Patricia Wentworth we invariably find a pair of young lovers, whose love is in one way or another obstructed until the final chapter. One knows from the beginning that neither of these two will be the murderer: wet though they may be, Patricia Wentworth is involved with them, wishes them well, and will provide them with a well-heeled future. One can never know this with Agatha Christie: her young lovers are never angled to produce warm feelings in the reader. They are pieces on a chessboard, to be calmly considered along with all the other chessmen…”

This story takes the Christie approach, but the lack of sentimentality that’s clever in a classic whodunnit seemed out of place in a genre focused on character and emotion. The villain and motive are very upsetting, yet the story treats the ending as if it were mainly a puzzle solved, rather than a devastating betrayal. In my opinion, it needed more foreshadowing and considerably more repercussions to work.

The tone of the story is quiet and graceful in the style of a traditional Regency. (With a little steam.) I’m not well informed enough to be super fussy about period details — as long as a historical isn’t fluffy and doesn’t deliberately flirt with anachronisms, I’m pretty happy — but the information around posthumous inheritance seemed solid. (I did look up a few words that sounded out of place, and they were all reasonably appropriate to the period.) But between the lack of tension and my discomfort with the mystery, my overall impression is, meh. Readers who enjoy the Regency/mystery combination might well like it more than I did. C