For the first third of this book, I had real doubts about whether I would finish it. The hero, Major Sir Harry Lidge, had fallen in love with Lady Catherine Anne Hilliard Seaton, Dowager Duchess of Murther ten years prior but because he believes that she tried to foist a bastard baby on him when she was fifteen and he was twenty, he despises her and attempts, at every juncture to wound her. 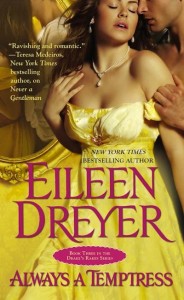 Harry is now one of “Drake’s Rakes”, a spy organization designed to bring down the Lions, a group of Englishman who want to see Wellington killed, and the current royal regime replaced. (at least that is what I think is the purpose of the Lions).  Harry kidnaps Kate on the very thin pretext that she might be a Lion.  This kidnapping sparks an idea in Edwin, the current Duke of Livingston, and Kate’s brother.  He uses a painting of a nude with Kate’s head on it to provide justification that Kate must be institutionalized.  Kate’s family has always held Kate in disgust.  Harry finds himself battling his conflicted feelings toward Kate while trying to protect her from the Lions and her brother.

Jayne mentioned in her review of Barely a Lady that she was troubled by the portrayal of Jack who was inexcusably cruel to the Grace, calling her a whore, casting out her pregnant self, and heaping abuse on her head. Harry follows a similar path. At twenty years old, Harry, the local squire’s son, had worshipped Katie’s father, the Duke of Livingston. When he met Kate that summer, he fell in love with her. Kate begged Harry to marry her, to save her from a marriage Livingston had planned with Murther. Yet Harry was told by Kate’s father that she was pregnant with a groom’s baby and given the opportunity to enter the Army to get away from Kate.

Harry hates Kate for lying to him, making him fall in love with her, for making him enter the Army, and for two failed engagements in the past ten years. Harry isn’t a rational thinker because none of these things are really Kate’s fault. She never lied to him. Harry fell in love with on his own. He blamed Kate for the Army commission (and at one point said it was a banishment) but he was the one that choose that direction. While Kate may have whispered a few things (although this is never elaborated), the inconstancy of his fiancees never seems to occur to Harry.

Harry isn’t a thoughtless, action first type of guy thus his actions toward Kate can’t easily be excused by a natural character flaw. But writing the overly angry cruel hero is one way to ratchet up the angst. It builds sympathy for the heroine and creates a perfect scenario for the grovel, something that seems pervasive in this series based on the reviews of the Drake’s Rakes books from Jayne and Lazaraspaste.

What made Harry’s actions problematic was not only that he has nursed these hard feelings toward Kate for ten years but that they are so easily resolved with just one discussion. It is true that he observed Kate for a few days and discovered she had suffered a terrible marriage with Murther, but not once did he doubt the lies that Kate’s father told him, not even with the stunning evidence of Murther’s cruelty toward Kate. He did not doubt the lies of Kate’s father even after he realized that Kate wasn’t the whore he called her, but more chaste than perhaps any woman he knows.

That Harry’s obtuseness toward Kate, whether deliberate or unconscious, can be resolved with one discussion was incredibly frustrating, yet, once this revelation happens, the story takes a complete turn. Harry goes from being the worst kind of man enacting revenge to a solicitous and tender lover, trying to help Kate overcome her fear of intimacy created by years of abuse at the hands of her former husband, Murther.  Harry is given this opportunity when Kate is kidnapped by her brother, Edwin, and taken to an asylum.  Harry steps forward to say that he is Kate’s husband and thus only he can make decisions about her mental fitness.

The writing tics that were noted in Jayne and Lazaraspaste’s reviews are obvious in this book as well. There are multiple PsOV from characters who have had their own books which added very little. For instance, Grace’s musings about how she wished Harry and Kate could overcome their differences to find happiness appeared out of nowhere and was, I suppose, to seed hope in readers that Harry would get his head on straight. The use of Lady Bea Seaton, an elderly woman who speaks in riddles, is a convenience because she inevitably hold the answers to the mystery that Harry is pursuing.  The overarcing mystery of the group named the Lions pervades the story, provides suspense, and is used to set up later books yet because little about the Lions is ever resolved in the story, I felt it more irritant than aid.

There were two competing internal conflicts. One conflict was that Kate did not want to give up control and the second was that Harry’s dream was to travel the world and see the marvels of the world’s architecture. Kate’s issue with control is dropped and never really resolved and the emotional conflict centers itself around Kate’s desire to stay at her home and Harry’s desire to travel.

Yet, despite this, Kate and Harry’s romance is inevitable and necessary.  Kate is presented as an indomitable spirit.  She has survived and flourished despite her neglect as a child and her abuse as an adult.  What I did wonder is why Kate hadn’t found a beard in society to serve as her husband and protect her against Edwin and his machinations in the past.  She lived a scandalous life and surely she could have found someone who would not be interested in her person or in her property.  But, of course, if she had, she would not have been available for Harry.  If there was one flaw in Kate’s presentation is that she was constantly being saved by Harry.  I would have liked to see Kate save herself once. She was surely capable of it.

For me, Kate was the best part of the story.  Ballsy, sharp witted, and loyal, Kate’s ability to stare down her worst danger brightened every page.  I wanted to spend more time with her and in her head, and less time with Harry.

Harry, setting aside his behavior toward Kate in the early part of the story, was presented as a battle hardened Army man who suffered from nightmares and emotional fatigue from the war.  Their characters, as written, matched and there were scenes in the book that poignantly showed that as the two held each other through the night taking turns comforting the other from their night terrors.

This is an emotional and angsty historical romance beset by spies, dropped plot lines, and bad hero behavior.  I think a reader who has enjoyed the Dreyer series in the past will find this one to be satisfying.  For a new reader to the series, like me, some of the Lion mysteries will be confusing and distracting.  In a less talented author’s hands, I think the problems would overcome the beauty of the romance.  C