REVIEW: The Allure of Dean Harper by R. S. Grey

This is a follow-up to ‘The Allure of Julian LeFray’. Clearly, this ‘allure’ is catching. This particular installment concerns itself with Dean Harper, BFF of the aforementioned LeFray. Harper is a wunderkind New York restaurateur. Our heroine, Lily, is…a chef? A bartender? A blogger? A waitress? A culinary adviser? It isn’t really made clear. She went to culinary school, can spot an amateur mixologist at ten paces, maintains a blog and knows everything there is to know about the city’s restaurants. 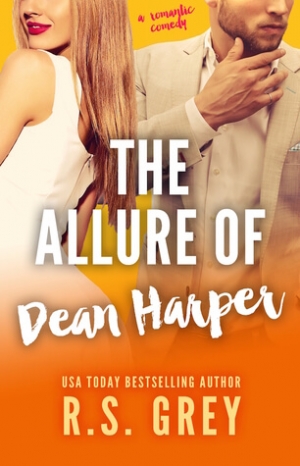 She arrives at Provisions (What kind of name is that? That’s like calling your restaurant ‘Wartime Rations and Gnawing Hunger’) for a job interview and proceeds to knock everyone’s socks off by commandeering the bar and showing off, like Tom Cruise in ‘Cocktail’. But with less creepiness and more pants. When a rugged and demanding customer decides to sass her, she sasses him right back. Rugged and Demanding turns out to be her boss, Dean Harper, and Lily’s burgeoning career (and inevitable slide into Scientological murkiness) is halted.

Lily is fuming. How dare her boss fire her after her insubordination and general lack of professionalism! When Julian (you remember Julian, right? Of ‘The Allure of’ fame?) strongly hints that he’ll withdraw funding from Dean’s project if he doesn’t rehire Lily (talk about burying your lede), Dean is forced to take her on as a consultant for his new eatery. I mean…okay.

Thus follows a storm of sexual tension, arguments, fumbles in the dark and a whole lot of ‘meh’. The biggest problem is that Dean really never seems to warm to Lily. He repeatedly refers to her as ‘poison’, and he does it so often that I started to believe it (I think he means ‘poison’ in a nice way, like alcohol or sugar). Their relationship is so antagonistic and brittle. The series’ earlier couple, Julian and Josephine, pop up in this book, and their appearance only makes the contrast between their warm and affectionate connection and Lily and Dean’s calculated iciness more stark. Dean is cold, emotionally unavailable and invulnerable. Lily is stubborn, tactless and immature. Now, I get it, that sounds like a perfect recipe for them to grow and mature during the course of the book, but it doesn’t happen, or it doesn’t happen soon enough.

It’s disappointing as there’s something very appealing about Grey’s writing (despite one particularly frustrating instance of fade-to-black-itis). The characters didn’t work for me, nor did the cobbled-together-out-of-egg-cartons last quarter, but the humor and Grey’s knack for dialogue dragged it out of the fire somewhat. I await her next book with interest (Like she cares, really).