REVIEW: All My Restless Life to Live by Dee DeTarsio 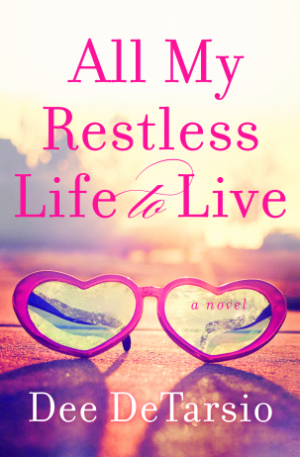 Life is a soap opera, especially for Elle Miller, who writes for one. (Ellen dropped the “n” in her name in hopes of finding a better ending for herself.) When her laptop crashes, she borrows her recently deceased dad’s computer and gets way more than she bargained for.

Elle unravels mysterious communications from his computer, while her mom decides to give Internet dating a try. As Elle tries to save her career at I’d Rather Be Loved with a storyline featuring a trip through Atlantis, she takes a trip to the Emmys, and finds herself in the middle of a romance between a real doctor and a hunk who just plays one on TV. Friends, family, and clues from “the other side” all help Elle figure out the difference between living the good life . . . and living a good life.

When you submitted this latest book to us for possible review, my initial feeling was “communications from the dead: okay, why not?” And based on my response to “Haole Wood” I decided to give it a go. There’s lots going on here in Elle’s life – some of which worked for me and some of which didn’t.

The book has a kind of Chick Lit feel going on which I like. Elle is a funny narrator but she’s not always right, makes mistakes and is human with faults. This made her real to me. I was afraid Adam, her Gay Best Friend, would turn out to be a stereotype and he almost, sorta was. He ended up being a fairly well rounded character which saved him from total cliché-land. But oh, his choice of boyfriend!

Usually I enjoy seeing characters actually doing the jobs they’ve been given in the story. And that was the case for a lot of this book. Elle toils away, writing, editing, even doing a little acting – when her boss forces her to. Then came her inspired pages, and pages, and pages, and pages, and pages of dialog for the Atlantis storyline of her soap. Now if she had commented on them while writing, or talked about how her dad was inspiring her, or for that matter anything at all, it would have been better but I quickly got bored with nothing but straight dialog and went into skim mode.

Elle’s relationship with her mother was one of the best parts of the book for me. The tug and pull and yank and slight snarls here read true of an adult daughter and her widowed mother who love each other despite driving each other crazy at times. I also enjoyed Elle’s memories of her father and how he loved her and made her feel special.

The romance was another so-so aspect of the book and quickly wore thin. He’s just SO into her from the very beginning – though thank God you had their professional relationship end before he asks her out. He’s willing to put up with all her eccentricities, accusations and blow ups until suddenly, when the plot requires it, he snaps only to oh-so-quickly change his mind and forgive her all. Quez is almost too good to believe.

Liam, the others at IRBL and Dr. Brad are an interesting bunch though it’s only really awful Liam who was totally fleshed out as a character. The others were more interchangeable to me and never quite stepped away from the background.

The final scene of the book was a great way to end it. Elle and her mother got some closure over the father’s death, Elle realizes all the wonderful things that have occurred in her life, and everyone else’s, since she started using her dad’s old computer and it all seems totally believable. Elle’s journey towards self discovery did seem realistic to me even if the romance didn’t quite make it. C