REVIEW: All He Ever Dreamed by Shannon Stacey

I hate to tell you this but I was bored for most of the book.  I don’t know if it was that I was reading a Christmas book post Christmas and thus all the holiday decorating, the trimming of the tree, the planning for a holiday party seemed tiresome and pre Christmas, I would have been rah rah rah. But I think the real blame rested on the struggle I had with Josh and Katie as a couple.  I felt that they had very little on page chemistry. 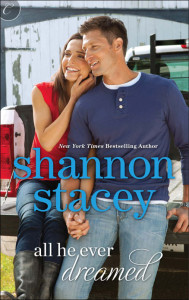 Katie has had a long time crush on Josh and when I say LONG TIME, I mean she is thirty three years old and despite being treated like one of the guys since she and Josh were kids, she has failed to a) put any moves on Josh and b) put any distance between the two in order to find someone else. She must really be into sadism to stick around for nearly twenty years waiting for a chance. I barely started the book and I was frustrated with her lack of action.

Josh and Katie are pushed together when Rose, Katie’s mother, and Josh’s mother figure, pretends to be sicker than she really is. Katie comes to live at the recreation lodge that Josh cannot wait to flee as soon as he and his brothers come up with a plan for its future – either sell it or find a capable manager.

People told Josh all the time that Katie and he belonged together and his thought was pshaw. (which is an old lady sound but perfectly suited to the sedate storytelling that took place in the first third of the book). Even when people told him “Hey, Katie has girl parts and those girl parts might fit mighty nice with your boy parts”, Josh still put her in the friendzone and frankly that’s where she stayed for me as well. I simply didn’t buy the romantic and sexual feelings that he exhibits. He only notices that she is a female when she stands in the kitchen with shorts and tank top? It seems forced for the sake of the story. They’ve been best friends since forever and are outdoorsy types and he’s never seen her in a swimsuit or shorts and a tank?

Worse, Josh’s sudden about face when he sees Katie as sexy female is over the top. He sports wood so often and so hard he can barely walk.  I was so discomfited by his crazed and constant sexual thoughts, I had to take frequent breaks. This felt like classic overcompensation like when a guy’s dick is really small so he goes around bragging that it’s so monstrous, there are no condoms that fit. In order to make us believe that Josh had moved Katie out of the friendzone into the hotpantszone, every thought had to be sexual.

Katie is given the perceptiveness of a five year old.  Boy, Josh is acting really strange around me since he saw me in my boxer shorts and tank. And he’s been having erections.  What was that?  You think he may want to have sex with me? Really?

“Ha! I knew you guys would hook up eventually.”

“We haven’t actually hooked up. He told me to put some clothes on and went storming up to his room. Alone.”

Max stared at her for a few seconds, his head cocked to one side. “Okay, wait. It’s midnight. You guys are alone in the kitchen and you’re barely dressed and…he told you to put some clothes on?”

“Yeah. And ever since he realized I’m not actually one of the guys, he’s been acting weird. Not all the time, but a lot.”

“Probably only when he’s thinking about having sex with you.”

That gave her pause, because if Max was right, that would mean Josh thought about having sex with her a lot.

I never fully bought into the HEA after so much time was spent convincing us that Josh had restless feet. When Katie moves in, he isn’t tantalized by her closeness. He’s annoyed that he still can’t leave. His whole focus is on leaving and thus whatever is next to him is just an obstacle.

The non bedroom and non sexual interaction between Katie and Josh was fantastic and the set up for future couples was interesting without being intrusive.  As always, the interaction between the Kowalski brothers provided wry but necessary humor.   It was the romance that was the tough sell.  There was so little forethought given by Josh about sleeping with his best friend, particularly when he wanted to leave. It was understandable that Katie was willing to risk it, but Josh? For sex?  It just made no sense.

Once Josh and Katie begin having sex  and Josh was no longer running around like a dog wanting to rut, the story settled into a familiar and welcome rhythm where even the sex scenes were infused with authenticity and gentle ribbing:

“This is your fantasy,” she snapped. “How the hell did you picture this working?”

“I think you’re more flexible in my imagination.”

She would have hit him, but her arm being braced against the dash was all that was keeping her face from bouncing off the steering wheel. “Maybe you should imagine how you’re going to get that condom on after I’m in your lap.”

“This was a lot sexier when the real you wasn’t actually involved, just so you know.”

“I already took my jeans off, so we’re doing it.”

“If you leave an ass print on the inside of the windshield, I’m putting that in my report.”

The ending, though, was like the beginning.  It lacked a satisfactory resolution what with Katie not being supportive and the character arc of Josh being a bit too predictable.  While I’m still a fan of the Kowalski’s, this slow moving romance, failed to convince me that these two friends really belonged together as lovers. C