REVIEW: A Tryst with Trouble by Alyssa Everett

Note: This review was originally run in 2012, but at that time the book became unavailable due to Dorchester publishing problems. Carina Press picked it up and republished it.

I requested this book from Netgalley because I was intrigued by the blurb, which begins, “Dogged for years by painful gossip about his father’s homosexuality, the Marquess of Beningbrough—Ben, to his friends—has protected himself by becoming the ultimate man’s man.” I don’t know that I’ve ever seen a romance hero with that particular baggage, and I was interested in how it would be dealt with in a historical context. As it turns out, that aspect of the story ended up being one of my irritations with the book. Overall, A Tryst with Trouble was very much a mixed bag for me. 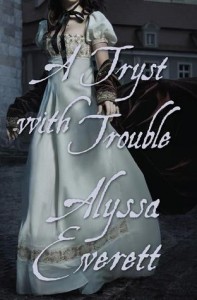 The book, which is told in the first person (by both the hero and heroine) opens with the hero accompanying his cousin Teddy to the home of the cousin’s fiancee. Ben is there for “moral support” (a phrase that struck me as an anachronism); Teddy is there to question his beloved, the Lady Helen, about her rumored indiscretion with a neighbor’s footman. Ben clashes with Lady Helen’s older sister, Lady Barbara. Barbara is not at all like her much admired sister, who is blonde and dainty and just the sort of helpless type that the men of the ton go for.

The interview doesn’t go that well, owing at least in part to the fact that both Teddy and Helen are idiots. Ben returns home to his overprotective mother, but is shortly summoned back to the Jeffords household. A man lies dead in the foyer, his skull crushed, and Teddy is claiming responsibility for the crime, though he says it was an accident. The obvious forensic evidence does not support that conclusion, though, and it seems clear that Teddy is trying to protect Helen. The dead man just happens to be the footman who was Helen’s rumored lover.

Ben and Barbara thus have a convenient reason to be thrown together – both of them want to get to the bottom of what happened to the footman, and absolve their respective relatives of responsibility for the crime. This puts them in situations that they normally wouldn’t be in, given the era and their stations in life – hiding in a wardrobe together at midnight and later alone in her bedroom together for a prolonged period of time. They discover through their sleuthing that Helen was being blackmailed by someone, and that Ben’s cousin John – Teddy’s illegitimate brother – is helping her deal with the blackmailer.

As I alluded to above, Ben’s attitude towards his father’s orientation annoyed me greatly. I expected from the blurb that growing up in the shadow of his father’s scandal would have turned him into a man-whore, and while I find man-whores entirely tiresome in romance, in this case it would have made a certain dramatic sense. But Ben doesn’t seem especially manly (or whorey) to me, and the chief way that his conflicted feelings are expressed is in his internal musings, which are extremely thin-skinned and reactionary:

My father smiled. “A beauty, is she?”

It was a friendly enough question, but it brought a flash of irritation. For years now I’d known he didn’t particularly care whether a girl was a beauty or not, yet we had to go on pretending we were a family like any other.

I stiffened and was about to ask what he meant to imply. That I liked mannish women? That I secretly preferred men?

There are a dozen or more examples I could cite in the book along these lines. Ben’s reactions often feel less like those of a tormented son and more of a whiny teenager: “OMG, my dad is SO embarrassing!” Ben’s father is a sympathetic and likable figure, which made Ben’s hostility towards him all the more aggravating to read.

Barbara is pretty standard as a heroine – overshadowed by her more conventionally attractive sister, she really believes that men are put off by her big boobs and red hair. (She is only lacking the requisite glasses that when taken off reveal her to be a beauty!) She’s developed a bit of a prickly exterior to deal with rejection.

What disappointed me was that there were the bones there for some interesting character growth. Ben and Barbara are both young enough that their parent-induced insecurities were understandable, if only they’d been handled with a bit more depth. Ben’s mother fusses over him excessively, always worried he’ll catch his death if he goes out without a hat. I would’ve liked to have seen this developed more so it wasn’t just a parental characteristic, but perhaps something that really had an effect on Ben. His father is much more reasonable but I do accept, given the setting, that Ben would be conflicted over his father’s sexuality, the shame it brought upon their family (he was teased at school about it relentlessly) and his own feelings about masculinity. Barbara’s father is not a villian, but he’s also not very likable (“when Papa wasn’t happy, he saw to it that no one else was happy, either”) and he contributes greatly to her feelings of insecurity, cutting her down as a matter of course. It’s all presented too superficially to have the impact it should, though.

The relationship between Ben and Barbara is similarly superficial – they spend a lot of time insisting that they don’t like each other. The resolution to the mystery is not entirely obvious (though it gets more so towards the end; I figured it out before the villian was unmasked); on the other hand it didn’t interest me much, but then mysteries often don’t.

Ultimately, A Tryst with Trouble isn’t a bad book; it just didn’t have much to distinguish it or raise it above the mediocre. My grade is a C.