REVIEW: A Touch of Confidence by Jess Dee

WARNING: This review, like A Touch of Confidence, contains lots of sexually explicit language.

For readers who don’t want to spend their time reading a review of a novella I found weak, here’s a quick summary:

“Hi, I’m a big man. You’re a big woman and I’d like to have sex with you immediately.”
Discussion about a lease.

Sex on the floor–he’s sure she’ll be receptive to back door loving later.

Discussion about a lease.

For readers who would like a bit more explanation, here goes. 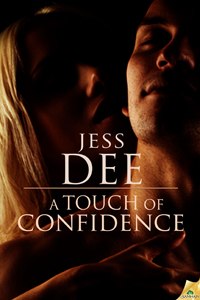 For a romance novel to work, there must be a conflict, something that prevents the hero and heroine from easily finding regular raunchy and/or restful joy in one another’s arms. This book, A Touch of Confidence, begins with a fairly straightforward if dull conflict–the hero has leased a store the heroine thought was leased to her. This conflict is essentially resolved a little less than half-way through the book.

So what’s left? Well, we have the two leads, Jack Wilson, Jr. and Claire Jones, and a lot of crazy monkey sex. Claire and Jack meet and immediately are consumed by lust. Claire thinks,

If she’d been forced to describe him, she’d have to invent a hot Avenger concoction. Like a mixture of Captain America, Thor, Bruce Banner and Tony Stark all rolled into one heart-stopping, sexy guy.

Jack stared at the Amazonian warrior standing before him. With her hazel eyes flashing, her mouth set in a serious expression and her honey-blond hair tumbling over her shoulders, he thought he’d never seen a more fascinating woman….

She was… enchanting, with a voluptuousness Mother Earth herself would envy.

Before you can say, “this book’s just about the sex,” the two are rolling around on the floor of the shop Jack’s leased to someone else, dry-humping to near orgasm. They meet up again the next day, still trying to resolve that pesky lease problem, get in Jack’s SUV and, within the hour, are mauling each other in a parking log. Jack, momentarily using his big head to think, yanks his lips off of Claire’s and tells her,

“Unless you want me to strip you naked and fuck you in this car, right here, in the middle of Mosman,” he rasped, “I suggest you climb out very quickly.”

They check out an unsuitable store, then drive to the one Jack really wants Claire to accept. Within moments of entering that store the two are naked and having wild monkey sex. Let me add, it’s wild monkey sex interspersed with Jack quoting Shakespeare.

He was so turned on, so hot, his cock ached like the devil. If he could, he’d unzip his pants, free his cock and palm himself, just to get some relief. But this wasn’t about him. This was about Claire. About making her feel as beautiful as he thought she was.

“Nor shall death brag thou wanderest in his shade,
When in eternal lines to Time thou growest.”

He dragged his tongue from her clit, over her pussy and down, almost reaching her hidden rosette.

She froze. Her soft moans quieted. Even her breath was silenced. But she didn’t object.

Jack grinned to himself, and wrapped that observation safely away for another time. Then he repeated the action, over and over and over, waiting for her breath to catch again and for her cries of pleasure to fill the room.

There are some non-sex moments in the book. Claire thinks she’s fat, Jack shows her she’s not. Jack’s grandfather is dying, Claire comforts Jack. It’s set in Australia. But mostly, it’s about sex. I guess it’s hot although it all began to run together for me. I was taken aback however by this paragraph.

Tonight he would make Claire his—in every possible way. Starting with her pussy, then claiming her ass, and after, demanding her heart. She had his. Absolutely and completely. It was only fair she give him hers.

I’ve never thought of winning one’s true love in quite this order. (For those hoping for more kink, I must let you know, in this book, she doesn’t get his ass.)