REVIEW: A Taste of Scandal by Erin Knightley

This book is the romance between the Earl of Raleigh, Richard Moore, and Jane Bunting, baker and proprietress of a confectionaire’s shop.  Jane has good reason to despise the aristocracy and first meetings with Richard only serve to cement her opinion that they run London with little thought to the lower classes.  While the clash of classes is a conflict ripe with possibilities, it must also address how one moves within another’s world and I felt that this book did not address it enough to my satisfaction. 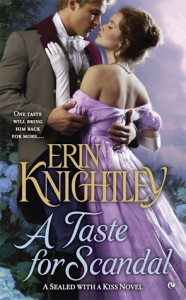 Richard Moore, Earl of Raleigh, is presented as a bit of a feckless diletantte. He parties hard and avoids his responsibilities. His parents wish for him to settle down but he is not done plowing his fields. He promises, however, to “marry the best damn paragon of English womanhood the ton had ever produced” when it is the right time. Of course the next person we meet is Jane Bunting, a poor baker, and the opposite of perfect English womanhood.

Jane Bunting’s rough hewn cousin returns after months at sea. Richard hears her cries of delight and mistakes them for fear. Believing he is saving a maiden in distress, Richard rushes to save her and engages in a fisticuffs with her cousin, destroying property within the bake shop. After trading barbs, Richard is somewhat shamed into providing funds to Jane to repair her shop by getting Jane to agree to teach him to bake as she is too full of pride to take his money even though she should take it because he decimated her china, glass cases, and baked goods.  Jane is kind of a bad business woman.

Jane provides for herself and her brother as an amazing baker. Her shop is successful but does not allow for extra fripperies and her lease is always in jeopardy because of a prudish and jealous shopkeeper across the street. Why Jane has no suitors isn’t addressed. She has only her brother and her cousin. No friends. No other family. No lovers. Making her isolated is a common artifice in romance but it lacks believability and I am chafing more and more at this.

What Jane does have is a packet of letters left to her by her mother.  These letters, at times, guide and justify Jane’s emotional interaction with Richard. I found them more corny than cute and a bit of an obvious plot device which served to only highlight Jane’s isolation.  Jane starts thinking if Richard as a suitor and love upon the first appearance of these letters which was odd given that she purportedly had no affection for titled men and Richard has only been a thorn in her side.

Richard does grow to appreciate the hard work that Jane puts in as a baker and those are the rare moments that I find him tolerable in the book.  He’s a fairly shallow person and I wonder why Jane would fall for him unless it really is just his pretty face and plump pocket.  In the beginning, his boorish behavior of put downs and snide remarks is passed off as the actions of an adorable rapscallion but thankfully he changes about half way through the book, but he still comes off as a selfish lout, using another debutante whom he has no intention of courting as cover against his mother’s matchmaking schemes.

One scene I really hated was when Richard and Jane were waltzing in Hyde Park.  Because a shopkeeper doesn’t need to be concerned about propriety, right?  After all we were told that she was only holding onto her business because her landlord believed her brother would be taken over soon and she isn’t being targeted by her prudish shopkeeper neighbor, right?  Jane just did not seem like the type of person to place herself and her brother in that kind of jeopardy. I was disgusted at Richard for treating Jane with less care because she wasn’t worthy of marrying.  Even his father calls him out:

“Damn it, Richard, what is wrong with you? I certainly do hope you love her, because pulling a stunt like that could ruin a lady and land your neck squarely in the parson’s noose.”

“You can’t think I would have done such a thing with a lady of the ton, can you? Really Father, I know well enough to avoid that sort of trap like the plague.”

As I mention, Richard does reform but it happens too easily, without any internal struggle.  The class issue is resolved too easily and the rubble that Richard leaves in his wake isn’t really addressed.  There’s a bit of a fairy tale quality to the ending.   There are moments of humor and Jane is admirable. I was not much of a fan of Richard.  C

Previous article: Friday Film Review: Ziggy’s Gift and A Wish for Wings that Work
Next Post: Jayne’s Best of 2012 List