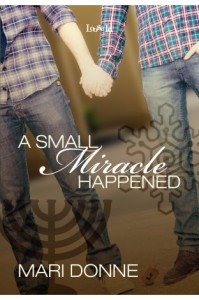 Dan accepts an interesting new job, only to discover after he moves that he’s the only Jewish gay man in a small Midwestern town. On the first night of Hanukkah, he’s a bit homesick and very lonely. Then the mailman delivers a box containing his menorah to the wrong house.

Chris sees that misdirected package as an excuse to knock on his attractive new neighbor’s door. He doesn’t know a thing about Judaism, but he’s willing to learn, especially if it means becoming better acquainted with Dan.

Eager for company, Dan explains the meaning of the menorah and introduces Chris to less traditional amusements like a game of strip dreidel. Soon they are celebrating long into the nights with sweet, sexy fun. As Dan and Chris light a new flame each night, what started as a playful fling deepens into passion that promises to outlast the eight days of the holiday.

Tis the season for holiday novellas and I was happy to discover not just one but two new authors to try all while reading about Hanukkah romances. While I liked parts of “Miracle,” other aspects of the writing style are not ones that work well for my reading enjoyment.

What worked for me are the two main characters Chris and Dan. They’re both just darling people. Nice, easy to get along with, open to new things – and I really don’t mean that in a sleazy, sexual way although it does apply – and willing to take a chance on their feelings. They’re average, everyday, condo renting, day job working, considerate of others young men of whom their families can be proud. I love seeing people like this – people I might actually meet on the street in my neighborhood – get their chance at romance. We’re not all cut out to be SEALs.

The hawt is quick, as is the slight awkwardness afterwards, but these two know what they want and they want each other. The sexual relationship progresses rapidly- but safely. HIV status is mentioned and condoms used – and includes a scene of strip dreidel that I’ll bet Dan’s Bubbe never taught him. The alcohol consumed leads to questions of consent and implied consent which I was glad to see addressed and laid to rest.

Then I started seeing signs of the dreaded “telling and not showing.” And not only telling but retroactive telling. Chris cooks latkes for Dan one evening and then there’s more lubed whoopee. That scene ends and suddenly in the next one we’re reading about how – the day before – Chris had researched Jewish food online and decided what to make. I don’t like telling but I’d prefer it before showing the outcome. There’s also a lot of telling about the details of Hanukkah. I can understand why this is included for people who don’t know much about the holiday but it does drop the action to a crawl.

I do love Dan’s mother. She’s forcefully nice even if she embarrasses Danny in front of Chris. However that is a mother’s prerogative. Perhaps religious Jews should be aware of Dan’s feelings that if he’s not keeping the rules of Leviticus, he might as well go all the way and eat pork sausage.

The epilogue certainly goes on. And on. And on. It’s lovely that Dan’s Jewish family is so embracing of their sexuality but did Chris’s Christian family have to come off as quite so homophobic? And did the epilogue have to hammer this home quite so obviously?

The quick romance was fine. The relationship stuff is fine. The joking and paling around with Chris’s gay friends is fine. But the telling and the seeming dismissal of Chris’s family as uptight – his uncle is a minister, you know – was wearing. C