REVIEW: A SEAL in Wolf’s Clothing by Terry Spear

I mentioned a while back that I wanted to read your werewolf series and somehow your publisher, Sourcebooks, caught wind of this and the publicist sent me your entire series, both backlist and an ARC of the next book.  I was overwhelmed with the generosity and sat down immediately with book one. Unfortunately (and I can’t remember why today) book 1 of the series never captured me. I put the book down and never returned but every now and again I would see your name and think to myself, I need to read a Terry Spear book.  When “A SEAL in Wolf’s Clothing” appeared on NetGalley, I thought it was a sign. I guess I thought it would be like a Reese’s peanut butter cup: two awesome things smushed together into even more delicious thing. 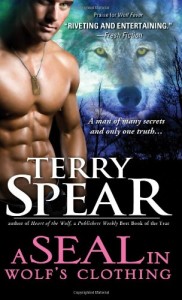 It wasn’t until I started reading the book that I recognized the ridiculousness of the setup.  A shapeshifting SEAL operative?  Wolves are not the first animal one thinks of when the ocean is conjured.  And what is a werewolf doing working with the US government when the wolves aren’t even “out”?  Talk about failing in the “not drawing attention to oneself” test.  But the incongruousness of the setup isn’t even the problem here as SEAL is used as a short cut for “hot, strong, and brave.”  No, the problem is that the hero comes off as this unrelenting misogynist.  I figure by the kind of snarky tone of the hero in his narrative points of view that I’m supposed to find him endearing and perhaps that is how some readers find him.  To me, nearly every time the hero opened his mouth he rubbed my fur the wrong way. (Pun intended)

Finn is on the same SEAL team as Hunter. Hunter was the target of an assassin but he is now off honeymooning which leaves Hunter’s sister, Meara, vulnerable. Meara would like to find a mate and with her overprotective brother out of the way, Meara thinks this is the perfect time to assess a field of candidates. Using her family’s vacation cabins as cover, Meara writes a vacancy notice intended to send a message that she is looking for a strong alpha mate. Finn quickly puts the kibosh on this and spirits Meara away for her own good.

Let’s examine how the book opens.  An assassin may be after the heroine.  Does the hero go to her and say “hey, your life may be in danger. Let’s make a plan together to keep you safe. I’ll help in whatever way you need.”  No, instead our hero sneaks into the heroine’s home. He discovers that she is intending to look for a mate by rifling through her notes.  He then proceeds to install a hidden camera in her living room and listening devices in her phones and bedroom.  When she comes into her home with one of her potential mates, he proceeds to strip down, shower, and then walk around naked in her bedroom to stake out his “territory” in front of the other werewolf.  I was waiting for him to whip out his dick and just piss on her leg, but I was spared this.

He does get around to telling her that she is unsafe and that she is going to do what he says or else and the heroine, no dummy, acquiesces.  See Mr. Hero, you don’t have to be a crazy stalker dude with a holier than thou attitude. I thought the heroine showed good sense throughout the book, recognizing her limitations and not trying to do things that would put the two in danger, yet, the hero never treated her with enough respect. When they get to an immense and expensive home they are going to use as a safe house, the heroine asks whose it is. “You don’t need to know.” is Finn’s response but he doesn’t even give her a reason for this. Frustrating! Even more frustrating was that Finn would share information with another woman, an “operative” (not sure where she fell into the SEAL dynamic, but a lot of that wasn’t well explained. There was some implication that the woman was part of a SEAL team but since there are now women in SEAL teams, I just wasn’t sure) but not with Meara.

As for the SEAL thing, it gave a reason for Finn to be competent romance hero but I did wonder if there was a contractual requirement that the four letters be inserted every so often because there were strange sentences like Yogi Berra would spout:

Finn had known he’d be taking on a handful of trouble when he made the decision to protect her. But what was a SEAL to do when a wolf needed protection?

On the werewolf side, we had heightened ability to smell and increased strength but almost nothing about the pack dynamic. There wasn’t anything interesting or original and very little effort was given to build a compelling alternate world. Instead, this is primarily a romantic suspense set in contemporary time with the wolf/SEAL attributes tacked on to provide cover for more extraordinary exploits and a packet of shorthand characterizations: “She was a werewolf, and that meant she reacted instinctively. Well, because she was an alpha werewolf. A beta probably wouldn’t have.”

From a romantic suspense standpoint, the suspense portion was fairly tame until the last half to last third of the book. More time was spent building the sexual tension between Finn and Meara and in the head of what will presumably be the next hero in the series. This book may be of interest to romantic suspense fans but I don’t think seekers of werewolf books with pack dynamics will be satisfied. I came away with the feeling that the story was decently written but not to my taste. I think it would have been much better without the SEAL or wolf aspect. C