REVIEW: A Passion for Pleasure by Nina Rowan

Your first book, A Study in Seduction, was the subject of intense debate between myself and Sarah Wendell of SmartBitchesTrashyBooks on the issue of the heroine’s believability as a mathematician. Spoiler: I liked it. I haven’t had great success with historicals and was eager to read the follow up featuring the musically inclined hero, Sebastian Hall who was the brother of the hero in A Study in Seduction. 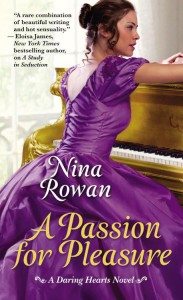 The Hall siblings are suffering from a fall from social grace after their mother ran away with a Russian soldier.  Their father, the Earl of Rushton, is a humorless man but one who cares a great deal about his children.  He worries about Sebastian after Sebastian leaves a prestigious conducting position at the Court of Weimar in Germany.  Rushton orders Sebastian to marry and settle down or lose his allowance.

Clara Whitmore is the daughter of Baron Fairfax. She married a man approved by her father and had a son, Andrew.  When her husband died, Fairfax was ceded guardianship and ousted Clara from his home, declaring that she was responsible for her husband’s death and that she was not a fit parent.  Clara holds a life tenancy in a property that she’d like to sell in order to barter the funds to debt ridden Fairfax in exchange for her son.  When the courts rule the property can only be transferred to a male, Clara offers a marriage of convenience to Sebastian.  She will then transfer the estate to him and he can sell it.

Clara’s crush on Sebastian started long before she makes the offer of marriage.  Sebastian taught piano lessons to her brother and her when Clara was younger and she had always envisioned him as the epitome of a dashing man.  And he was.  But since he lost the use of his right hand, Sebastian’s confidence and zest for life has all but disappeared. Now he recognizes that a small wren of a woman like Clara has more depth that the debutantes he used to squire around.

The idea that it takes a disfigurement or disability to make someone less shallow is a little disconcerting but what troubled me the most is how quickly Sebastian moved from “Clara Whitmore is a girl I wouldn’t have noticed before I left the Court of Weimar” to “I can’t wait to get in her pants.” He segues from lust into love even more rapidly.  Clara’s feelings for Sebastian are withheld, almost in a contrived fashion.  She doesn’t want to love him until he accepts himself which  didn’t fit  Clara’s earlier and previous feelings for Sebastian.

The real emotion that Clara showed for the loss of her son resonated more strong than the romance between Sebastian and Clara. I never really got a sense for either of them. Yes, Sebastian was tortured because he could no longer play the piano and no longer compose his music but his musicality didn’t really sing to me like Lydia’s love for math did in the previous book.  Clara’s feelings toward Andrew seemed stronger than her feelings toward Sebastian.

The throwaway plot of Clara’s uncle finding plans for a special code creating machine seemed ill suited for this book and appeared to only be included to set up Sebastian’s brother’s story.

Finally, the issue of Sebastian’s mother comes into play and while I appreciate the thematic issues of parenthood from Rushton to Sebastian and Clara to her son, I felt the ending was rather hamfisted. C