It’s taken me way too long to write up my review of your latest Regency romance A Night Like This. I finished it weeks ago and found it wanting but couldn’t figure out what exactly it wanted. So, I went back and read several older books of yours I think are grand. I revisited a few of the Bridgertons and caught up with Miss Miranda Cheever and her wonderfully dry diaries. What those books have that this one doesn’t is underpinning. I don’t mean heft—your books are light and that is often what makes them such lovely reads. But the books of yours I love all tell stories bolstered by concrete details that make your characters and their choices seem convincing. In A Night Like This, the characters are vaguely constructed and their motivations hazy. A Night Like This is, like most of your books, well-written, full of wryly humorous vignettes, and fun to whip through. But, when I’d finished it, I knew I’d never feel the desire to read it again nor would I heartily recommend it to others. 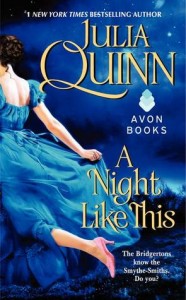 The novel is the second in the Smythe-Smith series. The Smythe-Smiths are famous in the Quinn world for their awful annual musicales. The hero of this book, unlike his female relatives, does not perform in these sonic atrocities. In fact, Daniel Smythe-Smith hasn’t even attended one in three years. Rather, he’s been on the run, traveling all through Europe, trying to avoid assassins hunting him at the behest of Lord Ramsgate whose son, Daniel’s friend Hugh, Daniel inadvertently crippled in a duel. (I disliked this premise—the duel seemed unlikely given the men involved and it irritated me Daniel’s and Hugh’s lives are ruined because Daniel slips in the mud.)

Daniel has returned home however because Hugh has forced his father to call off the hunt. Daniel’s first day home just happens to be the day of his family’s annual performance. (Again, this seemed contrived to me.) Daniel, who doesn’t want to interrupt the musicale, sneaks into the rehearsal room to watch the show and realizes that the woman playing the piano is not a Smythe-Smith. As he stares at her, wondering why a non-Smythe-Smith is performing, she looks up and sees him staring at her. And Daniel is instantly, utterly ensnared.

Time stopped. It simply stopped. It was the most maudlin and clichéd way of describing it, but those few seconds when her face was lifted toward his . . . they stretched and pulled, melting into eternity.

Even his thoughts were tongue-tied.

Her hair was lustrously dark and thick, and it didn’t matter that it had been pulled back into a serviceable bun. She didn’t need curling tongs or velvet ribbons. She could have scraped her hair back like a ballerina, or shaved it all off, and she’d still be the most exquisite creature he’d ever beheld.

It was her face, it had to be. Heart-shaped and pale, with the most amazing dark, winged brows. In the dusky light, he couldn’t tell what color her eyes were, and that seemed a tragedy. But her lips . . .

He dearly hoped this woman was not married, because he was going to kiss her. The only question was when.

The woman, Anne Wynter, is equally instantly taken with Daniel. After the concert, Daniel finds Anne in a deserted hallway and within minutes of meeting one another–Anne is the governess to the daughters of Daniel’s aunt-are wrapped in each other’s arms and kissing as though there is no tomorrow. Daniel goes a bit batty.

Still, he was not ready to let her go. She smelled like England, of soft rain and sun-kissed meadows. And she felt like the best kind of heaven. He wanted to wrap himself around, bury himself within her, and stay there for all of his days. He hadn’t had a drop to drink in three years, but he was intoxicated now, bubbling with a lightness he’d never thought to feel again.

It was madness. It had to be.

From that moment on, Daniel is determined to make Anne his. He is single-minded about his pursuit; I found this hard to understand. Daniel, like so many Regency heroes, knows the rigid social structure his class swears by. Yet he seems almost oblivious to how difficult his courtship could make life for not only himself and Anne, but his family as well. He acts more like a randy teenager than a socially aware adult. He is charming, but not very credible.

Anne is equally unlikely. She’s not who she claims to be and she lives in terror of having her fake credentials unmasked. Her life story seemed over the top to me. Despite having suffered extreme adversity early on in her life, she’s still gorgeous, kind, funny, smart, and, until the end of the book, exceedingly level-headed. She’s the reverse of Daniel—she’s obsessed with the differences in their social statuses and mentions at least a hundred times she’s a lowly governess and he’s a lofty earl and thus THEY CAN”T BE TOGETHER.  Much of the book is spent with Daniel dreamily nattering on and on about how beautiful and wonderful and perfect Anne is while Anne is wringing her wrists over how threatened she feels by everything.

To be fair, there is a VERY BAD MAN after Anne and BAD THINGS do happen because of this knave.  He is, though, just a bad man. He’s not very smart, his planning is poor, and his motives are at odds with his life goals. He didn’t do a thing for me.

The second half of the book, sadly, rates a C. Not only do both Anne and Daniel behave in TSTL ways but their courtship takes an almost creepy turn. I disliked intensely the way sex and virginity was handled in this novel.

[spoiler]Anne first refuses to sleep with Daniel because he—according to her—can’t marry her. He tells her he wants to marry her. She leaves him, things happen and then she returns, and offers to be his mistress. He says no, he wants marriage. She says she’s not worthy of him because she’s not a virgin. He says he doesn’t care. He asks for her hand again. She accepts and agrees to let him make love to her that very night. And then she says–and this unsettled me–she’s decided she’s is now a virgin, that her other time (which she chose—she wasn’t forced) doesn’t count. I think that in some way this is demeaning to Anne and to the sexual choices women make. Daniel loves her, she loves him, why does she have to become pure for their love to be consummated?[/spoiler]

I also found the drama at the end of the book cartoonish and contrived. The entire book is full of coincidences—this is what I mean, in part, by lack of underpinning. Rather than creating viable reasons for the plot and characters to evolve organically, the book relies on unsupported assertion and calculated unlikely chance. By the end, Daniel has saved the day, Anne has embraced her true self, and society treats them indulgently. All three things happen just because they do rather than because the story works in such a way that those things are the most natural outcomes.

If you adore Ms. Quinn’s work, you’ll adore this book. It’s got all the things she does well. But, if you are like me, cranky when faced with a plot fueled by happenstance and characters that exist by fiat rather than by layered, viable details, this book will probably irk you. Though it was—I must be honest here—a fun, fast read, it’s not a book that stands the test of even a week’s time. I give it a C.