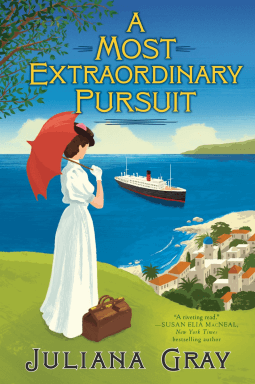 February, 1906. As the personal secretary of the recently departed Duke of Olympia—and a woman of scrupulous character—Miss Emmeline Rose Truelove never expected her duties to involve steaming through the Mediterranean on a private yacht, under the prodigal eye of one Lord Silverton, the most charmingly corrupt bachelor in London. But here they are, improperly bound on a quest to find the duke’s enigmatic heir, current whereabouts unknown.

An expert on anachronisms, Maximilian Haywood was last seen at an archaeological dig on the island of Crete. And from the moment Truelove and Silverton disembark, they are met with incidents of a suspicious nature: a ransacked flat, a murdered government employee, an assassination attempt. As they travel from port to port on Max’s trail, piecing together the strange events of the days before his disappearance, Truelove will discover the folly of her misconceptions—about the whims of the heart, the motives of men, and the nature of time itself…

Well, I can say after absolutely loving The Duke of Olympia Meets His Match, I was psyched for more. The excerpt made me even more excited to read what was coming next. The beginning of this book was a little odd but I could go with it. Then came the end when I felt perplexed at what had happened. Or not happened. I couldn’t tell.

I didn’t know to expect the woo-woo stuff. And the modern people in the prologue – who are they – and what are they searching for? “The Book of Time” mythology stuff kind of reminded me of some of Elizabeth Hoyt’s books with the fables. I was okay with that. But a spectral Queen Vickie? At that point I was at woo-woo overload with still more to come later.

The luscious writing descriptions made me happy. And the keen characterization of Miss (Emmeline Rose) Truelove – balanced on knife edge of Society, always aware and alert to unspoken undercurrents, quick to sense which way to veer. I immediately got a firm handle on the image and person of Adonis boy/amiable idiot Freddie. The Dowager lays out the importance of Emmeline going and so she goes, with Freddie, “that very day, talley-ho and never mind the tooth-brush or hair oil.” I’m just throwing in how unusual it is that Trulove isn’t a suffragette and Freddie is astonished at that.

Emmeline certainly has that turn of the 20th century “intrepid British female forging into the unknown with perfect belief that she will be fine and all will do her bidding even if it’s in the wild corners of the Med” attitude. One encounter with a mad Greek goatherd and his madder goats shows her differently and that “outside the gentle shelter of Anglo-Saxon chivalry,” it helps to have a man to clear up misunderstandings.

Truelove seems so practical and no-nonsense. There to reel Freddie in and keep him “honest.” Still there are hints about Freddie not quite being what he seems. Their interactions are such fun and a bit madcap. From almost the start though I did have my questions about the relationship. I had pseudo guessed at yet another para aspect of the book but it took the reference that Truelove and Freddie thought was garbled to clinch it. Well, in for a penny para in for a pound so why not add this to the mix.

The denouement of the search is rather like Raiders of the Lost Ark in that no sooner is one felon bested and one situation overcome then another pops up or develops to continue the rousing danger. Then suddenly the villains are vanquished, everyone is steaming towards Athens and I’m wondering when we get our explanations. What just happened here? Then we’re on to a kinda wrap up with mention of Einstein and time and space and matter. I’m still waiting for some facts. And will be kept waiting it seems.

I am conflicted about this book. Parts of it I adore and had the best time reading. Emmeline is a wonderful, complicated character – full of intelligence, common sense but with a wisp of whimsy and romance in her soul. Her practicality drives her on and duty formats her actions. She has, for the most part, a will of iron and will not be turned. She certainly understands the reality of Freddie. Freddie is flawed in ways that made me say “a romance hero? Hmmmm.”

Their interactions are a bubbling joy to experience. I couldn’t help but imagine a blond Hugh Laurie playing at delivering his lines like Bertie Wooster to throw Emmeline off the scent of his intelligence and training as … what? an Edwardian MI6 agent? Theirs is an extraordinary pursuit of their object which enthralled me.

Now the woo-woo stuff took me totally by surprise and not in a good way. Some of it I could swing with, parts of it were fine but more stuff kept happening. Why Queen Victoria? What power did Emmeline have to call her or her father into her current physical realm? And the Americans. Where did they come from because obviously they came from somewhere somehow. Again no explanations are even attempted. Then the new Duke of Olympia. WTH? Is his and the deceased Duke’s interest in their institute explained in earlier books? When the book ended, I felt I was still out to sea on all this. I don’t mind paranormal but so many aspects and with no finishing touches leaves me more annoyed that wowed.

It’s also not really a romance. I’m not even quite sure about the ending. What is Emmeline agreeing to? Confusion – I don’t like it. So, parts of the book are A-Ok fine for me and parts – important parts, mind – are not. C