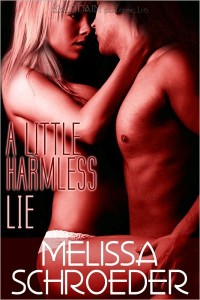 Dee has a secret. A BIG secret-‘she's the daughter of a mafia guy who murdered someone, and she's been on the run for ten years after someone connected to the FBI's Witness Protection program betrayed her. Which means Dee isn't into relationships or any sort of connection that will tie her down to a place long-term.

A Little Harmless Lie is a fun little story, but it takes some serious suspension of disbelief to enjoy it. (As it happens, I like suspending my disbelief-.) But I have some issues.

Issue 1: The drama that ensues around Dee's past in the last third of the book forces some of the developments in the emotional relationship between Dee and Micah. When this happens in romance novels (and it happens a lot), I get a little irritable. Split-second decisions about love that are made because of flying bullets, hospitals stays, being held at gun-point, and other extreme events are not often emotionally satisfying. Dee and Micah had progressed in their relationship, but they still had trust issues to work through when the bullets started flying and I didn't totally buy into their HEA.

Issue 2: There's a distracting side-story with an ex-FBI agent from Dee's past and whether he is/was in love with her.

Issue 3:   After ten years with no leads-‘despite investigations by the FBI, a former CIA dude, and private investigators-‘someone has an "Aha!" revelation and figures out who within the FBI betrayed Dee and thirty minutes later they end up in a shoot-out with the dirty agent. Cue suspension of disbelief.

Hawaii, which is what drew me to the book in the first place, doesn't have a big role in the story. The descriptions of the ocean and beach were nice, but it didn't satisfy the craving I had for arm-chair traveling to a warmer climate.   This brings up something I often think about: choosing a book for the setting, instead of the story, and whether the setting becomes its own character. In A Little Harmless Lie, Hawaii is just the place where the story occurs-‘it's not particularly integral to the arc of the story. Often when I crave a specific location in a book, I am seeking a story where the setting takes an active role in the progression of the story; I want to imagine myself there.   A Little Harmless Lie didn't offer the immersion in the location that I was seeking.

A Little Harmless Lie earns a C. It's a nice bit of escapism for those readers willing to suspect their disbelief over matters concerning witness protection and the mafia.

p.s. Dear Readers, I'm still in a Hawaii mood and would love book recommendations. Please and thank you!