This book was recommended by two very disparate parties and the blurb was quite intriguing; however, the blurb and the story are a bit at odds with each other. Blue Echohawk is attending her senior year of high school. One class is taught by Darcy Wilson, a history teacher who uses literature texts to interest his students. Aside from the fact that I think using Shakespeare as a historical text is problematic, Darcy’s style of teaching is interesting.  We get multiple paragraphs of Darcy teaching his class about Joan of Arc, Greek gods, Julius Caesar. There are a lot of history lessons in this book. Maybe if I was younger, I wouldn’t mind, but these became really tiresome paragraphs to read.

In that class, Blue is challenged to write her history. This was the most interesting and poetic part of the story. In fact, as Blue recounts legends told to her by her father, Jimmy Echohawk, the prose was beautiful. However, those moments were too few and were muddled with other writing which was overly didactic and obvious. 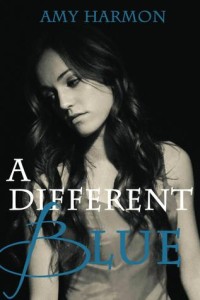 When Blue’s father dies, Blue is sent to live with a distant relation who is, at best, a careless caretaker.  Blue grows up to be a kid with a bad attitude. She sleeps around, mouths off to her teacher, Darcy, and is generally rude to most everyone. Blue’s storyline as the jaded high school antagonist and brilliant wood carver is pretty obvious. About every after school special is addressed from pregnancy to school shootings. The shooting scenes, in particular, was super random and people that started out playing a big part in the story early were totally forgotten after about the first third.

Early on one of Blue’s friends was portrayed as having both feminine and masculine traits. Blue is irritated by this and I thought it might be a great example of Blue learning to accept her friend’s different sexuality. Unfortunately, Blue’s action goes unchallenged and later this young man was portrayed as mentally unstable.  This made me very uncomfortable and not in a good way.  Later Blue, who has shown no religious signs at all, prays to God and feels redeemed.  I just wasn’t sure what to make of that.

The one positive thing is that no relationship develops between the teacher and student until after graduation although feelings may have begun during the school year.

This is primarily Blue’s story as she moves from high school into adulthood,  but her character came off as inconsistent.  She was sullen and stoic in some passages and then in others randomly blurting out her feelings and emotions in others.  The dark moments that are pivotal for Blue’s character development came off as a cynical emotional ploy.  Moreover, I was really bored through the first 40% of the book and considered DNF’ing it.  But because it came recommended, I thought I would power through.

The last half deals with Blue post high school as she deals with fall out about her identity, her feelings for Darcy, her increasing talent as it relates to wood carving, and a couple of other after school moments.  I didn’t see Blue really grow as a character.  Yes, she became less smart mouthed, but she didn’t have any run-ins with authority figures either.  I struggled to see her growth as organic instead of touched by a moment from God.  I can see how this could be read as a moving emotional story but I was discomfited by the overt messaging, some of which didn’t ring very authentic to me.  C

→ Jane
Previous article: DA3 Interview & Giveaway: The MacGuffin
Next Post: Thursday News: A Stark in the Streets and a Wilding in the Sheets