REVIEW: A Dance with Dragons by George R.R. Martin

Has there ever been a more anticipated fantasy novel than this? Maybe, but I’d be hard-pressed to think of it. A Game of Thrones, the first novel of your A Song of Ice and Fire series, changed the face of epic fantasy. Made it darker. Grittier. And of course, that thing that happened at the end. It reminded us that the so-called ironclad rules of epic fantasy weren’t that ironclad after all. When HBO decided to adapt your series for television, I admit I was relieved. Maybe this would serve as the impetus to bring the long-awaited A Dance with Dragons to bookshelves! And lo and behold, after five years of waiting, it arrived. The real question is, however, was it worth the wait. 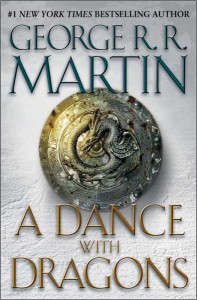 For readers new to the series or who came via the TV show and are unaware of the history, the previous installment — A Feast for Crows — and A Dance with Dragons were originally supposed to be one book. But because the page count was increasing with no end in sight, it was split with half of the POVs in AFFC and the other half in ADWD. Now I was one of the people who actually liked AFFC and looking back, I remember thinking that ADWD might potentially be painful to read. Sad to say I was right.

As I’ve said before, the book dragged for me in the first half. There are many reasons for this. Among them were the POV narrators that dominated it: Jon Snow, Davos Seaworth, and Tyrion Lannister. I found Jon and Davos’s chapters to be painful. I’ve never cared about Davos. I couldn’t care less about him and the seven sons he sired (four of which died on the Blackwater). Nor have I ever been enamoured by Jon’s emo brooding which here is further punctuated by Stannis Baratheon. Jon’s emo brooding + Stannis’s grim, humorless self = a sad and sorrowful Jia.

Before people jump on me regarding Tyrion, let me preface this by saying that I liked Tyrion before this book. I really enjoyed his character. I think his portrayal is one of the highlights of the TV series. But then this novel happened and for what felt like far too long, I was told of whores, Tysha, whores, his father, and did I mention whores? We get it, we get it. Tyrion, what happened to you? Everyone is after the Imp because of the price on his head, but I barely saw any sign of him in the first half of the book.

And then there are Danaerys’s chapters. Oh Dany. I really want to like her storyline. It’s one I love: girl rising up from the dirt to become a fierce and awesome woman. It’s empowering. In a genre where female characters didn’t really come into their own until the last couple decades, and even then that can be debatable at times, I have yet to get tired of this narrative type. And after everything that’s happened to Dany, what’s not to like about it? But like many other epic fantasy tropes, I guess you wanted to subvert that storyline too?

I honestly felt like Dany was a mess in this book. I won’t argue that it wasn’t realistic because it is. She’s young and hasn’t yet to learned to play the Game as well as we’d like. But I was so frustrated with her chapters because her character progression was dreadfully slow and I thought she should know better. How many times has she been betrayed? She even has a prophecy to guide her along, but does she do anything about it? No, she just waits for the next person to betray her even though she knows it’s coming. That’s not attractive in a character at all. In the end, I got the distinct impression she was being obtuse for the sake of being obtuse, as in “the plot required her to be stupid and so it shall be!”  It also didn’t help that I found her taste in men atrocious. So it wasn’t until her final chapters in the novel that I enjoyed her storyline.

I wish I could say ADWD didn’t fall into the epic fantasy trap of introducing more POV narrators and characters, but I can’t. The latter is unavoidable so I expected it, especially in a world and series as large scale as this, but I really could have done without the former. I couldn’t care less about Greyjoys, lost princes and people who want to marry Dany in order to use her for their own ends. I just want the core group we met in A Game of Thrones. That was plenty. Apparently that’s just too much to ask.

Despite the initial premise that ADWD would cover only the characters not included in AFFC, some chapters featuring narrators from the previous novel were included. I didn’t have a problem with that myself, because it helped break up the monotony and at times, sped up the plodding pace.

In the end, it’s the pacing that bothered me most about ADWD. I’ve always considered you to be a master of pacing, even if part of that style meant fake outs and gimmicky cliffhangers. It worked for me and I was never bored. I was bored for stretches of this novel. Parts of it dragged and other parts were repetitive. For all that I poke fun at the portentous foreshadowing that characterizes A Song of Ice and Fire, I’ve always liked that aspect of the series. But in ADWD, I found the writing as unsubtle as a pile of anvils dropped on my head. I don’t know if that’s a result of the long interval between installments. Maybe someone in the chain was worried that we wouldn’t recall the details. After all, some people haven’t read about these characters for eight years. But it failed for me here.

So was the wait worth it for me? Not really. Not for hardcover, and definitely not for rushing out on the first day to buy it and devour it. It’s yet more set up.  The plot doesn’t really move forward until the end and even then, it’s a tease of what could happen. This obviously isn’t the place to start for new readers. A Song of Ice and Fire isn’t a series you can pick up in the middle. You have to read it in order.

Will I continue reading the series? Probably. I’ve never had problems dropping a series if I grow dissatisfied with it, but I feel like I’ve invested so much time and effort in this series that I can’t stop now. I say this fully aware of the fact that it might be another five years before the next book comes out. Knowing what I know now, I can’t recommend this series to other people without many caveats. The wait between books is too long, and there is no guarantee it will be finished. At this point, I’m not even sure it’ll conclude in the promised 2 (or 3) volumes. Taken all together, this is a C.