REVIEW: A Brush of Darkness by Allison Pang

I’m a recovering burned-out reader of adult urban fantasy. These days it’s so difficult for me to pick up a novel in the subgenre and read it from beginning to end. But that doesn’t stop me from trying because the perpetual optimist in me still hopes to find that novel that’ll make me love the genre again. Or at least willing to tolerate its foibles. I picked up your debut because I thought the cover was cute in a roller derby-ish sort of way, and it was a nice change from all the tough, gun-toting chicks in leather. 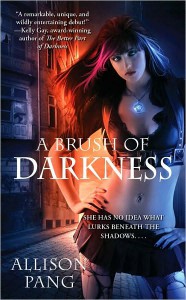 Abby Sinclair is a former dancer picking up the pieces of her life after a tragic car accident killed her mother and put a metal plate in her head. These days, she’s the TouchStone for Moira, the local Faery Protectorate who makes sure contracts between humans and fae remain on the up and up. TouchStones are basically humans who allow the fae they’re contracted with to traverse between the mortal and faerie realms.

The problem? The last time Abby saw Moira was a few months ago when her boss left a note on her office door, saying she’d be back soon. Not even Moira’s bodyguard knows where his charge went and to make matters worse, Abby isn’t the most knowledgeable about the ins and outs of Faery. People don’t know Moira is missing and if they did, Abby would have her hands full.

Then a complication walks into her life, in the form of an incubus named Brystion. Brystion is looking for his missing sister, the succubus Sonja. He has no issues with using his sex appeal to get Abby to help him but that plan backfires when Abby inexplicably becomes his TouchStone. Considering that she was already Moira’s TouchStone, such a thing shouldn’t be possible. It’s also dangerous because being a TouchStone is draining on a human and Abby’s strange ability to become the TouchStone for multiple fae could potentially kill her.

When Abby agrees to help Brystion, she learns other succubi have gone missing. Their only clue is a painting of Sonja, done by an artist who’s also painted Abby and some of her friends. But when she tries to find out more from the artist, who’s also a friend of hers, he mysteriously becomes unavailable. And what Abby and Brystion soon discover is that the paintings, the missing succubi and even the vanished Moira are all connected.

This was a nice change of pace from the wisecracking loners with attitude problems. Abby is not your stereotypical kickass urban fantasy heroine. She’s not confident. She’s way out of her depth. She’s ignorant of the workings of Faery, which is unfortunate because everyone else thinks she knows more than she lets on.

I also liked how the book didn’t take itself too seriously. It retained a sense of humor, which is something that can be lacking in the subgenre at times. For example, the unicorn. I know some readers will find the unicorn very cracky and I’m not denying that he was but he was a nice subversion of the sparkly and glittery unicorn stereotype. And I say this as an unrepentant unicorn hater.

At the same time, I felt like the book was overloaded with lots of characters and creatures, not all of which were really necessary to the plot. It’s not that I believe every single character and creature must have an important, significant influence on the plot, but there was so much going on that it was distracting at times. I did like that Abby had friends because if there’s one thing I hate about urban fantasy, it’s the genre’s fondness for loner heroines who have no female friends. But at the same time, I felt like the friends solely existed to help Abby along rather than had fully fleshed out lives of their own.

The book’s biggest weakness for me was Abby’s relationship with Brystion. Its development did not feel organic to me. I didn’t think there was any chemistry between them. And for an incubus, I found Brystion’s sexiness (because incubi should be sexy, right?) to be perfunctory. The best way I can put it is that I felt like Abby and Brystion were attracted to each other because that was expected of the genre: urban fantasy heroine + mysterious hot guy = sexytimes! It all read as very forced to me.

The other issue I had with the book was the focus on dreaming. I realize that’s a key to Abby’s character and I did like how that aspect of the incubus mythos was brought up, when more often than not, it’s the sexual aspects that are the focus in other fictional works. On the other hand, it gets very metaphysical and psychological towards the final third of the book. For me, the allure of urban fantasy is finding the magical and the supernatural grounded in the everyday, mundane world. When you take away the mundane and lose the grounding in reality, I think you run the risk losing the reader. I admit I was very much not interested in the last third of the book for this reason.

A Brush of Darkness started off strong for me, enough so that it carried me through the end of the book. Unfortunately, I thought the book lost its charm as the narrative continued. I felt like the plot unraveled and turning points existed for convenience’s sake rather than being logical results of previous incidents in the novel. But for readers looking for some lighter urban fantasy fare, this might do the trick. C

→ Jia
Previous article: Is the guardian/ward trope an incest fantasy in disguise?
Next Post: REVIEW: How I Learned to Love the Walrus by Beth Orsoff