REVIEW: A Breath of Eyre by Eve Marie Mont

I purchased your book quite by accident. I was browsing through samples on my kindle and thought I would give yours a try since the topic was interesting and not overdone. While there has been a lot of Austen-esque retellings, I haven’t seen many for Bronte works, and thought why not. When I finished the sample, I meant to click on ‘See More Information’ and instead clicked purchase. Oops. I decided to read the book, and found it interesting for the most part, but flawed. 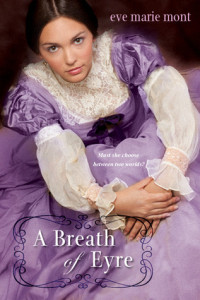 A Breath of Eyre pitches itself as a time-travel in which Emma, modern teenager, finds herself thrust into Jane Eyre’s life. I expected this to be a romantic piece and was more surprised when it seemed to be about self-empowerment and a struggle with depression more than anything else. Emma is a lonely student sent off to an expensive prep school that she hates. Her mother killed herself some time ago and her father has been distant. Emma is not popular and struggles with the cliques at her school and her abrasive roommate is even less popular than herself. She has a crush on the son of a family friend, Gray, and is also harboring a small tendre for one of her teachers.

I read this expecting Emma to be immediately thrust back into time and to live her life out as Jane, but this didn’t happen for quite a while. Instead, the reader is entrenched in Emma’s daily life: her classes, her friendships, her crushes. Despite the misplaced packaging, I was drawn into Emma’s struggles to fit in. When the scenery eventually changed to her life as Jane Eyre, I was startled and not all that pleased. Emma’s life felt plenty interesting without the time travel.

In fact, it seems odd to say it, but the time travel as Jane felt like the weakest part of the story. Emma goes back and forth between her life and Jane’s multiple times in the book. Every time it switched, the story, while never fast paced, slowed down to a crawl. I had to force myself to finish each section of “Jane Eyre” because it was boring. Nothing seemed to happen and there was no tension, not even between “Jane” and Rochester. I was relieved when the story switched back to modern Emma, and annoyed every time she went back in time.

This story is pitched as a romantic time travel version of Jane Eyre, and I have to say that the packaging is all wrong. I’m not an Eyre or Bronte fan, but it seemed to me that reading this book, neither were you, the author. Instead, you felt a need to give it a feminist slant. You gave Jane/Emma more power, had your own unique twist for Mrs. Rochester in the attic, and did your best to dissolve the romance with Mr. Rochester (who also conveniently resembled the somewhat-creepy teacher Emma has feelings for). While there were interesting twists from an empowering perspective of things, I do wonder if Eyre fans will be disappointed at this turn.

In addition, this seemed to be less a work about romantic time travel and more a treatise on depression and how to work through it. Emma suffers from depression at the beginning of the book. Her mother killed herself due to depression. Her roommate at college is suffering from loss and has pulled away from everything she once loved. Later in the book, another character suffers from depression. This felt a bit overwhelming and added to the overall dragging feeling of the story. While I applaud you for trying to show depression in a compassionate light, I cannot help but feel that this was not the best story choice. The nature of depression is that someone withdraws into themselves and spends hours (or days) on end doing nothing. This does not make an exciting story. Emotional, yes. Exciting, no.

Despite my nitpicks, I did feel like the characters were layered and nuanced. I liked that Emma was not perfect and that you tried something different with this story. Even if it didn’t work all the time, you pulled everything together at the end and tied it up neatly. There’s even a sweet HEA for Emma that doesn’t involve her teacher, for which I am utterly thankful. It ends on a hopeful note and Emma, who had previously been meek and mild and frightened, has turned into a strong, empowered character. I really enjoyed that storyline. Actually, I would have enjoyed the entire book a lot more if it hadn’t been for all that time travel plot, which sounds strange to say.

One last distressing point that I feel I must point out. Because every young adult book must now be a trilogy, there’s an extended preview at the end of A Breath of Eyre in which it shows that Emma next goes back in time through The Scarlet Letter and lives through Hester Prynne. I groaned at the sight of this, because I felt it destroyed the HEA that was so difficult for Emma to achieve at the end of this novel. I won’t be reading that book. I felt as if Emma was in a happy place at the end of this novel, and I’d like for her to stay there. I give this a C.