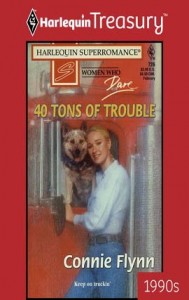 Harlequin’s Treasury reissues are allowing me the relatively easy opportunity of trying some authors completely new to me without having to laboriously track down their OOP books. While scanning the offerings at their website, your book “40 Tons of Trouble” caught my eye because of the heroine’s occupation. I can’t recall ever reading about a female big rig, long haul driver so with a click of a button the chance to remedy this was mine.

Cat DeAngelo lives for the road which is a good thing since her family business is a trucking company. She’s never more happy than when she’s out driving truck in her shiny, cherry red Peterbilt. But lately family issues are beginning to take their toll. Her younger brother has quit business college and wants to drive instead of eventually handling the company finances. Her younger sister is stressed as the office manager and their mother has been diagnosed with early onset Alzheimer’s. So after Cat gets into yet another argument with her brother and he quits right at the start of a cross country job, Cat has had about enough.

When Ricky Steele responds to her job notice at a truck stop and seems to be reliable and has a commercial driver’s license, Cat reads him a list of the company policies and off they go. But Rick isn’t quite who Cat thinks he is though his name rings a bell. He’s actually the owner of a local trucking business but has his reasons to sign on for the cross country trip and back. As the miles roll under the truck wheels, the two start to get to know each other though Cat still doesn’t tell Ricky about the dirty tricks she suspects that another trucking company owner has instigated in order to force her to sell DeAngelo Trucking.

When several incidents occur that nearly get Cat and Ricky killed, the truth comes out along with those pesky details Ricky has been meaning to tell Cat all along. Can their blossoming love survive the revelations or will that and DeAngelo Trucking fall prey to a greedy owner, a man out for revenge and a surprise enemy Cat never suspects?

I don’t know anything about driving an 18 wheeler beyond the fact that it seems like a job that takes a lot of skill. This book taught me a lot but it’s done in such a way that it becomes an integral part of the story instead of merely being a boring recitation of facts of life on the road. Cat is good at what she does and her love of the job and the life are evident from start to finish. It would take a tough woman to make it in this world and Cat is one strong lady. She’s also stubborn to the point of idiocy at times and more than once I wanted to smack some common sense into her.

Ricky gets frustrated with her and I did too. Her reasons for her obstinacy about refusing to sell the company or stop driving make sense based on the background you’ve given her but when she pushes on in the face of attempts on her life that, for all she knows, aren’t finished yet, I was taken aback. Preserving your on time record is one thing but not getting yourself killed is another. There were also a few “inappropriately timed” moments of hot sexing that I found slightly ridiculous.

One villain is immediately known but the other one and the inside snitch took a while to be unmasked though I did catch onto their identities before they were officially revealed. It makes sense who they are and one of them serves as a believable source of conflict in Cat and Ricky’s growing relationship as does the Big Mis which could be seen coming a mile away.

The romance is quick but Cat and Ricky basically live together in a box for a week and the fact that they’re both in the same business probably tells them a lot about each other so…okay. And you don’t have them rushing down the aisle after the I-love-yous which also makes a difference. Usually once a romance couple falls in love, they’re portrayed as eternally happy so the rip roaring “differences” that Cat and Ricky are mentioned as having up to and after their marriage are a touch of reality not often seen in the genre and one that I found slightly refreshing.

Cat isn’t always an easy character to like but she does stay consistent. Even though it takes until the very end of the book, she also grows and learns from what happens and does make changes in her life. There was a point when it appeared that Ricky might try and strong arm her into giving up driving but luckily for my liking of the book he backs off somewhat and just presents her with options which allow her to make her own decisions. I didn’t fall in love with this book but it is an interesting peek into a career I knew little about and features a strong – though at times too stubborn for her own good – heroine. C+