REVIEW: “I Do” … Take Two! by Merline Lovelace 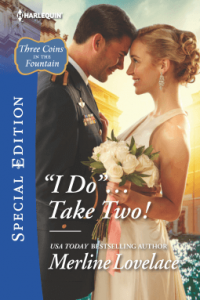 A Roman reunion isn’t on Kate Westbrook’s itinerary when she arrives in Italy. After all, she’s flying solo on the vacation she’d hoped to share with her soon-to-be-ex. But when Kate tosses a coin into the Trevi Fountain, her deepest wish—a second chance with her gorgeous pilot husband—might come true…

Travis knows his dangerous missions broke up his marriage, but he’s determined to win back his wife. How can Kate resist the magic and moonlight of Venice, followed by a passionate interlude in a sun-drenched Tuscan villa? Now, instead of dodging missiles, Travis faces a far more daunting challenge: proving to the woman he adores that their love is as enduring as the Eternal City itself.

With so many romance books out there now about OTT SEALs, black op squads and super secret government agencies, I see your books as a breath of military reality. You’ve lived the life and know the world and I trust that things will be at least closer to how it truly is.

This is a second chance at love with a military husband determined to get his beloved wife to reconsider filing for divorce. So much here seems sadly realistic. Travis is dedicated to his marriage but his career in the Air Force has taken its toll. Kate isn’t a stay at home wife and has rocketed up in her financial career, earning accolades that fill Travis with pride even as he worries that he might have waited too late to try and change her mind.

I can tell that you’re writing what you know about military marriages and the effort it takes to keep them going as well as the travelogue details of the places Kate and Travis see in Italy as well as the food they eat and historical banking information. I have to admit that some of these come off sounding like a nice brochure /website advert.

Travis isn’t just talking the talk in his efforts to get Kate to reconsider. He puts it on the line and does it publically. He goes big and even if he startles Kate with his civvie job offer, she certainly doesn’t doubt he’s for real about it.

Halfway into the book, Kate goes with her gut+heart+instinct and they’re back on course. So, what was the rest of the book about then? Um, babysitting and two possible mini-romances. Hmmm, okay but not quite what the blurb promised. Plus neither of the other romances were even finished, even came close to me thinking “hey, there’ll be a sequel to tie things up.” The fantasy, 5 star hotel, exclusive this and moneyed privilege that also, strangely, got tiring. I guess after you’ve read about one super expensive, “pamper the guest at any cost” hotel, you’ve read enough. Or I had as I wanted more of Travis and Kate’s relationship.

The first half of the book is good as it focuses on Kate’s real grievances, the other things that had slowly driven this couple apart and, first Travis but then the both of their efforts to put things right. Then it detoured into everything but them plus a lecture on the first bank in Italy before a few trips to the hospital. Maybe a C then for half and half.