REVIEW: Rescue Me by Jaci Burton

I really struggled with your letter. I have viewed small print publishers, particularly epublishers, in a lesser light than mainstream NY publishers. I have also wrongly felt that the small eprint publishers were all the same – churning out romantica and literotica. In writing you this letter, I felt that because you were published by one of these epublishers perhaps you deserved better, gentler treatment. Ultimately, I thought to do so would be a disservice to you and your publisher. 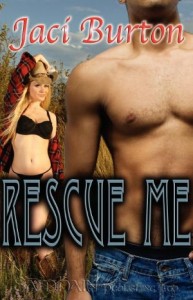 The plot of your book was fine and was what provided the impetus to purchase it. Sabrina Daniels has money to invest and wants to learn how to run a ranch. Kyle Morgan’s family’s is on the verge of losing the ranch without money. Morgans agree to accept a fee for teaching Sabrina all about ranching. Upon arrival at the ranch, Sabrina and Kyle are instantly attracted to each other and while that doesn’t bother Sabrina too much, it really bothers Kyle. The story starts off fun and flirty: Sabrina arrives while Kyle is working under a truck. He’s so stunned by her appearance, he is virtually speechless:

“Are you Kyle Morgan?”

I don’t know. Am I? He seemed unable to think about anything except the vision standing in front of him. “I guess I am.” Great answer, dumbass. Sunstroke, obviously. Normally he had a freakin’ brain cell.

But I never see self-effacing Kyle again until about page 237 of 247. All I see is asshole Kyle who is always recognizing his asshatishness a day late and a dollar short.

Another area which really got to me were the unexplained issues or the issues I felt were unbelievable. Kyle had a bad divorce and had to pay his cheating ex-wife 1/3 of the value of the ranch. I find this hard to believe. His family members were all co owners in the ranch. At best, his ex-wife would be due 1/2 of Kyle’s 1/3 making it 1/6 of the value of the ranch and many states have dower laws making a wife’s interest in family land limited to some amount. I see this time and again in books and I hate it. It is so unrealistic.  And why did Sabrina get all her money from a divorce? Why did she want to ranch? How do you go from beauty queen to trophy wife to wanting to ranch?

The villians, Jackson Dent (nieghbor) and Amanda (ex-wife), were caricatures and not three dimensional. I think the more human that you can make your villians, the more depth to the story. Or just eliminate the villians altogether. The threat to the ranch was conflict enough. The villians were completely unnecessary and just served as a display of Kyle’s ability to be a complete and total prick.

The story itself is full of cliches and overexaggerations but it isn’t the cliches that drag the story down. One of my favorite books is Duncan’s Bride featuring the surly Reese and the sunny Madeliene.

The difference in the two books is the heroine. Madeliene could give as well as Reese. I never felt that about Sabrina. I understand that being meek was part of her character makeup and her striking out on her own was part of her character growth, but I never felt Sabrina being strong. Maddy fought for what she believed was hers. She could hold her own with Reese. I think Sabrina would always be a lesser in the relationship with Kyle, that they would never be equals.

On the one hand I didn’t see anything in your book that differentiated you from a big print publishing author. On the other, I guess I wanted to. This book was a C but I am going to try you again.