Janine: The Larks Still Bravely Singing begins when Robert Montagu and David Callahan reunite after being invalided from the battlefields of World War I. 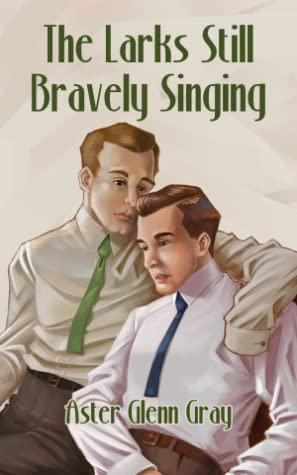 Robert and David both attended the Abbey, an English boys’ boarding school. As members of the same natural history club, they rambled along the countryside and sometimes tussled. When Robert realized that David felt the same spark he did, he feared he would corrupt David and pushed him away (I wasn’t clear on where that idea came from—maybe because David being was younger, orphaned, new to England, and attracted to girls too?).

World War I broke out and Robert shipped out first. He and David served in separate regiments and they only meet again when each ends up in Montagu house, Robert’s parents’ country estate, which now serves as a convalescent hospital.

By this point, Robert has lost a leg and David a hand. After running into each other in the library they start meeting regularly to talk about books and school memories. Robert kicks himself for rejecting David when they were schoolboys and decides to pursue him. But although they have great conversations, David gives no sign that he is interested in Robert romantically or physically. When Robert subtly tests the waters, David shies away.

The friendship holds, though, and when David leaves, they correspond and plan for Robert to visit David in Cornwall. But the Great Flu arrives before the visit. David falls ill and the last of his elderly aunts dies, leaving him with only her cats. David’s letters become sporadic and Robert worries about him.

When Robert finally comes to Cornwall, David is much changed. He experiences anxiety and is overwhelmed by minor things. Robert wants to help but has his own insecurities. During the war, he cheated on his longtime lover, Cecil, many times. When he finally confessed, Cecil was devastated. Cecil died in battle, and now Robert thinks that if they get close, he may harm David as well.

David is conscious of his vulnerabilities and worries that they will scare Robert away. Everyone in his life has died or left and he has almost no one. With his confidence shattered, what good is he? What can he contribute to Robert’s life, or anyone’s?

I’m curious to hear what you thought of The Larks Still Bravely Singing, Sirius. It’s the only one of the five Aster Glenn Gray books I’ve read that didn’t work for me. I had multiple problems with it and I’m not sure I would have finished if I hadn’t loved a few of Gray’s earlier books.

The book felt very slow. Almost nothing happens other than that these two men are too much in their own heads, each getting in his own way. I have no problem with that as a conflict per se and it’s enough by itself to drive a novella. But this is a short novel and it needs a bit more conflict and plot than that.

Sirius: Agreed. The book did feel very slow and when I started rereading it before doing our review I did feel a little bored, but when I read it initially it worked for me quite well. Again, normally I do need more conflict and plot but occasionally the books like this one work for me, at least for the single read and this is a good example.

Janine: A second problem I had was with the writing. The author laid the period Briticisms on too thick for my taste, as if she were putting up a “1919 Britain!” neon sign. Even David, who was American, used a lot of period British speech tics like “awfully” and “ripping.” Robert frequently addressed David as “dear boy” or “old chap.” The thickness of the speech mannerisms made the characters (Robert especially) ring false.

Sirius: This one is funny. I did not recognize period Briticisms as being laid too thick, I was thinking oh sounds British good enough for me , more importantly though writing in her other book I have read that we reviewed together was almost too simple for me. I did realize of course that one needs skill to make it sound too simplistic and it was an artistic choice, but still I could not help the way I felt. Here her style worked better for me, because I thought that for two British men the restraint in writing worked better.

Janine: That’s a good point and one that I didn’t think of.

My biggest issue was that I didn’t like Robert and the way he and the author handled the power gap (Robert was of a higher social class and less traumatized/made vulnerable by the war). For a romance to work I need to feel that even if the relationship starts out unequal it has equalized by the end. I thought Robert was condescending and at times classist, and that doesn’t change much.

Robert swallowed any number of dark remarks on the theme “Blood always tells.” Thatcher’s people had come up in trade, for all that his father was a barrister.

Further, Robert calls David “Old boy,” “My sweet boy,” “My beautiful boy,” “Cheeky boy,” “Darling boy,” – the paternalism is blatant. Robert wants David to sit at his feet, and David wants to sit at Robert’s feet. Sometimes Robert even scratched the back of David’s neck and behind his ears, and sometimes David curled by the hearth. I felt like I was reading about a loyal dog and his benevolent master and it made me squirm.

Beyond this, Robert also has a definitive concept of who has what role in their relationship. Exclusive English boarding schools had a social system where the younger boys were subservient to the older ones. That’s accurate and research-based (though I don’t know if it extended to romantic or sexual relationships in real life), but David and Robert were a few years out of school when they reunited and the war should have matured Robert enough for him to see past these roles. Instead, we get this:

“And really,” Robert added, “It’s the older boy who’s supposed to approach the younger. That’s why I froze up: simply shocked at your appalling display of cheek…”

He didn’t seem to fully grasp the rules governing relations between lover and beloved, to understand that he was really meant to let Robert take the lead

How did these rules come into their new relationship? How is it “cheeky” for David to make the first move? Maybe that line is supposed to read as flirty or hot but it backfired with me.

Then, too, Robert feels that he has a responsibility to guide and shepherd David through life and through his sexual experiences, to take responsibility for David’s feelings, choices, and moods, to fix whatever might be ailing him. This could be a sign of caring or taking empathy too far, but it also diminishes and infantilizes David. Robert should be viewing his lover as an adult who is capable of taking responsibility for his own life. To view himself as the one who should determine what’s best for David is a lot of presumption and it bothered me that the author didn’t challenge that more.

Eventually, David called Robert on his management and we got a confrontation between them, but I was disappointed when the author chose not to treat it as seriously as I felt it deserved. I saw Robert’s attitude as a glaring issue and I wanted it to have real consequences for Robert, consequences that would force him to acknowledge that his approach was marring their relationship and prod him to change his behavior.

Sirius: Have you read the book “My beautiful boy”? Letters collections between some famous men and their lovers? I wonder if author read this one and decided that such pet names were widespread enough in gay relationships?

Janine: I know these endearments were not uncommon in this period. Maybe this was just more of the overdone period language, but the frequent use of “boy” was didn’t work for me because of the context of class difference and Robert telling David to fetch him a drink or put his shoes out.

Sirius: I don’t disagree with anything you wrote once again, but it did not bother me I suppose. First because I did not quite view it as a power imbalance. I viewed it more as Robert trying to guide his less experienced lover and never once I felt that he made David do something he did not want to do. Hesitating for that long to even kiss him, etc. I thought it was very deliberate that David kissed him first and I did not feel that David did not consent to anything they did you know?

I also think that confrontation between them did happen in a way that worked for this couple. David to me was perfectly clear as to what he wanted (continue the relationship with Robert) and I thought he was loud and clear to let Robert know.

Having said that, I wonder if with all the rules about lover and beloved author may have wanted to show that as much as David was seemingly more psychologically hurt by the war out of the two, that Robert’s development was also stunted somewhat and he is stuck on the rules of relationship from boarding school.

I liked David a lot. There was a warmth to him and he was a good man, loving and honorable. I found him attractive for his love for his cats and his elderly aunts (including the sour one), his playing pirates with the vicar’s children, his kindness to fellow students who had no other friends. He was almost too nice. I liked his physicality too; his golden hair, his tussling with Robert, his early morning swims.

I’ve noticed in more than one book lately that some authors focus on a character’s shyness more than I like, with much attention given to blushing and ducking of the head. A little insecurity can be sexy in some contexts, but it can be taken too far.

Sirius: I liked David too, but he was almost too good for me if that makes sense.  I thought his traumas made sense, but it did feel like a bit of too much trauma.

There were things I liked. There was depth to the past conflict between Robert and Cecil and I was impressed with how much the author was able to make me forgive Robert his infidelities (I don’t want to spoil what that was about but it was fresh and the reveal was well-executed). As well, physical disabilities were treated matter-of-factly. The epistolary aspects (David’s letters and a short story) were lovely, too.

Sirius: I liked those things too.

Janine: To sum up my feelings, Aster Glenn Gray has considerable skills, and while I was not a fan of The Larks Still Bravely Singing I will continue reading her books. What is your grade for the book, Sirius? It’s a C for me.

Sirius: Overall it worked better for me than for you. I will give it a B.

→ Janine
Previous article: REVIEW: The Great Gatz by Lauren Baratz-Logsted and Jackie Logsted
Next Post: Reading List by Jennie for July through September