I read Ried’s Gold Ring of Betrayal and The Bellini Bride after Dear Author’s recommendation several months ago and enjoyed them.  When I saw that some of Ried’s backlist was being republished I purchased Marriage on the Rebound.  I enjoyed the angst and the occasional humor in the story.  I even liked Rafe once some of the back-story was revealed.  What annoyed me was that the heroine in this book is not as strong as Ried’s others.  Shaan is almost ‘too stupid to live’. 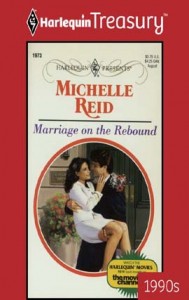 The story starts with Shaan reeling because her fiancé, Piers, has not just jilted her but also married another woman. His brother, Rafe, broke the news to her.  He promptly takes over in typical alpha fashion and suggests that the best solution is to marry him. She completely shuts down after being jilted (believable) but allows Rafe to take over (?).  Now I know Rafe is THE ONE but Shaan does not know this.  She fully believes that Rafe does not like her because of her mixed heritage (her father was Lebanese) and she definitely uses the word racist to describe him.  On top of that belief, she knows that Rafe never wanted Piers to marry her and did everything in his power to stop the wedding. Yet she allows him to convince her to marry him and go to Hong Kong.  Oh, she also lets him DRUG her (It is just over-the-counter sleeping/relaxation aid, baby) because she is not dealing with the jilting well.  Her ability to judge character is either genius or suicidal.  If this was not Romance-a-land bad things would be happening.

They get to Hong Kong and Shaan grows a bit of a backbone and she starts to think. She realizes that Piers has always been an ass but she cannot figure out Rafe.  Then sex happens with Rafe and her thought processes are disrupted again.   They agree to try to make the marriage work because the sex is fabulous. Hilariously, Shaan is not sure of this because she was a virgin but Rafe assures her that the sex is special (Clue that Piers did not love her=Virginity intact).

Eventually, she realizes that Rafe’s goal is to not allow her to think at all about his brother or why Rafe married her. This goal makes it so that Shaan can only use her ineffective people reading skills to figure out Rafe’s motivations.   She comes to the conclusion that Rafe married her to get revenge on Piers for marrying the woman Shaan thinks Rafe loves.  Rafe lets her believe this because the truth would hurt his pride.  Reid has dropped enough clues by this point for readers to figure out that Rafe fell in love with Shaan at first sight.  Their first meeting is a classical ‘meet cute’.  Shaan cannot figure this out.

Once back in England, things climax when Shaan sees Rafe and Piers’ wife standing outside of a hotel and comes to the conclusion that Rafe still loves his brother’s wife and not her. Rafe finally decides that Shaan cannot figure out the truth so he has his ass of a younger brother tell Shaan the story.  Piers has always been jealous of Rafe and when he realized that Rafe loved Shaan he used his charms to woo her to the point of marriage (but he did not sleep with her because that would have been too evil). To save Shaan from marrying Piers, Rafe begged him to let Shaan go. Shaan is moved by Rafe’s actions to get her to love him.  Finally, she apologizes to Rafe for her inability to draw correct conclusions and Rafe admits that it was easier on him for her to believe her misconceptions.  HEA
Angst-O-meter for Ried’s books that I have read (1 being the highest):

1. Price of a Bride
2. Gold Ring of Betrayal
3. The Bellini Bride
4. Marriage on the Rebound